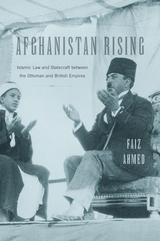 Debunking conventional narratives of Afghanistan as a perennial war zone or marginal frontier, Faiz Ahmed presents a vibrant account of the first Muslim-majority country to gain independence from the British Empire, form a fully sovereign government, and promulgate an original constitution after the fall of the Ottoman Empire.

Far from a landlocked wilderness, turn-of-the-twentieth-century Afghanistan was a magnet for itinerant scholars and emissaries shuttling between Ottoman and British imperial domains. Tracing Afghans’ longstanding but seldom examined scholastic ties to Istanbul, Damascus, and Baghdad, as well as greater Delhi and Lahore, Ahmed vividly describes how the Kabul court recruited jurists to craft a modern state within the interpretive traditions of Islamic law and ethics, or shariʿa, and international legal norms. Beginning with the first Ottoman mission to Kabul in 1877, and culminating with parallel independence struggles in Afghanistan, India, and Turkey after World War I, this rich narrative explores encounters between diverse streams of Muslim thought and politics—from Young Turk lawyers to Pashtun clerics; Ottoman Arab officers to British Raj bureaucrats; and the last caliphs to a remarkable dynasty of Afghan kings and queens.

By unearthing a lost history behind Afghanistan’s independence and first constitution, Ahmed shows how debates today on Islam, governance, and the rule of law have deep roots in a beleaguered land. Based on research in six countries and as many languages, Afghanistan Rising rediscovers a time when Kabul stood proudly for anticolonial coalitions, self-determination, and contested visions of reform in the Global South and Islamicate world.

REVIEWS
Afghanistan Rising uncovers the lost history behind the first constitution of Afghanistan and that country’s evolution into a modern Islamic state. Ahmed provides highly original insights into Muslim legal history, modernization in non-European contexts, and transnational Muslim networks. Exploring the ideological and social factors that shaped Afghanistan during an age of turmoil and transformation, the work is conceived on a broad scale. This is a well-crafted, theoretically rich, tightly argued, and rigorously executed book. In addition, its lucid style makes for enjoyable reading.
-- M. Şükrü Hanioğlu, author of A Brief History of the Late Ottoman Empire


This remarkable piece of research is based on archival materials in six different languages in six different countries…Among the themes that run through the work are: the role of an interlinked juridical network in fashioning Afghanistan’s first constitution; the fact that the ulema and scholars of the time were flexible and imaginative enough to develop the constitution using Hanafi jurisprudential techniques; and that in the process they produced a form of Islamic modernism to match, if not surpass, those produced in Egypt and India. This is essential reading for those interested in the late Ottoman world, the modern history of Afghanistan, and Islamic modernism.
-- Francis Robinson Journal of Islamic Studies


A groundbreaking book that will reorient the way we think about not only Afghan modernity, but also political and legal thought in Muslim societies during the twentieth century. Ahmed describes the emergence of a modern Islamicate region during the age of imperial globalization and demonstrates the appeal of multiple governance models in the ideas exchanged within this region among different Muslim publics. More importantly, he shows how Afghan kings experimented with novel legal and political models to assert their legitimacy while establishing on the global stage Afghanistan’s sovereignty as a modern nation state. The book persuasively shows us how Afghanistan’s transformation exemplifies a model of Muslim modernity that was not Eurocentric.
-- Cemil Aydin, author of The Idea of the Muslim World: A Global Intellectual History


Ahmed presents a very compelling, accessible, and beautifully written argument in his book. Drawing on Turkish, Afghan, and British archival sources, as well as material in Persian, Ottoman Turkish, Arabic, and Urdu, he is highly successful in recovering modern Afghan history from its relegation to the periphery of the Muslim world.
-- Simon Wolfgang Fuchs Die Welt des Islams


Ahmed produces a riveting, unexpected history…that is not aligned with standard narratives that we are more familiar with. By capturing the richness and urgency of the development of Islamic law in Afghanistan, Ahmed provides us with a poignant story of a dynamic Muslim-majority country not yet overwhelmed by colonial interests, on the eve of it being overrun by a surfeit of neocolonial jurisdictions.
-- Nurfadzilah Yahaya Comparative Studies of South Asia, Africa and the Middle East


If Afghanistan’s place in this wider legal canvas of Islamicate Eurasia was once poorly represented, we have Ahmed to thank for filling in the contours, and with such empirical and theoretical panache. No longer can Afghanistan be seen as merely the passive receptacle of Islamic legal ideas elaborated elsewhere and transplanted to the country, nor does it fit the mold of Kemalist Turkey and Pahlavi Iran. Now we are forced to think of the country as productive of new Islamic legal realities, which, though drawing inspiration from models originating in British India and the Ottoman Empire, achieved something unique.
-- Michael O’Sullivan Comparative Studies of South Asia, Africa and the Middle East


Ahmed has given us a rich, detailed, and engaging account of how developments in and between the Ottoman Empire and British India are necessary—though not sufficient—to understand developments in Afghanistan’s legal history. Afghanistan Rising is a book that should be engaged not only by scholars of Afghan or Ottoman history, but by anyone interested in the intricacies of Islamic law and the modern state.
-- Marya Hannun H-Net Reviews


An outstanding example of how a study, written not from the Orientalist perspective but looking at Afghan leaders seeking to locate a nation state within an Islamic World context, could have disabused Western policymakers of a host of simplistic fallacies.
-- Sir Roger Tomkys, former ambassador to Bahrain


Very few historians of modern Islam move beyond, as Ahmed does, the artificially constructed regions of area studies. In synthesizing sources not normally put together—Ottoman Turkish documents on Afghanistan alongside British ones, and Afghan treatises on Islamic law that receive little attention at all—Afghanistan Rising illustrates the fruitfulness of transregional historiography.
-- Amir A. Toft Law and History Review


The author’s exhaustive research uses British, Indian, Afghan, and Turkish sources. This important book is very well resourced and well written. Its research and conclusions should lead to the rethinking of the historical role of Afghanistan.
-- G. M. Farr Choice


We are still building the foundations for a critical, transnational, connected, global, and regional history of Afghanistan in the world, and Ahmed’s work is a significant contribution to that emerging scholarly project. Afghanistan Rising is bound to be of interest to scholars from a wide range of area studies and fields.
-- Marjan Wardaki Iranian Studies


Uses the drafting of the 1923 Afghanistan Constitution—the first for a Muslim majority nation [after World War I]—to not only offer an intellectual and legal history of the country, but also to provide valuable insights into the interactions within the Muslim world at the turn of the 19th century, when the West was gearing up for global wars.
-- K. K. Shahid Pakistan Today


This book provides a significant insight…into the role of Muslims from other nations in Afghanistan. It is an antidote to the many books we have that tell us what Westerner workers have done for Afghanistan.
-- Farrukh Husain Afghan Eye


Ahmed argues that at the turn of the 20th Century, Afghanistan attempted to create a modern, constitutional state within the Islamic law tradition. Very few Americans know about this historical episode, or why the attempt to modernize the country ultimately failed. This book looks to be a useful resource for scholars and policymakers.
-- Mark Movsesian Law and Religion Forum