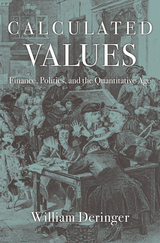 Modern political culture features a deep-seated faith in the power of numbers to find answers, settle disputes, and explain how the world works. Whether evaluating economic trends, measuring the success of institutions, or divining public opinion, we are told that numbers don’t lie. But numbers have not always been so revered. Calculated Values traces how numbers first gained widespread public authority in one nation, Great Britain.

Into the seventeenth century, numerical reasoning bore no special weight in political life. Complex calculations were often regarded with suspicion, seen as the narrow province of navigators, bookkeepers, and astrologers, not gentlemen. This changed in the decades following the Glorious Revolution of 1688. Though Britons’ new quantitative enthusiasm coincided with major advances in natural science, financial capitalism, and the power of the British state, it was no automatic consequence of those developments, William Deringer argues. Rather, it was a product of politics—ugly, antagonistic, partisan politics. From parliamentary debates to cheap pamphlets, disputes over taxes, trade, and national debt were increasingly conducted through calculations. Some of the era’s most pivotal political moments, like the 1707 Union of England and Scotland and the 1720 South Sea Bubble, turned upon calculative conflicts.

As Britons learned to fight by the numbers, they came to believe, as one calculator wrote in 1727, that “facts and figures are the most stubborn evidences.” Yet the authority of numbers arose not from efforts to find objective truths that transcended politics, but from the turmoil of politics itself.

REVIEWS
[Statistics] are center stage again now for reasons of both political conflict and epistemological uncertainty. Once again, some politicians wield numbers without any great concern about their accuracy or meaningfulness; the victory in debate is all that matters. Once again, given the profound changes in the structure of the economy, we can’t be sure what categories and methods will give us the understanding we would like. This is a terrific book for reflecting on contested and uncertain statistical terrain.
-- Diane Coyle Enlightened Economist


[Deringer] focuses on the early 18th century, with its increasingly vitriolic debates over government expenditure, taxation, and debt as well as the trade balance… Deringer tells these vivid stories with a richness of research that brings to life not only the events surrounding them but also the many famous characters involved. We can learn from the 18th century debate, he says, by promoting new and diverse computational approaches to stimulate public debate and offset what he fears is growing anti-quantitative sentiment.
-- Robert Heath Finance & Development


A thoroughly impressive work…[Deringer] recontextualizes the skepticism about numbers and suspicion of ‘experts’ in our time as something that has existed from the beginning rather than a recent disillusionment… A book this insightful about the past and with such a trenchant analysis of the present is a rare pleasure indeed.
-- Chris Dudley Journal of British Studies


Tells the coming-of-age story of (early) modern public fascination with numbers…A great book that should be on the shelves of everyone who takes history of economic thought seriously.
-- Gábor Bíró History of European Ideas


Highly original in its research, highly intelligent in its analysis, and highly sophisticated in its argumentation, there is much to impress in this book. Calculated Values resonates with our own financial obsessions.
-- Theodore Porter, University of California, Los Angeles


Engaging, learned, and beautifully written, Calculated Values is a major scholarly work. Deringer builds on his own experiences as a financial calculator to imbue material that otherwise might be a tad dry with a sense of wonder and adventure, not to mention an adroit sentiment of happy-go-lucky deceitfulness. It is a must-read for a wide variety of scholars and interested general readers—truly impressive and timely in the extreme.
-- Sophus A. Reinert, Harvard Business School


Deringer’s inspired and insightful book shows how mathematics and accounting mixed with politics to create modern finance. The story is so important, and yet, until now, has not been told. There is no way to understand the birth of economics without reading it.
-- Jacob Soll, University of Southern California


Shows how numerical calculation has both worked and failed in political life and what we can learn from it to help us use numbers more effectively in the future…A tour de force of intellectual and social history to explain how numerical thinking became the way to understand the world. Original in its approach and sophisticated in its argument.
-- Lee Trepanier VoegelinView

TABLE OF CONTENTS
Cover
Title Page
Copyright
Dedication
Contents
Preface: Quantification and Its Discontents
Notes on Style
Introduction: Political Calculations
1. Finding the Money: Public Accounting and Political Arithmetic after 1688
2. The Great Project of the Equivalent: A Story of the Number 398,085½
3. The Balance-of-Trade Battle and the Party Politics of Calculation in 1713–1714
4. The Preeminent Bookkeepers in Christendom: Personalities of Calculation
5. Intrinsic Values: Figuring Out the South Sea Bubble
6. Futures Projected: Robert Walpole’s Political Calculations
7. Figures, Which They Thought Could Not Lie: The Problem with Calculation in the Eighteenth Century
Conclusion
Archival Collections Cited
Notes on Printed Sources
Abbreviations
Notes
Acknowledgments
Index