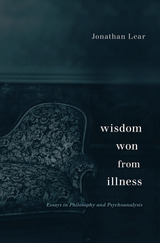 Wisdom Won from Illness brings into conversation two fields of humane inquiry—psychoanalysis and moral philosophy—that seem to have little to say to each other but which, taken together, form a basis for engaged ethical thought about how to live.

Jonathan Lear begins by looking to the ancient Greek philosophers for insight into what constitutes the life well lived. Socrates said the human psyche should be ruled by reason, and much philosophy as well as psychology hangs on what he meant. For Aristotle, reason organized and presided over the harmonious soul; a wise person is someone capable of a full, happy, and healthy existence. Freud, plumbing the depths of unconscious desires and pre-linguistic thoughts, revealed just how unharmonious the psyche could be. Attuned to the stresses of modern existence, he investigated the myriad ways people fall ill and fail to thrive. Yet he inherited from Plato and Aristotle a key insight: that the irrational part of the soul is not simply opposed to reason. It is a different manner of thinking: a creative intelligence that distorts what it seeks to understand.

Can reason absorb the psyche’s nonrational elements into a whole conception of the flourishing, fully realized human being? Without a good answer to that question, Lear says, philosophy is cut from its moorings in human life. Wisdom Won from Illness illuminates the role of literature in shaping ethical thought about nonrational aspects of the mind, offering rich readings of Shakespeare, Kierkegaard, J. M. Coetzee, Marilynne Robinson, and others.

REVIEWS
Lear takes a subtly radical position in Wisdom Won from Illness, arguing that psychoanalysis is not merely a venture one undertakes in the hope of relieving suffering (of achieving a level of contentment, of escaping symptoms of depression and anxiety), but in the hope of living well. This is one of the poignant qualities of this collection of essays: it asks more of humans than that they be content; it asks that humans not only live happily, but excellently. And it doesn’t merely hope for humans to do this, it expects it of them, and shows in clinical vignettes drawn from Lear’s private practice that the human need for truth—to understand ourselves and the world in which we live, and to be able to consciously marshal our unconscious life for our own development—is overwhelmingly powerful. Lear, like all great teachers, has the remarkable ability to remind us of this truth, even when this truth has gone out of fashion. Such a grand expectation for human life belongs, traditionally, to philosophy, not to psychoanalysis, but in Lear’s hands psychoanalysis is unique in that it can do the healing work of medicine and the enlightening work of philosophy.
-- Benjamin H. Ogden Times Literary Supplement


Bracingly unorthodox…One of Lear’s great contributions is his attentiveness to the power of trauma, and to the possibility of healing by working through the process of mourning…Facilitating communication between philosophy and psychanalysis, Lear has once again performed his own therapeutic action by inviting a harmonious conversation between the rational and irrational parts of the soul.
-- Robert Kehoe III Education & Culture


Jonathan Lear writes about a diverse range of topics with a steady mix of persuasion and provocation… His inventive interpretative moves, to bring out an epistemic radicalism in the allegory of the Noble Falsehood,…add up to an absorbing and quite startling piece of philosophy… This excellent volume is filled with finely developed and irreducibly particular insights that deserve to be read on their own terms.
-- Brian O’Connor Notre Dame Philosophical Reviews


What resources does psychoanalysis provide for those who seek to understand their lives in broadly Aristotelian terms? Jonathan Lear has given an unusually interesting and insightful answer to this question.
-- Alasdair MacIntyre, University of Notre Dame


Jonathan Lear looks towards a day when psychoanalysis and philosophy will be complementary parts of a single practical endeavor in which we fashion our lives. This book shows us Lear’s mind at work—developing, deepening, connecting, and extending themes from his earlier books, and striking out in rich and exciting new directions. This book will be useful not only for philosophers interested in psychoanalysis and analysts interested in philosophy, but also for anyone interested in the question of how reflection and conversation might change our lives for the better.
-- Adam Leite, Indiana University, Bloomington


This book makes original, insightful, and important contributions to the interpretation of Plato and Aristotle, to philosophical psychology in general, and to psychoanalysis and the philosophical issues that arise out of it. The broadly composite models of the psyche presented by Plato and Aristotle are investigated in a highly original and fruitful way. The importance of the issues they present is never merely antiquarian. Lear is committed to the vital relevance of these works to our own understanding of what is important about the life of an embodied human soul.
-- James Doyle, Harvard University