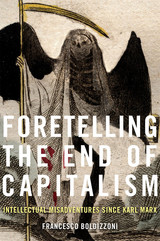 Intellectuals since the Industrial Revolution have been obsessed with whether, when, and why capitalism will collapse. This riveting account of two centuries of failed forecasts of doom reveals the key to capitalism’s durability.

Prophecies about the end of capitalism are as old as capitalism itself. None have come true. Yet, whether out of hope or fear, we keep looking for harbingers of doom. In Foretelling the End of Capitalism, Francesco Boldizzoni gets to the root of the human need to imagine a different and better world and offers a compelling solution to the puzzle of why capitalism has been able to survive so many shocks and setbacks.

Capitalism entered the twenty-first century triumphant, its communist rival consigned to the past. But the Great Recession and worsening inequality have undermined faith in its stability and revived questions about its long-term prospects. Is capitalism on its way out? If so, what might replace it? And if it does endure, how will it cope with future social and environmental crises and the inevitable costs of creative destruction? Boldizzoni shows that these and other questions have stood at the heart of much analysis and speculation from the early socialists and Karl Marx to the Occupy Movement. Capitalism has survived predictions of its demise not, as many think, because of its economic efficiency or any intrinsic virtues of markets but because it is ingrained in the hierarchical and individualistic structure of modern Western societies.

Foretelling the End of Capitalism takes us on a fascinating journey through two centuries of unfulfilled prophecies. An intellectual tour de force and a plea for political action, it will change our understanding of the economic system that determines the fabric of our lives.


Is this the beginning of capitalism’s end? If you think it might be—whether you are eagerly awaiting capitalism’s collapse or anxiously anticipating it—Francesco Boldizzoni’s new book…will make you think twice.
-- Alyssa Battistoni Boston Review


Boldizzoni has a deep familiarity with the thinking of both the anti-capitalist left and the pro-capitalist right, and his discussion of the intellectual evolution of various factions within both camps is superb.
-- Ryan Cooper Washington Monthly


Lively and wide-ranging…Moves briskly across a century and a half of intellectual history, from Marx and John Stuart Mill in the mid-19th century (when the term ‘capitalism’ entered the lexicon) to the aftermath of the 2008 crash.
-- The Nation


Takes us on a 200-page tour of capitalism’s critics, from the well-worn fields of Marx, Mill and Keynes through the wilder thickets of critical theory.
-- The Spectator


An intellectual achievement…Foretelling the End of Capitalism will be an excellent reference point for debating the future of capitalism and human history.
-- Hans G. Despain Marx & Philosophy Review of Books


This beautifully written book captures the peculiar complicity between hope and disappointment that characterizes prophecies about the end of capitalism over the last three centuries. It will be of great interest to readers, both as a cautionary tale about prophecy and as a model study of the logic of capitalism itself.
-- Arjun Appadurai, New York University


Francesco Boldizzoni shows how predicting the collapse of capitalism is as old as capitalism itself. He illuminates a tradition of economic thinking that has justified do-nothing posturing in the name of revolution, and how it resists learning lessons of its own failures. This book is also a brilliant study of the cult of forecasting.
-- Jeremy Adelman, Princeton University


Foretelling the End of Capitalism is an essential book for anyone interested in intellectual history and political economy. It will play a major role in current debates on capitalism and its future, as well as on crisis and crisis theory.
-- Wolfgang Streeck, author of How Will Capitalism End?


Boldly written and brimming with new insights on every page, this is not your grandfather’s old and staid intellectual history. Boldizzoni takes us through a fast-paced history of capitalism’s failed doomsayers—only to then explain why they clearly underestimated its elongated life expectancy and stubborn durability. A superb intellectual history of how people have (wrongly) predicted and imagined the end of capitalism from the time of Marx until today.
-- Eli Cook, author of The Pricing of Progress