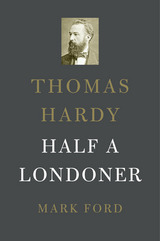 Because Thomas Hardy is so closely associated with the rural Wessex of his novels, stories, and poems, it is easy to forget that he was, in his own words, half a Londoner. Focusing on the formative five years in his early twenties when Hardy lived in the city, but also on his subsequent movement back and forth between Dorset and the capital, Mark Ford shows that the Dorset-London axis is critical to an understanding of his identity as a man and his achievement as a writer.

Thomas Hardy: Half a Londoner presents a detailed account of Hardy’s London experiences, from his arrival as a shy, impressionable youth, to his embrace of radical views, to his lionization by upper-class hostesses eager to fête the creator of Tess. Drawing on Hardy’s poems, letters, fiction, and autobiography, it offers a subtle, moving exploration of the author’s complex relationship with the metropolis and those he met or observed there: publishers, fellow authors, street-walkers, benighted lovers, and the aristocratic women who adored his writing but spurned his romantic advances.

The young Hardy’s oscillations between the routines and concerns of Dorset’s Higher Bockhampton and the excitements and dangers of London were crucial to his profound sense of being torn between mutually dependent but often mutually uncomprehending worlds. This fundamental self-division, Ford argues, can be traced not only in the poetry and fiction explicitly set in London but in novels as regionally circumscribed as Far from the Madding Crowd and Tess of the d’Urbervilles.

REVIEWS
Thomas Hardy: Half a Londoner offers fresh and exciting analysis of Hardy’s novels and poems, when they are viewed from the perspective of Hardy’s London experiences.
-- Simon Gatrell, University of Georgia


Mark Ford discusses Hardy with great urbanity and tact, and demonstrates throughout the literary insight of someone who is himself a distinguished poet. Hardy’s many admirers will find a great deal to relish in this astute, original, and highly enjoyable book.
-- Seamus Perry, University of Oxford


‘Wanted: Good Hardy Critic,’ jested Philip Larkin. Mark Ford fits the bill. Like his subject Thomas Hardy, Ford is an eminent poet and a knowledgeable Londoner. There is much for the lover and student of Hardy to learn, about an area of his life which has not, until now, received the attention it deserves.
-- John Sutherland, University College London


Excellent…Ford is a sensitive biographer who recognizes Hardy’s repression and his fervor—his embrace of London’s feverish energy alongside his horror of it. More than anything, though, Ford reveals the quality of Hardy’s London writing: the 1860s poetry (published years later) and the early novels.
-- Ralph Pite Evening Standard


A well-written account of Hardy’s London experiences and insightful consideration of their transformation into art.
-- Library Journal


As both a poet and novelist, Hardy is always associated not only with English gloom but also with the English countryside in which he was born. It was in London, however, that he became a writer, and Ford shows just how significant a role the capital played in both Hardy’s life and imagination…Ford’s discussion of [his] urban verses, particularly in a chapter on ‘London's Streets and Interiors,’ is both engrossing and illuminating…Ford provides equally valuable insights into the London of Hardy's fiction…Ford has the true measure of his subject, and his admiration for Hardy does not blind him to occasional dud moments and absurdities, which he treats with a light and witty touch. His discussion of less well-known novels and poems is particularly welcome, and this fine book will encourage readers to return to the work they know with a quickened perception and explore further what is new to them.
-- Peter Parker The Spectator


As Thomas Hardy: Half a Londoner shows in penetrating detail, there was another side to Hardy that grew out of his time in London, far away from the fields of Higher Bockhampton or the rows of his ancestors in Stinsford’s village churchyard, colored his mental landscape and had a profound effect on his work.
-- D. J. Taylor Wall Street Journal


Ford argues convincingly here that the Hardy industry in Dorset has obscured the importance of London to both his work and his life. Ford mingles literary criticism, biography and psychogeography to give a portrait both of Hardy’s London and of London’s Hardy. His passages on the novels and poems are dazzling and insightful.
-- Lara Feigel Daily Telegraph


Mark Ford’s absorbing new [book] argues that our wish to see Hardy as a man of Dorset has distracted us from his formative life as a Londoner…Ford, who is both an academic and a distinguished poet, gives full weight to the innovative qualities of thought and language that connect Hardy’s poetry and fiction. What makes his book remarkable is its compelling analysis of Hardy’s sustained difficulty in selling images of the pastoral to urban readers who were wistfully eager for its deep continuities, while reflecting the far-reaching transformations he had experienced in his years as a 'literary man about town.' It was a tension he was never able to resolve, but it was what gave his writing its enduringly uneasy substance.
-- Dinah Birch The Guardian


In this excellent study Ford provides a valuable perspective on the allure of London for Thomas Hardy…Ford’s superb study renders a fresh view of Hardy's ‘divided loyalties’ and complex character.
-- S. A. Parker Choice


I find Hardy’s character and sensibility very appealing, and this book was full of subtle insights into both.
-- Gwendoline Riley The Observer


Illuminating…Ford’s style is at once academic and accessible, erudite and elegant, and he constructs a compelling narrative that traces Hardy from his first sojourn in London as a young man (where he had gone to pursue his architecture ambitions but where he effectively ‘became a writer’) through the extended periods that he spent in the capital in later life.
-- Alex Ramon PopMatters


[A] notable book…Ford justly terms his book ‘the first comprehensive account of Hardy as a “London man,”’ and his claim is richly documented by the variety of ways, in life and letters, where the great city matched the country in enabling the writer’s astonishing career…What is most valuable about Ford's study is the number of poems he selects to illustrate the London narrative.
-- William H. Pritchard Weekly Standard


Probing and original…Ford has an intuitive feel for how best to use his knowledge of the life to shape his insights about the works.
-- Keith Wilson Hardy Review


Ford realigns our sense of Hardy, moving him from Wessex fields to London streets, and offering a transformed writer: less the time-torn pastoral tragedian than a painter of modern life…The biographical contours are familiar, but Ford makes them vibrate in interesting ways…One of the many virtues of Ford’s account is that it slows down the tempo of [the] early, difficult years, and draws our attention to uncanonical or even disdained writings that most criticism, in pursuit of Wessex and success, skips over. Ford provides sparkling readings of dour early poems, and calm analyses of fantastical potboilers…Ford brings out a modern impressionist, who brilliantly sketched urban interiors and exteriors; this writer is more concise, more direct, more imagistic than the writer we know from the Wessex fiction.
-- James Wood London Review of Books


It is rare that a book of literary biography and criticism opens so many divergent paths for new readings, but this is one of those books. What Mark Ford has taught me to look for is how both the idea of London and the actual London whose streets Hardy walked accentuated and solidified his thoughts on work, vocation, love, fame, and the fatefulness of temperament. To my enormous pleasure, Ford spends as much time reading Hardy’s works as he does tracing his steps and cast of mind…Ford’s learning and insight unfold in prose that is expressive as well as analytic.
-- Alexandra Mullen Hudson Review