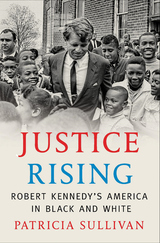 “A profound and uplifting account of Robert F. Kennedy’s brave crusade for racial equality. This is narrative history at its absolute finest, with RFK squarely at the center of the 1960s civil rights movement along with Martin Luther King Jr., James Baldwin, César Chávez, and other fearless activists. Bare-knuckled, with a golden heart, RFK was a visionary force to reckon with. This towering biographical portrait will stand the test of time.”
—Douglas Brinkley, author of Rosa Parks

A leading civil rights historian places Robert Kennedy for the first time at the center of the movement for racial justice of the 1960s—and shows how many of today’s issues can be traced back to that pivotal time.

History, race, and politics converged in the 1960s in ways that indelibly changed America. In Justice Rising, a landmark reconsideration of Robert Kennedy’s life and legacy, Patricia Sullivan draws on government files, personal papers, and oral interviews to reveal how he grasped the moment to emerge as a transformational leader.

When protests broke out across the South, the young attorney general confronted escalating demands for racial justice. What began as a political problem soon became a moral one. In the face of vehement pushback from Southern Democrats bent on massive resistance, he put the weight of the federal government behind school desegregation and voter registration. Bobby Kennedy’s youthful energy, moral vision, and capacity to lead created a momentum for change. He helped shape the 1964 Civil Rights Act but knew no law would end racism. When the Watts uprising brought calls for more aggressive policing, he pushed back, pointing to the root causes of urban unrest: entrenched poverty, substandard schools, and few job opportunities. RFK strongly opposed the military buildup in Vietnam, but nothing was more important to him than “the revolution within our gates, the struggle of the American Negro for full equality and full freedom.”

On the night of Martin Luther King’s assassination, Kennedy’s anguished appeal captured the hopes of a turbulent decade: “In this difficult time for the United States it is perhaps well to ask what kind of nation we are and what direction we want to move in.” It is a question that remains urgent and unanswered.

REVIEWS
Justice Rising is a profound and uplifting account of Robert F. Kennedy’s brave crusade for racial equality. This is narrative history at its absolute finest, with RFK squarely at the center of the 1960s civil rights movement along with Martin Luther King Jr., James Baldwin, César Chávez, and other fearless activists. Bare-knuckled, with a golden heart, RFK was a visionary force to reckon with. This towering biographical portrait will stand the test of time. Highly recommended!
-- Douglas Brinkley, author of Rosa Parks


In most accounts of the tumultuous 1960s, Robert Kennedy plays a supporting role…Sullivan corrects this and puts [him] near the center of the nation’s struggle for racial justice. She offers a moving and enlightening account of a life of public service marked by ambition and marred by serious errors in judgment, but more than redeemed by a sincere, powerful and enduring commitment to social justice…Kennedy’s personal growth and his political triumphs are reminders of the transformative potential of American democracy.
-- Richard Thompson Ford Washington Post


Sullivan’s brilliant and beautifully written biography of Robert Kennedy could hardly be more timely. Focusing on Kennedy's engagement with the African-American freedom struggle, it arrives in the wake of Black Lives Matter protests that demanded renewed public attention to institutional racism in the US and elsewhere. A privileged white man who came to embrace the cause of racial justice as his own, Kennedy offers a model of how to be an anti-racist ally.
-- Daniel Geary Irish Times


Provides a sobering analysis of the forces arrayed against advocates of racial justice. Desegregation suits took years to move through the courts. Ballot access was controlled by local officials…Most important, perhaps, Justice Rising reminds us that although he was assassinated over 50 years ago, Kennedy remains relevant in 2021.
-- Glenn C. Altschuler Florida Courier


Groundbreaking…Revelatory…Sullivan proves a gifted storyteller who creates a sense of suspense as she unfolds this tumultuous history that continues to inform our present.
-- Robin Lindley History News Network


[A] compelling story compellingly told…There are several biographies of Robert Kennedy by journalists, scholars, and former aides. Sullivan’s work is different because, as the subtitle indicates, its focus is on Kennedy’s concern for the freedom and equality of Black Americans.
-- Robert C. Smith American Political Thought


A fine-grained, compelling study of Kennedy evolving as a leader through his engagement with the deeply intertwined issues of civil rights, the urban crisis, and poverty.
-- Tom McCarthy S-USIH: Society for U.S. Intellectual History


A distillation of the motivations and importance of Robert F. Kennedy’s life and legacy…Effectively shows why Kennedy, who cared deeply about the plights of his fellow citizens, was beloved by millions…A sharp portrayal of the potential of the 1960s through the lens of RFK.
-- Kirkus Reviews (starred review)


[Sullivan] proposes that although Kennedy’s time in the political arena was short, his legacy as an advocate for the underserved continues to resonate…This is the best work to date on Kennedy’s civil rights record; it is a must for all historians of the 1960s, and for activists working for a more just society.
-- Library Journal (starred review)


A nuanced and deeply researched portrait of Robert Kennedy’s engagement with the civil rights movement as attorney general, U.S. senator, and presidential candidate…Sullivan makes a persuasive case that Kennedy played a crucial role in persuading white Americans to recognize the ill effects of racial discrimination. The result is an immersive and eye-opening history.
-- Publishers Weekly


If liberals are serious about exploiting emerging cracks in 21st century autocracy—in Putin’s Russia, Narendra Modi’s India, a United States still reeling from Donald Trump’s presidency, and elsewhere—then we would do well to study the all-too-brief career of this American leader. Kennedy’s life was dedicated to egalitarian empowerment, the very opposite of what keeps today’s autocrats in power.
-- Dinyar Patel The Print


This is a groundbreaking book that reorients our understanding of a surprisingly underexplored aspect of Robert Kennedy’s life and career—race and civil rights—and sheds new light on race relations during a pivotal era of American history. Some readers, especially in our current racial moment, may be skeptical of Kennedy’s importance, but Patricia Sullivan delivers a nuanced and informative portrait of Kennedy as one of the central players in the evolving drama of ’60s-era race relations. He remains an iconic figure, with his assassination shortly after that of Rev. Martin Luther King Jr. forever freezing his public image as a symbol of the unrealized potential of late-1960s politics.
-- Kenneth Mack, author of Representing the Race


Profoundly researched, vividly written, Justice Rising is a monumental reconsideration of RFK's bold vision and creative strategies in the bitter climate of white supremacy. As the struggle continues, this is the book we ALL need now!
-- Blanche Wiesen Cook, author of Eleanor Roosevelt


This magisterial history of how the social movements of the 1960s turned Robert Kennedy into a crusader for racial justice and great progressive president-in-the-making is timely. Patricia Sullivan has written the definitive book on the courageous and visionary leadership of the complex and ever-growing Robert Kennedy.
-- Cornel West


Patricia Sullivan’s magnificent book brings Robert Kennedy’s grace, moral leadership, and wisdom to a new generation of Americans who seek solutions to the same challenges that he so boldly confronted. Few American politicians have displayed such profound moral vision or such a stunning capacity to inspire others to take on the deep challenges facing the nation. His assassination cut short his quest for national healing, and our vast inequalities and racial divisions persist to this day. Justice Rising is an important book at an important moment in America.
-- Jeffrey Sachs, author of The End of Poverty


Justice Rising is a brilliant exploration of Robert Kennedy’s deep immersion in the civil rights–Black Power movement. The interactions between RFK’s public life and the wide-ranging racial reckoning of the 1960s come alive in new and compelling ways in this engrossing narrative. Equally impressive, this insightful work deepens our understanding of the intertwined political and racial worlds of the 1960s. It is a stunning achievement.
-- Waldo Martin, coauthor of Black against Empire

TABLE OF CONTENTS
Cover
Title Page
Copyright
Dedication
Contents
Preface: “The Best a White America Has to Offer”
1 · Misfit
2 · Along the Color Line: The 1950s
3 · Faith, Hope, and Politics
4 · Black Votes
5 · Simple Justice
6 · The Challenge of a Decade
Photographs 1
7 · Freedom Now
8 · “A Great Change Is at Hand”
9 · On His Own
10 · Transitions
11 · Beyond Civil Rights
12 · Suppose God Is Black
Photographs 2
13 · Reckoning
14 · The Gravest Crisis since the Civil War
15 · Our Country’s Future
16 · A Time of Danger and Questioning
17 · The Last of the Great Believables
Epilogue
Notes
Acknowledgments
Index