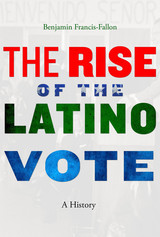 A new history reveals how the rise of the Latino vote has redrawn the political map and what it portends for the future of American politics.

The impact of the Latino vote is a constant subject of debate among pundits and scholars. Will it sway elections? And how will the political parties respond to the growing number of voters who identify as Latino? A more basic and revealing question, though, is how the Latino vote was forged—how U.S. voters with roots in Latin America came to be understood as a bloc with shared interests. In The Rise of the Latino Vote, Benjamin Francis-Fallon shows how this diverse group of voters devised a common political identity and how the rise of the Latino voter has transformed the electoral landscape.

Latino political power is a recent phenomenon. It emerged on the national scene during the turbulence of the 1960s and 1970s, when Mexican American, Puerto Rican, and Cuban American activists, alongside leaders in both the Democratic and the Republican parties, began to conceive and popularize a pan-ethnic Hispanic identity. Despite the increasing political potential of a unified Latino vote, many individual voters continued to affiliate more with their particular ethnic communities than with a broader Latino constituency. The search to resolve this contradiction continues to animate efforts to mobilize Hispanic voters and define their influence on the American political system.

The “Spanish-speaking vote” was constructed through deliberate action; it was not simply demographic growth that led the government to recognize Hispanics as a national minority group, ushering in a new era of multicultural politics. As we ponder how a new generation of Latino voters will shape America’s future, Francis-Fallon uncovers the historical forces behind the changing face of America.

REVIEWS
Shows how Latinx voters helped change not only the Democratic and Republican parties but also the egalitarian and internationalist politics of the American left…Francis-Fallon’s story of how Latinx voters and organizers helped shape a nationwide agenda is also telling for the present moment.
-- Ed Morales The Nation


[Has] a narrative brilliance that keeps the reader engaged through twists and turns by political leaders in South Texas, East Los Angeles, and East Harlem…Should be required reading for students of Mexican American history, state and national politicians, and anyone interested in understanding the significant role that Latinos have played, and continue to play, in Texas and national politics.
-- Felipe Hinojosa Southwestern Historical Quarterly


Francis-Fallon’s history of Latinx political power examines the elusive idea of a unified vote, while detailing how activists, laborers, and officeholders have nevertheless influenced American politics for decades.
-- Commonweal


Timely, well-researched, and important, The Rise of the Latino Vote is the best book yet on the history of Latino politics.
-- Geraldo Cadava, author of Standing on Common Ground


The Rise of the Latino Vote presents a powerful and expansive narrative about the creation of Latino politics at the national level, a process that was piecemeal and always contested. Francis-Fallon has written an enormously impressive book that fills a yawning hole in historical scholarship on Latino politics.
-- Lorrin Thomas, author of Puerto Rican Citizen


Deeply researched and powerfully written, The Rise of the Latino Vote for the first time connects the first rumblings of Viva Kennedy in the Southwest to the organizing of Puerto Ricans in New York City and then to the Cuban-led Reagan Revolution, explaining as never before how America’s now largest, most diverse minority group came to be—and the influence it will continue to wield in the future. This masterful dive into the thorny history of Latino politics will be required reading for years to come.
-- Max Krochmal, author of Blue Texas

TABLE OF CONTENTS
Cover
Title Page
Copyright
Dedication
Contents
Introduction
1. The Many Political Communities of Latino America
2. Viva Kennedy and the Nationalization of “Latin American” Politics
3. Civil Rights and the Recognition of a “National Minority"
4. Becoming Spanish-Speaking, Becoming Spanish Origin
5. Mastering the “Spanish-Speaking Concept"
6. Liberal Democrats and the Meanings of “Unidos"
7. The “Brown Mafia” and Middle-Class Spanish-Speaking Politics in 1972
8. The “Impossible Dream” of the Hispanic Republican Movement
9. Securing Representation in a Multicultural Democracy
10. Latino Liberalism in an Era of Limits
11. The “New Hispanic Conservatives"
Epilogue
Notes
Acknowledgments
Index