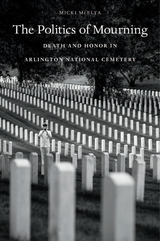 Arlington National Cemetery is one of America’s most sacred shrines, a destination for millions who tour its grounds to honor the men and women of the armed forces who serve and sacrifice. It commemorates their heroism, yet it has always been a place of struggle over the meaning of honor and love of country. Once a showcase plantation, Arlington was transformed by the Civil War, first into a settlement for the once enslaved, and then into a memorial for Union dead. Later wars broadened its significance, as did the creation of its iconic monument to universal military sacrifice: the Tomb of the Unknown Soldier.

As Arlington took its place at the center of the American story, inclusion within its gates became a prerequisite for claims to national belonging. This deeply moving book reminds us that many brave patriots who fought for America abroad struggled to be recognized at home, and that remembering the past and reckoning with it do not always go hand in hand.

“Perhaps it is cliché to observe that in the cities of the dead we find meaning for the living. But, as McElya has so gracefully shown, such a cliché is certainly fitting of Arlington.”
—American Historical Review

“A wonderful history of Arlington National Cemetery, detailing the political and emotional background to this high-profile burial ground.”
—Choice

REVIEWS
Perhaps it is cliché to observe that in the cities of the dead we find meaning for the living. But, as McElya has so gracefully shown, such a cliché is certainly fitting of Arlington.
-- American Historical Review


An insightful and affecting investigation of how Americans see themselves, and how they memorialize their soldiers, that will be of interest to historians and, particularly, veterans.
-- Edwin Burgess Library Journal (starred review)


McElya has crafted a wonderful history of Arlington National Cemetery, detailing the political and emotional background to this high profile burial ground. The evolution over the years of policies that govern who gets buried at Arlington, regardless of race or gender, is a complicated tale that deserves telling. The construction in 1921 of the Tomb of the Unknown Soldier serves as a powerful symbol of the universality of military service in support of democratic ideals. McElya's finely wrought prose brings this story to light.
-- E. A. Goedeken Choice


Highlighting issues of race, gender, sexuality, and nationhood, McElya not only corrects the dominant story of military valor but recuperates the lost landscape and lives of Arlington.
-- Kirk Savage, University of Pittsburgh


The Politics of Mourning is an elegantly written and fascinating study of the history of Arlington National Cemetery. McElya delves deeply into the complex story of Arlington’s evolution from antebellum plantation to hallowed ground and explores how this complicated past continues to shape its current status as ‘Our Nation’s Most Sacred Shrine.’
-- Suzanne E. Smith, George Mason University