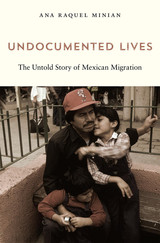 “Necessary and timely…A valuable text to consider alongside the current fight for DACA, the border concentration camps, and the unending rhetoric dehumanizing Mexican migrants.”
—PopMatters

“A deep dive into the history of Mexican migration to and from the United States.”
—PRI’s The World

In the 1970s, the Mexican government decided to tackle rural unemployment by supporting the migration of able-bodied men. Millions of Mexican men crossed into the United States to find work. They took low-level positions that few Americans wanted and sent money back to communities that depended on their support. They periodically returned to Mexico, living their lives in both countries. After 1986, however, US authorities disrupted this back-and-forth movement by strengthening border controls. Many Mexican men chose to remain in the United States permanently for fear of not being able to come back north if they returned to Mexico. For them, the United States became a jaula de oro—a cage of gold. Undocumented Lives tells the story of Mexican migrants who were compelled to bring their families across the border and raise a generation of undocumented children.

REVIEWS
Undocumented Lives is a deep dive into the history of Mexican migration to and from the United States and how, many times, migrants can feel ni aquí, ni allá, neither here, nor there—not fully recognized by any one place.
-- Monica Campbell PRI’s The World


Minian’s aching and timely book clearly lays out the political and cultural forces on both sides of the border that have placed millions of Mexicans in the golden cage that is the U.S.’ immigration policy…Minian has conducted exhaustive research, which includes copious oral-history interviews, to produce a work providing historical context and perspective for the current debate raging about immigration.
-- Sara Martinez Booklist


Minian traces today’s unauthorized migration to the years between 1965 and 1986, when the disruption of Mexican circular migration trapped unauthorized migrants on US soil. The book explores Mexican and US policies as well as media resources and intimate testimonials to show how migrants thought about home and how they were treated, as well as discussing their financial limitations, child-rearing challenges, and relationships with romantic partners and family.
-- Ana Hontanilla Latin American Research Review


Minian provides an elaborate account of Mexican immigration to the United States, particularly from the mid-1960s to the 1980s…This history provides a rare window into ‘the messy complexity of [the] lived experience’ of Mexican migrants and contributes much-needed nuance to contemporary debates on immigration.
-- Publishers Weekly


Undocumented Lives explores the double exclusion of Mexican men from their respective homes of national belonging—Mexico, by making it impossible for families to subsist without husbands’ and fathers’ migration and remittance; the United States, by exploiting undocumented laborers while forcing them to live in the shadows lest they be deported. This is a deeply humane book that focuses on the lives of migrants who endure and navigate these exclusions.
-- Mae Ngai, Columbia University


A truly impressive accomplishment that combines political and economic analysis with personal narratives of love, loss, and belonging to offer a holistic, deeply humane look at Mexican migration in the late twentieth century. If you read only one book about the roots of immigration debates today, this should be it.
-- Geraldo Cadava, author of Standing on Common Ground


Well-written and gripping, this book rigorously and imaginatively shows us how changes in immigration policy on both sides of the border dramatically affect peoples’ lives. Based on an impressive number of oral histories conducted in both Mexico and the United States, Undocumented Lives is a valuable contribution to the history of both countries and a revelation of the experience of those who can claim neither as home.
-- Margaret Chowning, University of California, Berkeley


An important book that will have an immediate impact on the history and historiography of Mexican migration to the United States in the twentieth century and beyond.
-- David G. Gutiérrez, University of California, San Diego

TABLE OF CONTENTS
Cover
Title Page
Copyright
Dedication
Contents
Introduction: From Neither Here nor There
1. An Excess of Citizens
2. “A Population without a Country"
3. The Intimate World of Migrants
4. Normalizing Migration
5. Supporting the Hometown from Abroad
6. The Rights of the People
7. A Law to Curtail Undocumented Migration
8. The Cage of Gold
Afterword
Appendix A: Note on Sources
Appendix B: Queer Migration
Notes
Acknowledgments
Index