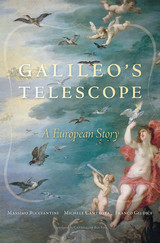 Between 1608 and 1610 the canopy of the night sky changed forever, ripped open by an object created almost by accident: a cylinder with lenses at both ends. Galileo’s Telescope tells the story of how an ingenious optical device evolved from a toy-like curiosity into a precision scientific instrument, all in a few years. In transcending the limits of human vision, the telescope transformed humanity’s view of itself and knowledge of the cosmos.

Galileo plays a leading—but by no means solo—part in this riveting tale. He shares the stage with mathematicians, astronomers, and theologians from Paolo Sarpi to Johannes Kepler and Cardinal Bellarmine, sovereigns such as Rudolph II and James I, as well as craftsmen, courtiers, poets, and painters. Starting in the Netherlands, where a spectacle-maker created a spyglass with the modest magnifying power of three, the telescope spread like technological wildfire to Venice, Rome, Prague, Paris, London, and ultimately India and China. Galileo’s celestial discoveries—hundreds of stars previously invisible to the naked eye, lunar mountains, and moons orbiting Jupiter—were announced to the world in his revolutionary treatise Sidereus Nuncius.

Combining science, politics, religion, and the arts, Galileo’s Telescope rewrites the early history of a world-shattering innovation whose visual power ultimately came to embody meanings far beyond the science of the stars.

REVIEWS
Makes available to the general reader one of the most fascinating stories in the history of science.
-- Mark Archer Wall Street Journal


A rich and complex story of how the Galilean telescope emerged from the Dutch spyglass. In Galileo’s Telescope, Massimo Bucciantini, Michele Camerota, and Franco Giudice—three distinguished historians of science who have written extensively on Galileo—retell this famous story in light of considerable new evidence and their own firm grasp of the twists and turns of [its] history. Fundamentally, they remind us that we need to stop looking only at Galileo… Surveying the entire European landscape in the years immediately before and after Galileo’s announcement, this book offers a comprehensive vision of how an entire world, rather than a single if singular individual, gave birth to the telescope.
-- Paula Findlen Los Angeles Review of Books


[A] hugely enjoyable book, by far the most lively and challenging book on Galileo to appear in decades…Everyone who’s ever looked up at the night sky and wondered should read it and re-make the acquaintance of the man who showed us all what we were really looking at.
-- Steve Donoghue Open Letters Monthly


Galileo’s Telescope opens the door to a whole society going through deep transformation…The book will be satisfying to anyone wanting a wider cultural perspective on this most unsettling time.
-- Brian Welter Catholic News Service


Project[s] a sense of how new ways of seeing, far from merely providing new tools, were—and are—complicated extensions of the way we understand our experience.
-- Philip Ball Nature


Galileo’s Telescope is a new account of this turning point in the history of western civilization, and its authors—three Italian history of science professors—give equal weight to the telescope’s scientific, cultural and political impacts. Translated into lucid English by Catherine Bolton, the book is full of entertaining insights and asides… Modern anxieties tend to focus on what science enables us to do, but Galileo’s Telescope reminds us that the truly subversive potential of science lies in what it enables us to imagine.
-- Marek Kukula The Spectator


Using letters, paintings and other contemporary documents, Massimo Bucciantini, Michele Camerata and Franco Giudice show, in meticulous detail, that the dissemination of Galileo’s discoveries was by no means linear and straightforward.
-- Robyn Arianrhod Times Higher Education


In broad outline, the story of Galileo and the first use of a telescope in astronomy is well known. Bucciantini, Camerota, and Giudice take a new look at this seminal event by focusing on how the news spread across Europe and how it was received. Their well-written narrative examines the central issues using papers, paintings, letters, and other contemporary documents… After four centuries [Galileo’s] reputation has been thoroughly vindicated.
-- D. E. Hogg Choice


Over six decades I have read many biographies of Galileo and his discoveries, but never have I encountered a more exciting presentation. Reading about the prompt pushback against Galileo in Florence itself was an eye-opener, to mention a special climax to this brilliantly researched and illustrated account.
-- Owen Gingerich, Harvard-Smithsonian Center for Astrophysics

TABLE OF CONTENTS
Contents
List of Illustrations, Plates, and Maps
Prologue
1. From the Low Countries
2. The Venetian Archipelago
3. Breaking News: Glass and Envelopes
4. In a Flash
5. Peregrinations
6. The Battle of Prague
7. Across the English Channel: Poets, Philosophers, and Astronomers
8. Conquering France
9. Milan: At the Court of “King” Federico
10. The Dark Skies of Florence
11. The Roman Mission
12. In Motion: Portugal, India, China
Epilogue
Notes
References
Credits
Acknowledgments
Index