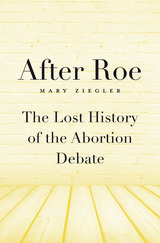 Forty years after the U.S. Supreme Court handed down its decision legalizing abortion, Roe v. Wade continues to make headlines. After Roe: The Lost History of the Abortion Debate cuts through the myths and misunderstandings to present a clear-eyed account of cultural and political responses to the landmark 1973 ruling in the decade that followed. The grassroots activists who shaped the discussion after Roe, Mary Ziegler shows, were far more fluid and diverse than the partisans dominating the debate today.

In the early years after the decision, advocates on either side of the abortion battle sought common ground on issues from pregnancy discrimination to fetal research. Drawing on archives and more than 100 interviews with key participants, Ziegler’s revelations complicate the view that abortion rights proponents were insensitive to larger questions of racial and class injustice, and expose as caricature the idea that abortion opponents were inherently antifeminist. But over time, “pro-abortion” and “anti-abortion” positions hardened into “pro-choice” and “pro-life” categories in response to political pressures and compromises. This increasingly contentious back-and-forth produced the interpretation now taken for granted—that Roe was primarily a ruling on a woman’s right to choose.

Peering beneath the surface of social-movement struggles in the 1970s, After Roe reveals how actors on the left and the right have today made Roe a symbol for a spectrum of fervently held political beliefs.

REVIEWS
Resurrects the strange ancestry of the pro-life and pro-choice camps, which, in reality, are anything but.
-- The Economist


This fair-minded yet hard-hitting book charts the descent of abortion politics into partisanship and rancor.
-- Joshua Prager New York Times


Ziegler shows the contingencies, shifts, and cross-cutting arguments in the strategies of both sides.
-- Linda Gordon Dissent


In this landmark study, a law professor peers into our post-Roe future by retracing the contours surrounding the Supreme Court case: The boundaries were fluid, and activists on both sides sought common ground in medical research and pregnancy discrimination. How did the good-faith sparring harden into trench warfare? Ziegler’s results may surprise. Pro-choice leaders often ignored specific questions regarding race and socioeconomic class, while anti-choice soldiers were not by definition antifeminist. The eventual binary—does a woman have a Constitutional right to an abortion, yay or nay?—sparked a zero-sum game that will leave political scars for decades.
-- Oprah Daily


The central thesis of Ziegler’s new book is that, however important the decision itself, the continuing struggles over abortion policies were largely shaped by politicians and social movements after the Supreme Court decided Roe v. Wade in 1973…Some observers contend that the court ended what could have been a productive public debate, but Ziegler argues that the decision actually energized the opposing sides, leading them to adopt new strategies and rhetoric. By showing readers how organized reactions to this key decision shaped the politics of abortion, her study may help readers understand what will ensue following the Supreme Court’s recent decision regarding same-sex marriage.
-- M. E. Ethridge Choice


An original and compelling history that complicates our understanding of abortion politics in important ways. Ziegler has written a real insiders’ account—rich and textured—that comprehensively traces the history of social movements’ response to Roe v. Wade, explaining how they developed, navigated internal tensions and external pressures, and made strategic and ideological choices and compromises. She demonstrates that the pro-life/pro-choice split was never inevitable; instead, it emerged in response to a variety of contingencies, including changing political conditions.
-- Sara Dubow, author of Ourselves Unborn: Fetal Meanings in Modern America


Ziegler’s compelling book challenges conventional wisdom about Roe v. Wade’s short- and long-term consequences for social movements and the law. Using a wide range of sources, she shows how fluid the abortion debate remained in the decade following Roe, and details how activists on both sides responded in complicated ways to the decision and to other political constraints and opportunities in the 1970s and early 1980s. After Roe makes important and original contributions to constitutional law and legal history, and to the study of women, gender, and sexuality.
-- Serena Mayeri, author of Reasoning from Race: Feminism, Law, and the Civil Rights Revolution