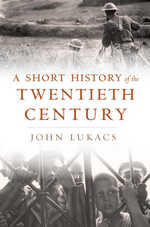 The historian John Lukacs offers a concise history of the twentieth century--its two world wars and cold war, its nations and leaders. The great themes woven through this spirited narrative are inseparable from the author's own intellectual preoccupations: the fading of liberalism, the rise of populism and nationalism, the achievements and dangers of technology, and the continuing democratization of the globe.

The historical twentieth century began with the First World War in 1914 and ended seventy-five years later with the collapse of the Soviet Empire in 1989. The short century saw the end of European dominance and the rise of American power and influence throughout the world. The twentieth century was an American century--perhaps the American century. Lukacs explores in detail the phenomenon of national socialism (national socialist parties, he reminds us, have outlived the century), Hitler's sole responsibility for the Second World War, and the crucial roles played by his determined opponents Churchill and Roosevelt. Between 1939 and 1942 Germany came closer to winning than many people suppose.

Lukacs casts a hard eye at the consequences of the Second World War--the often misunderstood Soviet-American cold war--and at the shifting social and political developments in the Far and Middle East and elsewhere. In an eloquent closing meditation on the passing of the twentieth century, he reflects on the advance of democracy throughout the world and the limitations of human knowledge.

REVIEWS
Compressed history as sharp and provocative as it is short...Lukacs begins with the start of World War I and closes with the belated end of the Cold War, consistently contending that the Soviet Union was overrated as a threat to the United States and American primacy. Some will take issue with how much this history focuses on Europe in general and the two world wars in particular...Yet the author has a solid point of view and requires readers to come to terms with it, whether they agree or not. Where other histories focus on larger economic, cultural and political forces, Lukacs stresses the crucial roles played by individuals...A masterpiece of concision and a marvel of clear, controlled prose.
-- Kirkus Reviews (starred review)


Lukacs delivers an insightful overview of the 'historical' 20th century, a span beginning in 1914 with WWI and ending in 1989 with the fall of the Berlin Wall.


This readable and thought-provoking book is one of the first short histories of the 20th century that is more than a list of dates and facts.


The 1920s, according to Lukacs, was the only true revolutionary decade of the last century--all that stuff we saw in the 1960s was merely ‘further exaggerations’ of Roaring Twenties trends. That’s the sort of arresting remark that makes the Hungarian-born American scholar one of the most idiosyncratic historians of his era…And he makes a thought-provoking case for the 20s as the fulcrum of modernity…There are many…swipes at conventional wisdom and prevailing assumptions in this engaging book…Most intriguing is Lukacs’s conclusion as to what might be the 20th century’s signal achievement. Advances in physics, tellingly accomplished in the revolutionary 1920s, demonstrated that observers are an inseparable part of what they observe. Humans have thus returned, metaphysically, to the center of the universe, something that will affect, unpredictably, our concept of ourselves for decades to come.
-- Brian Bethune Maclean’s


More an interpretation than a history. But what an interpretation! To Lukacs, communism and anti-communism were blips on the historical radar. Russia has always been a giant authoritarian despotism, as has China--whether the autocrats of these states call themselves ‘communist’ or not has little to do with overall conditions there. This insistence is the most refreshing aspect of the book--rather than viewing politics as a perpetual crisis, where the existence of life as we know it is threatened with each presidential campaign, Lukacs insists that nations will, generally speaking, continue to keep their fundamental character.
-- Caleb Nelson World Magazine


A cultural pessimist, an erudite historian and a humanist, Lukacs does not mince his words when he explores the follies of a century second to none in terms of mass delusions, violence and state-organized terror. Insightful, unorthodox and unpredictable, the book offers new perspectives on communism, fascism, liberal democracy and nationalism. His discussion of communism as rooted in fear is truly original.
-- Vladimir Tismaneanu Times Higher Education

TABLE OF CONTENTS
Contents
1. “God Writes Straight with Crooked Lines”
2. “Now We Have Only Peoples’ Wars”
3. “National Self-Determination”
4. “Cossacks! Brethren!”
5. No Nostalgia for the “World of Yesterday”
6. South of the Border and Across the Pacific
7. “Middle Class” Is Not “Bourgeois”
8. “I Was a Nationalist, but I Was Not a Patriot”
9. The Wave of the Future
10. “I Hope It Is Not Too Late”
11. To Subdue and Conquer Germany and Japan
12. The Division of Europe Almost Complete
13. The Brave Harry Truman
14. American Nationalism, American Benevolence
15. “Europe,” and the End of the Cold War
16. “Great Leap Forward”
17. The Limitations of Human Knowledge
Index