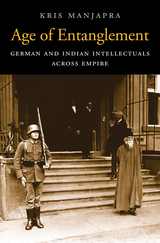 Age of Entanglement explores patterns of connection linking German and Indian intellectuals from the nineteenth century to the years after the Second World War. Kris Manjapra traces the intersecting ideas and careers of a diverse collection of individuals from South Asia and Central Europe who shared ideas, formed networks, and studied one another's worlds. Moving beyond well-rehearsed critiques of colonialism toward a new critical approach, this study recasts modern intellectual history in terms of the knotted intellectual itineraries of seeming strangers.

Collaborations in the sciences, arts, and humanities produced extraordinary meetings of German and Indian minds. Meghnad Saha met Albert Einstein, Stella Kramrisch brought the Bauhaus to Calcutta, and Girindrasekhar Bose began a correspondence with Sigmund Freud. Rabindranath Tagore traveled to Germany to recruit scholars for a new Indian university, and the actor Himanshu Rai hired director Franz Osten to help establish movie studios in Bombay. These interactions, Manjapra argues, evinced shared responses to the cultural and political hegemony of the British empire. Germans and Indians hoped to find in one another the tools needed to disrupt an Anglocentric world order.

As Manjapra demonstrates, transnational intellectual encounters are not inherently progressive. From Orientalism and Aryanism to socialism and scientism, German-Indian entanglements were neither necessarily liberal nor conventionally cosmopolitan, often characterized as much by manipulation as by cooperation. Age of Entanglement underscores the connections between German and Indian intellectual history, revealing the characteristics of a global age when the distance separating Europe and Asia seemed, temporarily, to disappear.

REVIEWS
A superb piece of global intellectual history that moves well beyond the boundaries of Europe and the British Empire. Manjapra shows that the imagination of German thinkers was never confined to Europe, and that Indian intellectuals were possessed of a global vision that transcended imperial boundaries. Age of Entanglement paves the way for a new kind of history of ideas.
-- Sunil Amrith, author of Crossing the Bay of Bengal: The Furies of Nature and the Fortunes of Migrants


A bold and fascinating work. Manjapra moves decidedly and elegantly beyond conventional frameworks by writing a truly global history of intellectual exchange between Germany and India. Age of Entanglement is an ambitious and convincing account of the ways in which both sides were linked to--and enabled and constrained by--the structures and politics of empire.
-- Sebastian Conrad, author of German Colonialism: A Short History


Age of Entanglement is a superb and enriching work of intellectual history, presenting larger contexts, perceptions and connections to the understanding of European Germany and colonial‐nationalist India.
-- B. Surendra Rao The Hindu


Manjapra very carefully and expertly opens a window into two past struggles against hegemony, in Germany and India, struggles that were geographically separated but intellectually attached…[An] excellent work…The book should strongly appeal to a wide range of academic and nonacademic readers, and may be of particular interest to those studying world history, geopolitics, post-colonialism and development.
-- Ankit Kumar LSE Review of Books


This magnificent history of intellectual exchange between India and Germany is valuable for many reasons. It redresses an odd imbalance in thinking about the influences that shaped Indian intellectual life and institutions in the early 20th century. As Manjapra demonstrates, German intellectual life was not only a major source of influence across almost all the disciplines in modern India; it also provided a different context for Indian and European dialogue outside the context of Empire…This deeply researched, well written, erudite book is rich in the kind of telling detail that far transcends the interest of the central argument…Its treatment of individual texts and thinkers is always pithy and precise; its eye for institutional detail sets it apart from conventional intellectual histories. It is an impressive achievement that once again reminds you of the complexities that go into the making of intellectual cultures. It is an important book in the rediscovery of the history of modern Indian intellectual life.
-- Pratap Bhanu Mehta Indian Express


Age of Entanglement is a brilliantly original story of the revolt of Indian and German intellectuals against the old world of the Pax Britannica. It is much more than a study of South Asian and European history. It is a landmark work in the emerging field of global intellectual history--a remarkable achievement.
-- David Motadel Literary Review