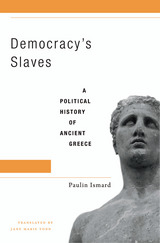 The ancient Greek statesman is a familiar figure in the Western political tradition. Less well known is the administrator who ran the state but who was himself a slave. Challenging the modern belief that democracy and bondage are incompatible, Paulin Ismard directs our attention to the cradle of Western democracy, ancient Athens, where the functioning of civic government depended crucially on highly skilled experts who were literally public servants—slaves owned by the city-state rather than by private citizens.

Known as dēmosioi, these public slaves filled a variety of important roles in Athenian society. They were court clerks, archivists, administrators, accountants, and policemen. Many possessed knowledge and skills beyond the attainments of average citizens, and they enjoyed privileges, such as the right to own property, that were denied to private slaves. In effect, dēmosioi were Western civilization’s first civil servants—though they carried out their duties in a condition of bound servitude.

Ismard detects a radical split between politics and administrative government at the heart of Athenian democracy. The city-state’s managerial caste freed citizens from the day-to-day responsibilities of running the state. By the same token, these public servants were unable to participate in the democratic process because they lacked the rights of full citizenship. By rendering the state’s administrators politically invisible, Athens warded off the specter of a government capable of turning against the citizens’ will. In a real sense, Ismard shows, Athenian citizens put the success of their democratic experiment in the hands of slaves.

REVIEWS
This ingenious work is as much a study of ancient Greek democracy as of its public slaves. In fine-grained interpretations of the ancient sources, informed by an impressive grasp of the comparative literature on slavery, Ismard unravels nearly all the puzzling aspects of the dēmosioi’s status and roles: policemen, priests, artisans, civil servants, archivist and expert advisers, yet fully slaves. In so doing, he further illuminates the paradox of the constitutive role of slavery in the Greek discovery and understanding of freedom, especially the centrality of participative citizenship and amateur political deliberation. Brilliantly original, and persuasively argued, it will be required reading for all students of Greek slavery and the Western origins of freedom.
-- Orlando Patterson, author of Freedom, Volume 1: Freedom in the Making of Western Culture


This is not a conventional work of ancient history, and so much the better. Ismard challenges our dependence on influential comparisons of ancient and modern democracies, ancient and modern slave societies. Democracy’s Slaves is forceful, engaging, erudite, and sophisticated.
-- Page duBois, University of California, San Diego


[An] elegant and discreetly knowledgable translation…Ismard’s book is welcome for both its careful factual survey of the too scanty evidence for the activities of the dēmosioi, and its comparison of their activities with those of similar administrators in other slave societies.
-- Peter Green London Review of Books


The Western claim of Greece and Rome as a cultural heritage has affected classical scholarship and contemporary vision, sometimes in mirror imaging, sometimes in moral rationalization. Slavery has been viewed almost exclusively through this filter, but this book is a fresh, revisionist appraisal of the institution…Ismard sets his argument in the origins of public slavery and carries it through all aspects of classical Greek society. His use of a variety of geo-­historical examples adds to the flavor if not the substance of the book. The author has clearly mastered the relevant classical texts and material sources, but it is his fresh perspective that makes this a fascinating, important scholarly work.
-- J. Tucci Choice