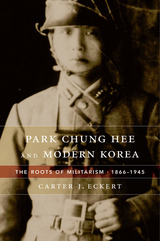 For South Koreans, the twenty years from the early 1960s to late 1970s were the best and worst of times—a period of unprecedented economic growth and of political oppression that deepened as prosperity spread. In this masterly account, Carter J. Eckert finds the roots of South Korea’s dramatic socioeconomic transformation in the country’s long history of militarization—a history personified in South Korea’s paramount leader, Park Chung Hee.

The first volume of a comprehensive two-part history, Park Chung Hee and Modern Korea: The Roots of Militarism, 1866–1945 reveals how the foundations of the dynamic but strongly authoritarian Korean state that emerged under Park were laid during the period of Japanese occupation. As a cadet in the Manchurian Military Academy, Park and his fellow officers absorbed the Imperial Japanese Army’s ethos of victory at all costs and absolute obedience to authority. Japanese military culture decisively shaped Korea’s postwar generation of military leaders. When Park seized power in an army coup in 1961, he brought this training and mentality to bear on the project of Korean modernization.

Korean society under Park exuded a distinctively martial character, Eckert shows. Its hallmarks included the belief that the army should intervene in politics in times of crisis; that a central authority should plan and monitor the country’s economic system; that the Korean people’s “can do” spirit would allow them to overcome any challenge; and that the state should maintain a strong disciplinary presence in society, reserving the right to use violence to maintain order.

REVIEWS
A milestone in the literature of modern East Asia. Through close and careful examination, Eckert shows that Korean military leaders, preeminently Park Chung Hee, learned how warfare and industrial development could go hand-in-hand in the hothouse of 1930s Manchuria. They later used that model in the South to accomplish one of the most rapid developmental surges in world history. This is an enormous contribution to our understanding of modern Korea and East Asia.
-- Bruce Cumings, author of Korea’s Place in the Sun: A Modern History


Prodigiously researched and fluently written, Eckert’s book throws fascinating light on how Imperial Japan’s harsh colonial rule in Korea and Manchuria bequeathed a legacy of both authoritarianism and economic transformation to South Korea. This is a truly original contribution to our understanding of Japan’s as well as Korea’s modern history.
-- John W. Dower, author of Embracing Defeat: Japan in the Wake of World War II


This is a profound and important work, the culmination of decades of research and thought by a leader in the field. Timely, deeply researched, and engagingly written, this book occupies a unique place in the scholarship on modern Korea, and addresses a topic whose impact extends well beyond Korean and East Asian history.
-- Charles K. Armstrong, author of Tyranny of the Weak: North Korea and the World, 1950-1992


Eckert, one of our most distinguished historians of Korea, comprehensively details the revealing background to how Park Chung Hee acquired the dedicated spirit to lead Korea’s modernization: spiritual training in Japanese military academies.
-- Ezra F. Vogel, author of Deng Xiaoping and the Transformation of China


A masterly treatment of the pre-1945 origins of militarism that would later become manifest in the programs, leadership style, development philosophy, and political tactics of the Park Chung Hee era. This crucial work will have an enormous impact on the debates surrounding a number of issues in the postwar history of Korea.
-- Michael E. Robinson, author of Korea's Twentieth-Century Odyssey: A Short History


This pathbreaking book contributes to both modern Korean history and Japanese colonial history by exploring the instruction that Park Chung-hee (who went on to lead South Korea from 1961 to 1979) and others of his generation received when they were officer trainees in the Japanese colonial army in the 1940s…The book is not a biography, but it uses Park’s early career as a window onto Japanese militarism, which shaped the ethos of the men who later guided the first decades of an independent South Korea.
-- Andrew J. Nathan Foreign Affairs


Eckert meticulously examines how Japan’s military occupation of Korea (1910–45) and Manchuria (1931–45) shaped the future contours of Korean politics and society to the detriment of individual rights and democracy…Eckert has delivered a robust analysis of the consequences of continuous conflict on the Korean peninsula and the resulting permeation of military values into various echelons of society. By interpreting the history of twentieth-century South Korea as a product of long-term geopolitical factors in both East Asia and the wider world, Park Chung Hee and Modern Korea represents a salient paradigmatic shift in the study of the region and thus richly deserves the highest plaudits from the scholarly community.
-- Jeff Roquen LSE Review of Books