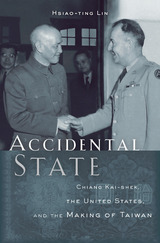 The existence of two Chinese states—one controlling mainland China, the other controlling the island of Taiwan—is often understood as a seemingly inevitable outcome of the Chinese civil war. Defeated by Mao Zedong, Chiang Kai-shek’s Nationalists fled to Taiwan to establish a rival state, thereby creating the “Two Chinas” dilemma that vexes international diplomacy to this day. Accidental State challenges this conventional narrative to offer a new perspective on the founding of modern Taiwan.

Hsiao-ting Lin marshals extensive research in recently declassified archives to show that the creation of a Taiwanese state in the early 1950s owed more to serendipity than careful geostrategic planning. It was the cumulative outcome of ad hoc half-measures and imperfect compromises, particularly when it came to the Nationalists’ often contentious relationship with the United States.

Taiwan’s political status was fraught from the start. The island had been formally ceded to Japan after the First Sino-Japanese War, and during World War II the Allies promised Chiang that Taiwan would revert to Chinese rule after Japan’s defeat. But as the Chinese civil war turned against the Nationalists, U.S. policymakers reassessed the wisdom of backing Chiang. The idea of placing Taiwan under United Nations trusteeship gained traction. Cold War realities, and the fear of Taiwan falling into Communist hands, led Washington to recalibrate U.S. policy. Yet American support of a Taiwan-based Republic of China remained ambivalent, and Taiwan had to eke out a place for itself in international affairs as a de facto, if not fully sovereign, state.

REVIEWS
A model of rigorous scholarship and revisionist argument. Using a wide variety of primary materials, Lin shows the early Cold War in Asia was a time of fast and unexpected change and that the establishment of a new polity on Taiwan came about in highly contingent circumstances. This is a powerful and exciting argument to our understanding of modern Cold War and Chinese history.
-- Rana Mitter, author of Forgotten Ally: China’s World War II, 1937–1945


This book provides an engaging account of the process by which Taiwan became the final redoubt of the ‘Republic of China’ following Chiang Kai-shek’s defeat in his civil war with the Communist Party of China. Under Lin’s skillful hands this seemingly straightforward story is revealed as a complicated Cold War tale of domestic and international intrigue, with consequences far beyond Taiwan’s emergence as an ‘accidental state.’
-- Edward A. McCord, author of Military Force and Elite Power in the Formation of Modern China


A pleasure to read…What Lin does in this fine book is examine the confused situation that existed from 1949 to 1954, leading up to the [Chinese Nationalist Party’s] realization that the game was up in China and the decision by the Americans to finally sign a formal treaty with Taipei.
-- Bradley Winterton Taipei Times