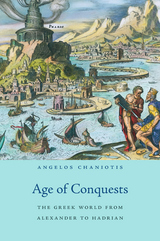 The world that Alexander remade in his lifetime was transformed once more by his death in 323 BCE. His successors reorganized Persian lands to create a new empire stretching from the eastern Mediterranean as far as present-day Afghanistan, while in Greece and Macedonia a fragile balance of power repeatedly dissolved into war. Then, from the late third century BCE to the end of the first, Rome’s military and diplomatic might successively dismantled these post-Alexandrian political structures, one by one.

During the Hellenistic period (c. 323–30 BCE), small polities struggled to retain the illusion of their identity and independence, in the face of violent antagonism among large states. With time, trade growth resumed and centers of intellectual and artistic achievement sprang up across a vast network, from Italy to Afghanistan and Russia to Ethiopia. But the death of Cleopatra in 30 BCE brought this Hellenistic moment to a close—or so the story goes.

In Angelos Chaniotis’s view, however, the Hellenistic world continued to Hadrian’s death in 138 CE. Not only did Hellenistic social structures survive the coming of Rome, Chaniotis shows, but social, economic, and cultural trends that were set in motion between the deaths of Alexander and Cleopatra intensified during this extended period. Age of Conquests provides a compelling narrative of the main events that shaped ancient civilization during five crucial centuries. Many of these developments—globalization, the rise of megacities, technological progress, religious diversity, and rational governance—have parallels in our world today.

REVIEWS
The oikoumene was the name the ancient Greeks gave to what they saw as the inhabited world. In Age of Conquests, Angelos Chaniotis tells the story of the Hellenistic oikoumene—its staggering cultural diversity, as well as the people, ideas, and events that unified it for centuries. Chaniotis boldly breaks with the traditional chronological divisions of ancient history and writes of the long Hellenistic era from the reign of Alexander to Hadrian. Anyone interested in the great cultural achievements of the ancient Greek world will profit greatly from this ambitious book by a leading historian.
-- Alain Bresson, author of The Making of the Ancient Greek Economy: Institutions, Markets, and Growth in the City-States


The period that begins with the conquests of Alexander the Great and ends with the reign of the Roman emperor Hadrian is one of the most important and tumultuous in world history. Jesus Christ, Cleopatra, Julius Caesar, and Nero are only a few of the figures who lived during this era. Greeks and Greek-speakers played a crucial role during these years and bear witness to a number of astonishing phenomena—the emergence of Christianity, the consolidation of the Roman Empire, the founding of the library in Alexandria, and lasting developments in philosophy, literature, political thought, and technology. Angelos Chaniotis brings the Hellenistic age to life with remarkable learning, mastery of evidence, and sensitivity. His book offers a brilliant picture of the cosmopolitan Greek world and shows why it still matters to us today.
-- Phiroze Vasunia, author of The Gift of the Nile: Hellenizing Egypt from Aeschylus to Alexander


A wide-ranging and lively history of the Greek East that offers a rare combination of erudition and accessibility.
-- Andrew Erskine, University of Edinburgh


Angelos Chaniotis conveys all the richness and excitement of an extraordinary era in human history in this new work. The period of Greek history after the death of Alexander is the story of the rise and fall of empires and kingdoms, of a new global Greek world stretching from Cyrenaica to Afghanistan, and of the struggle of the cities of the ‘old’ Greek world to maintain their position. But it is also a period of intense cultural and scientific creativity, in which rulers were widely worshiped as gods, and where for the first time our sources reveal details of the lives of everyday Greeks and foreigners. There is no one who knows the evidence for the long Hellenistic Age better than Angelos Chaniotis—and in Age of Conquests he brings this canvas to life.
-- Tom Harrison, University of St Andrews


Reminds us that the principal political unit of the Hellenistic world remained the poleis—the self-governing ‘city-state,’ which endured under the Roman Empire as a mainstay of imperial rule… A valuable read for anyone interested in Greek, Hellenistic, or Roman history.
-- NYMAS Review


This is the most original history of the Hellenistic period to appear since the publication of F. E. Peters’s The Harvest of Hellenism in 1971. Like Peters, Chaniotis argues for a long Hellenistic period in which trends set in motion by the conquests of Alexander the Great extended far beyond the traditional end point of the death of Cleopatra VII in 30 BCE, climaxing, in his view, during the reign of the Roman Emperor Hadrian in the second century CE. As the title indicates, the book focuses on political and military history… Particularly noteworthy are Chaniotis’s excellent analyses of women and slavery… Highly recommended.
-- Choice

TABLE OF CONTENTS
Cover
Title Page
Copyright
Dedication
Contents
Maps
List of Figures
Preface
Introduction
Chapter 1. How It All Began: From Macedonia to the Oecumene (356–323 BC)
Chapter 2. The Successors: Adventurers and Architects of Kingdoms (323–275 BC)
Chapter 3. ‘Old’ Greece in the Short Third Century: Struggles for Survival, Freedom and Hegemony (279–217 BC)
Chapter 4. The Ptolemaic Golden Age (283–217 BC)
Chapter 5. Kings and Kingdoms
Chapter 6. The City-state in a World of Federations and Empires
Chapter 7. Entanglement: The Coming of Rome (221–188 BC)
Chapter 8. The Greek States Become Roman Provinces (188–129 BC)
Chapter 9. Decline and Fall of the Hellenistic Kingdoms in Asia and Egypt (188–80 BC)
Chapter 10. A Battlefield of Foreign Ambitions (88–30 BC)
Chapter 11. A Roman East: Local Histories and Their Global Context (30 BC–AD 138)
Chapter 12. Emperors, Cities and Provinces from Augustus to Hadrian (30 BC–AD 138)
Chapter 13. Socio-economic Conditions: From Greek Cities to an ‘Ecumenical’ Network
Chapter 14. Social and Cultural Trends: Benefactors, Confrères, Ephebes, Athletes, Women and Slaves
Chapter 15. From Civic Worship to Megatheism: Religions in a Cosmopolitan World
Chapter 16. The Greeks and the Oecumene
References and Sources
Bibliography
Chronology
Index