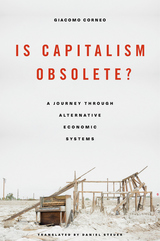 After communism collapsed in the former Soviet Union, capitalism seemed to many observers like the only game in town, and questioning it became taboo for academic economists. But the financial crisis, chronic unemployment, and the inexorable rise of inequality have resurrected the question of whether there is a feasible and desirable alternative to capitalism. Against this backdrop of growing disenchantment, Giacomo Corneo presents a refreshingly antidogmatic review of economic systems, taking as his launching point a fictional argument between a daughter indignant about economic injustice and her father, a professor of economics.

Is Capitalism Obsolete? begins when the daughter’s angry complaints prompt her father to reply that capitalism cannot responsibly be abolished without an alternative in mind. He invites her on a tour of tried and proposed economic systems in which production and consumption obey noncapitalistic rules. These range from Plato’s Republic to diverse modern models, including anarchic communism, central planning, and a stakeholder society. Some of these alternatives have considerable strengths. But daunting problems arise when the basic institutions of capitalism—markets and private property—are suppressed. Ultimately, the father argues, all serious counterproposals to capitalism fail to pass the test of economic feasibility. Then the story takes an unexpected turn. Father and daughter jointly come up with a proposal to gradually transform the current economic system so as to share prosperity and foster democratic participation.

An exceptional combination of creativity and rigor, Is Capitalism Obsolete? is a sorely needed work about one of the core questions of our times.

REVIEWS
A fascinating portrait of our economic system—and possible alternatives. Corneo[’s] is not an angry critique of capitalism… Nevertheless, [he] says quite soberly that something is wrong in our system… Are there other, better ways? …Could other systems produce enough resources to create general prosperity? …Such questions are asked by the economist in a refreshingly undogmatic way.
-- Joseph Gepp Falter Magazine [Vienna, Austria]


Is Capitalism Obsolete? is an important book, containing a sober, economically sophisticated analysis of the socialist alternatives to advanced capitalism. Timely, smart, and written in a popular vein, Corneo’s work will attract an audience as wide as the questions it seeks to answer.
-- John Roemer, Yale University


Corneo takes seriously the many criticisms of capitalism as it is practiced today but insists that detractors must confront the question of which alternative systems could realistically meet contemporary society’s economic needs. In this sweeping and informative discussion of the role of economy in society, he explores alternative systems, both hypothetical and real, and finds them all inferior to capitalism. The book then addresses how the modern welfare state has tempered capitalism’s worst features but has eroded since the late twentieth century—a development that is responsible for much of today’s public disillusionment with the free-market system. Corneo considers how the welfare state might be revived under current conditions, which would require new incentives for politicians and civil servants to construct a sturdier safety net.
-- Richard N. Cooper Foreign Affairs


Corneo takes us on a tour of a variety of alternative economic systems, from Plato’s Republic and More’s Utopia through anarchy, central planning, worker management, market socialism, shareholder socialism, and guaranteed basic income, to the market economy balanced by the welfare state. In each case, he explains the principles of the system, then considers how it would work in practice. More often than not, what appears on the surface to be an improvement over capitalism turns out to have fatal flaws when market and private property are removed from the equation…Both rigorous and entertaining.
-- M. Morgan-Davie Choice


An engaging volume that is well-balanced, often thought-provoking, and always accessible. More importantly, Corneo’s effort breathes new life into a conversation that is vital to the well-functioning of our democracy and to the sustainability of our economic system.
-- Simone Paci Brink