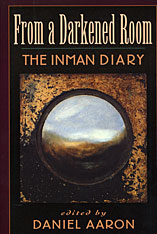 Only a few of us seek immortality, and fewer still by writing. But Arthur Inman challenged the odds. He calculated that if he kept a diary and spared no thoughts or actions, was entirely honest and open, and did not care about damage or harm to himself or others, he would succeed in gaining attention beyond the grave that he could not attain in life.

The diary became a many-layered and strikingly animated work of a gifted writer, by turns charming, repellent, shocking, cruel, and comical. But the diary is also an uninhibited history of his times, of his eccentricities and fantasies, of his bizarre marriage arrangements and sexual adventures. Inman’s explorations of his own troubled nature made him excessively curious about the secret lives of others. Like some ghostly doctor-priest, he chronicled their outpourings of head and heart as vividly as he did his own. The diary reads like a nonfiction novel as it moves inexorably toward disaster.

This is an abridged version of the celebrated two-volume work published by Harvard as The Inman Diary: A Public and Private Confession.

REVIEWS
A fascinating document, by turns bizarre and illuminating, poignant and obscene...Delving into Inman's diary is like being able to eavesdrop on a conversation in a priest's confessional or psychotherapist's office...It also presents the social historian with a panorama of the twentieth century viewed from an exotic angle.
-- Michael Vincent Miller New York Times