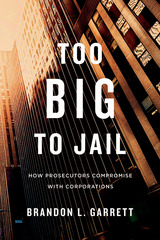 American courts routinely hand down harsh sentences to individual convicts, but a very different standard of justice applies to corporations. Too Big to Jail takes readers into a complex, compromised world of backroom deals, for an unprecedented look at what happens when criminal charges are brought against a major company in the United States.

Federal prosecutors benefit from expansive statutes that allow an entire firm to be held liable for a crime by a single employee. But when prosecutors target the Goliaths of the corporate world, they find themselves at a huge disadvantage. The government that bailed out corporations considered too economically important to fail also negotiates settlements permitting giant firms to avoid the consequences of criminal convictions. Presenting detailed data from more than a decade of federal cases, Brandon Garrett reveals a pattern of negotiation and settlement in which prosecutors demand admissions of wrongdoing, impose penalties, and require structural reforms. However, those reforms are usually vaguely defined. Many companies pay no criminal fine, and even the biggest blockbuster payments are often greatly reduced. While companies must cooperate in the investigations, high-level employees tend to get off scot-free.

The practical reality is that when prosecutors face Hydra-headed corporate defendants prepared to spend hundreds of millions on lawyers, such agreements may be the only way to get any result at all. Too Big to Jail describes concrete ways to improve corporate law enforcement by insisting on more stringent prosecution agreements, ongoing judicial review, and greater transparency.

REVIEWS
It is a first virtue of Garrett’s book that he places issues around crime in financial institutions in the broader context of corporate crime… Much of what law professors write is prescriptive but without a strong empirical foundation. This has started to change in recent years and Garrett’s work represents a further advance. He is to be hugely commended for the laborious task of compiling a database on every significant corporate prosecution in the 21st century that resulted either in a conviction or some kind of agreement between prosecutors and the corporation in question. Better yet, he makes this data available for other scholars on his university website. In addition to drawing on this database, Garrett provides narratives of some of the major cases that keep the reader at the edge of his seat. The reader emerges with a much greater sense of the complexities involved in responding to corporate crime… Garrett’s data and his narrative provide a textured understanding of [the] trade-offs…in dealing with corporate crime. And he provides a thoughtful and balanced set of recommendations for improving the process through, for example, more judicial involvement in enforcing deferred prosecution arrangements, better efforts to detect corporate crime and more efforts to hold individuals accountable. All of his advice seems reasonable, as does his conclusion that corporate prosecutions themselves are too important to fail… Like the poor, corporate criminals will always be with us. All future considerations of what to do about them should draw on Brandon Garrett’s important work.
-- Lawrence Summers Financial Times


Garrett presents for a lay readership a detailed and comprehensive examination of deferred corporate prosecutions, and corporate criminal prosecutions generally, and concludes that they have been, on the whole, ineffective… Garrett—on the basis of his own painstaking gathering of evidence (for neither the Department of Justice nor any other governmental entity keeps detailed and complete records of how such agreements are implemented over time)—finds that many, perhaps most such agreements, while often obscuring who was personally responsible for the company’s misconduct, fail to achieve meaningful structural or ethical reform within the company itself… The breadth of Garrett’s investigation, the wealth of detail he uses to support his conclusions, and the clarity of his prose make this an important book for laymen and experts alike.
-- Jed S. Rakoff New York Review of Books


[Garrett’s] book is the first systematic accounting of how many corporate prosecutions and settlements there have been in the last decade and how they work… Thankfully, given the data-heavy nature of his work, Garrett writes lucidly and with passion. His account is devastating… He convincingly demonstrates that the Justice Department is scared to indict the biggest companies in America.
-- Jesse Eisinger American Prospect


Reveals some of the rationale behind prosecutors’ anemic response against the banks [complicit in the recent financial meltdown], and the deep disconnect with populist anger over the fact that no executives have ended up behind bars.
-- Bailey Miller Washington Monthly


Garrett was curious to know how the U.S. criminal justice system works when large companies behave badly. When he discovered that no one keep any records he created his own, now accessible online as a public resource. His analysis lays the foundation for an overdue debate.
-- Celia Hampton Financial World


Garrett presents research on criminal behavior by corporations in the United States and overseas… While Garrett is mostly pessimistic about the ability of prosecutors to reduce corporate crime or to properly compensate the victims, he does find a few promising minitrends… Garrett combines groundbreaking research with clear writing and moral outrage.
-- Kirkus Reviews (starred review)


Garrett offers a cri de coeur for more corporate criminal prosecutions. Using data that he compiled, the author demonstrates that the U.S. Department of Justice has been inconsistent in its enforcement of relevant laws… What distinguishes this title from others is its clear discussion of the corporate misdeeds. It contrasts pious pronouncements by companies with details of greed and evasion. Garrett questions why high-ranking corporate officers are not prosecuted. The government, he maintains, lacks the resources and inclination to close errant businesses. Instead, it prefers fines, deferred prosecution agreements, and highly paid monitors. Much of the book details failures in prosecutions, such as not prosecuting corporate officers and failing to consider victims’ interests. The best part of the work is the author’s charts; these show that environmental crimes have been prosecuted vigorously, but food and drug violations much less so… A well-written, detailed exposé.
-- Harry Charles Library Journal


Too Big to Jail is a superb and comprehensive book, backed up by impressive original research. What is most striking, and most valuable, is that it drives home how amazingly new and bizarre is the current field of prosecuting corporations.
-- Samuel Buell, Duke University


Garrett highlights the disconnect between how federal prosecutors treat drug, immigration, and other violators, and how they treat firms engaging in criminal conduct. This is the first serious effort to look across all corporate prosecutions and assess the government’s regulatory effectiveness.
-- Daniel Richman, Columbia University

TABLE OF CONTENTS
Contents
Abbreviations
1. United States vs. Goliath
2. The Company in the Courtroom
3. What Happens to a Prosecution Deferred?
4. The Ostriches
5. The Victims
6. The Carrot and the Stick
7. Enter the Monitors
8. The Constitutional Rights of Corporations
9. Foreign Corporate Criminals
10. The Future of Corporate Prosecutions
Appendix
Notes
Acknowledgments
Index