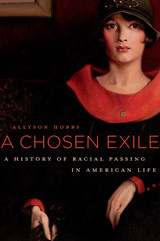 Between the eighteenth and mid-twentieth centuries, countless African Americans passed as white, leaving behind families and friends, roots and community. It was, as Allyson Hobbs writes, a chosen exile, a separation from one racial identity and the leap into another. This revelatory history of passing explores the possibilities and challenges that racial indeterminacy presented to men and women living in a country obsessed with racial distinctions. It also tells a tale of loss.

As racial relations in America have evolved so has the significance of passing. To pass as white in the antebellum South was to escape the shackles of slavery. After emancipation, many African Americans came to regard passing as a form of betrayal, a selling of one’s birthright. When the initially hopeful period of Reconstruction proved short-lived, passing became an opportunity to defy Jim Crow and strike out on one’s own.

Although black Americans who adopted white identities reaped benefits of expanded opportunity and mobility, Hobbs helps us to recognize and understand the grief, loneliness, and isolation that accompanied—and often outweighed—these rewards. By the dawning of the civil rights era, more and more racially mixed Americans felt the loss of kin and community was too much to bear, that it was time to “pass out” and embrace a black identity. Although recent decades have witnessed an increasingly multiracial society and a growing acceptance of hybridity, the problem of race and identity remains at the center of public debate and emotionally fraught personal decisions.

REVIEWS
[An] incisive cultural history… [Hobbs] takes nothing at face value—least of all the idea that the person who is passing is actually and truly of one race or the other… [A] critically vigilant work.
-- Danzy Senna New York Times Book Review


A book that is at once literary, cultural, archival and social, crossing the borders of various approaches to the study of history in order to create a collage of a fascinating yet elusive phenomenon. Intrigued by the story of a distant relative who crosses the color line, Hobbs has followed this interest to explore the practice of passing with detail and rigor. Her writing is elegant, bubbling with curiosity even as it is authoritative and revelatory.
-- Imani Perry San Francisco Chronicle


The book is an admirable effort to catalogue the myriad classifications of race in America, to develop a taxonomy of biases that endure even as the country’s complexion changes.
-- Joshua Cohen Harper’s


[An] excellent book… Hobbs populates her book with figures from the past who expose the motivations for ‘passing’ as white, and the costs. Necessarily, Hobbs writes, passing involves erasure: gradations gone, subtleties of color and culture reduced to black and white. What’s lost in the process: families and friends, a sense of belonging. A Chosen Exile illuminates those losses with acuity, rigor, and compassion.
-- Julie Orringer Paris Review


Hobbs provides fresh analysis of an oft-ignored phenomenon, and the result is as fascinating as it is innovative. She foregrounds the sense of loss that passing inflicted, and argues that many of those who were left behind were just as wounded and traumatized as those who departed. Those who passed may have had much to gain, but what were the hidden costs, the invisible scars of enforced patterns of subversion and suppression? She suggests that the core issue of passing is not what an individual becomes, but rather ‘losing what you pass away from.’ By turning safe assumptions inside out, Hobbs questions some of the longest-held ideas about racial identification within American society.
-- Catherine Clinton Times Higher Education


Passing, as Allyson Hobbs describes in this brilliant, fascinating new study, is itself as fluid, complex, and contradictory as our ideas of race.
-- Kate Tuttle Boston Globe


By investigating the binary lives of the so-called ghosts that exist in American history, Hobbs raises important questions and ideas about race relations and the ‘lost’ histories of African American communities.
-- Cicely Douglas Library Journal


In narrating the lives of Americans at the border of whiteness, Hobbs illuminates our understanding of our country’s tortured race history and of the injustices that drove people to make the ultimate migration—out of the tyranny of enslavement and the terrors of Jim Crow to the costly privilege of the larger white world. Their anguish, alienation, and constant fear of discovery are brilliantly and painfully rendered in this important book, and, through them, we see the arbitrariness of race and the origins of racial divisions that we live with to this day.
-- Isabel Wilkerson, author of The Warmth of Other Suns: The Epic Story of America’s Great Migration


With remarkable research and deep feeling for her subjects, Hobbs uncovers the stories of countless Americans of African descent who severed their family ties to pass into a world where they would be accorded the privileges of whites. At turns sad, inspiring, and provocative, the book raises important questions about the enduring power of race in American life.
-- Martha A. Sandweiss, author of Passing Strange: A Gilded Age Tale of Love and Deception Across the Color Line