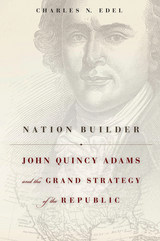 “America goes not abroad, in search of monsters to destroy”—John Quincy Adams’s famous words are often quoted to justify noninterference in other nations’ affairs. Yet when he spoke them, Adams was not advocating neutrality or passivity but rather outlining a national policy that balanced democratic idealism with a pragmatic understanding of the young republic’s capabilities and limitations. America’s rise from a confederation of revolutionary colonies to a world power is often treated as inevitable, but Charles N. Edel’s provocative biography of Adams argues that he served as the central architect of a grand strategy that shaped America’s rise. Adams’s particular combination of ideas and policies made him a critical link between the founding generation and the Civil War–era nation of Lincoln.

Examining Adams’s service as senator, diplomat, secretary of state, president, and congressman, Edel’s study of this extraordinary figure reveals a brilliant but stubborn man who was both visionary prophet and hard-nosed politician. Adams’s ambitions on behalf of America’s interests, combined with a shrewd understanding of how to counter the threats arrayed against them, allowed him to craft a multitiered policy to insulate the nation from European quarrels, expand U.S. territory, harness natural resources, develop domestic infrastructure, education, and commerce, and transform the United States into a model of progress and liberty respected throughout the world.

While Adams did not live to see all of his strategy fulfilled, his vision shaped the nation’s agenda for decades afterward and continues to resonate as America pursues its place in the twenty-first-century world.

REVIEWS
Nation Builder: John Quincy Adams and the Grand Strategy of the Republic is an intellectual biography rather than a full-dress life. Few presidents merit such treatment as much as Adams, who, through essays, speeches, letters and a diary kept meticulously over almost 70 years, left a remarkable record of a great mind at work on the prospects of the young, fragile nation… For Adams, greatness without virtue—like the greatness of Napoleon—was monstrous. Principle was everything. I don’t know that today’s grand strategists would find Adams’s exacting standards congenial. He was, as Edel demonstrates, a farseeing man. But he asked more of America than it is inclined to ask of itself.
-- James Traub Wall Street Journal


2014 has been a surprisingly fruitful year for studies of John Quincy Adams, and Edel’s book is in many ways the most intelligent of the bunch. The Adams who emerges from his pages is a fittingly complex figure, as often at war with his own nature as he was with the petty partisanship or Southern slaveholding of his day. Edel’s readers will take away from his book a new appreciation of how much the United States they know owes to this early President they’ve scarcely heard of.
-- Steve Donoghue Open Letters Monthly


Charles Edel’s accurate, honest, and sensitive portrait gets both the history and timeless wisdom of John Quincy Adams exactly right. His ambitious grand strategy was designed for nation building—at home, in North America.
-- Walter A. McDougall, University of Pennsylvania


Ideas and power are the key ingredients of national achievement, and John Quincy Adams mastered both at a crucial time in American history. Anyone interested in the history of our society and its future possibilities will benefit from this provocative and compelling account of Adams’s life, his thought, and his enduring legacies.
-- Jeremi Suri, author of Liberty’s Surest Guardian: American Nation-Building from the Founders to Obama


Edel shows convincingly that Adams was the first to advance a comprehensive vision for his country. His ‘grand strategy’ required setting clear priorities and knowing how to tie them together in the proper sequence. Those priorities were neutrality with regard to the European powers, continental expansion westward, and promotion of economic development in the belief that improvement of the lives of ordinary citizens would strengthen republicanism. A last priority, not achieved in his lifetime, was to work for the abolition of slavery, which he regarded as a ‘stain’ on the character of the nation.
-- D. J. Maletz Choice


[This book] has surprising resonance with the present.
-- James Fallows The Atlantic

TABLE OF CONTENTS
Contents
Introduction
1. The Fires of Honorable Ambition: The Education of John Quincy Adams
2. Clans and Tribes at Eternal War: European Diplomacy and American Politics
3. In Search of Monsters to Destroy: The Extent and Limits of American Power
4. The Spirit of Improvement: Economic and Moral Development
5. A Stain upon the Character of the Nation: The Fight against Slavery
6. The Influence of Our Example: The Legacy of John Quincy Adams
Notes
Acknowledgments
Index