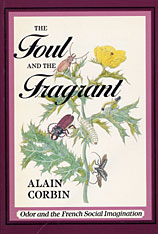 In a book whose insight and originality have already had a dazzling impact in France, Alain Corbin has put the sense of smell on the historical map. He conjures up the dominion that the combined forces of smells - from the seductress's civet to the ubiquitous excremental odors of city cesspools - exercised over the lives (and deaths) of the French in the eighteenth and nineteenth centuries.

Part One: The Perceptual Revolution or the Sense of Smell on Trial

1. Air and the Threat of the Putrid
2. The Extremes of Olfactory Vigilance
3. Social Emanations
4. Redefining the Intolerable
5. The New Calculus of Olfactory Pleasure

6. The Tactics of Deodorization
7. Odors and the Physiology of the Social Order
8. Policy and Pollution

9. The Stench of the Poor
10. Domestic Atmospheres
11. The Perfumes of Intimacy
12. The Intoxicating Flask
13. "Laughter in a Bead of Sweat"
14. The Odors of Paris


Reviews of this book:
[This book] is not only serious, but interesting and important; one of those studies that profoundly alters our understanding of both social life and history.
--Joan W. Scott, New York Times Book Review

Reviews of this book:
At once encyclopedic and impressionistic, The Foul and the Fragrant is...a masterful exposition of odors and the perception of odors from 1750 to the "Pasteurian revolution" of the late nineteenth century...It is an important and, at times, fascinating voyage...Exploring with imagination and audacity the changing role of smell in the anxieties and antagonisms of the modern world, Corbin reminds us that social history, too long sanitized and too often abstract, must make room for the senses.
--Michael Burns, Los Angeles Times Book Review

Reviews of this book:
The story has never been told more brilliantly, nor with such verve and perceptiveness. That alone would make Corbin's book worth reading, but one may read it as well for a deeper understanding of the roots of modern urban anxieties about the unwholesome...Corbin's book is a tour de force.
--Simon Schama, New Republic
TABLE OF CONTENTS