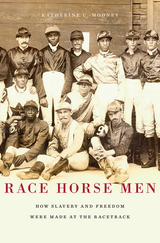 A popular pastime across American society, horse racing was most closely identified with an elite class of southern owners who bred horses and bet large sums of money on these spirited animals. The central characters in this story are not privileged whites, however, but the black jockeys, grooms, and horse trainers who sometimes called themselves race horse men and who made the racetrack run. Mooney describes a world of patriarchal privilege and social prestige where blacks as well as whites could achieve status and recognition and where favored slaves endured an unusual form of bondage. For wealthy white men, the racetrack illustrated their cherished visions of a harmonious, modern society based on human slavery.

After emancipation, a number of black horsemen went on to become sports celebrities, their success a potential threat to white supremacy and a source of pride for African Americans. The rise of Jim Crow in the early twentieth century drove many horsemen from their jobs, with devastating consequences for them and their families. Mooney illuminates the role these too-often-forgotten men played in Americans' continuing struggle to define the meaning of freedom.

REVIEWS
Writing with exceptional polish and élan, Katherine Mooney succeeds brilliantly at restoring humanity to black jockeys and trainers. This superb book says as much about the cruelties and distortions wrought by racism in nineteenth-century America as any single book can.
-- W. Fitzhugh Brundage, author of The Southern Past: A Clash of Race and Memory


Katherine Mooney leads us inside the paddock and beyond the finish line to reveal how horse racing shaped American society and molded race relations. In doing so, she brings to life the struggles of numerous individuals long lost to history. The result is an eye-opening and important book.
-- Louis P. Masur, author of Lincoln’s Hundred Days: The Emancipation Proclamation and the War for the Union


Katherine Mooney gives us a vivid, pioneering study of the horse-racing world, a mainstay of nineteenth-century American and Southern culture. Her portrayal of the lives of black jockeys is a revelation. She uses sporting drama to illuminate the interplay between callousness and selective personal affection that pervaded white attitudes toward blacks.
-- Melvin Patrick Ely, author of Israel on the Appomattox: A Southern Experiment in Black Freedom from the 1790s Through the Civil War


Black men were active in 19th-century racing, most prominent in the South, as jockeys, grooms, and trainers for this first large spectator sport in the United States…But Mooney shows how white resentment of black presence and success at the race track increased. Whites feared that the example of success that these race-horse men set would incite other blacks to demand more rights and become violent. With the rise of Jim Crow in the South, blacks were driven out of the sport.
-- Patsy Gray Library Journal


Mooney’s book draws on the stories and memoirs of a range of figures across racing, as the sport became simultaneously a Southern specialty and an object of popular fascination. Race Horse Men is stitched out of these portraits, many of which are wonderfully effective in revealing just how ambiguous, for example, the situation of enslaved grooms, trainers, jockeys, and breeding-shed managers could be…Mooney’s book is at its strongest when it peers not into the clubhouse but out into the stables…She positions her history to thread together a large chunk of time, when racing carried the burden of chattel slavery and civil war.
-- Eric Banks Chronicle of Higher Education


Katherine Mooney’s enthralling account of an all-but-forgotten population of elite slaves in the American South reads like a novel. Race Horse Men is both the story of 19th century thoroughbred racing--‘America’s first mass-audience sport’--and a detailed portrait of the expert equestrian slaves and free black horsemen upon whose competence in the stables wealthy white ‘turfmen’ depended…Mooney makes a strong case for why these forgotten histories continue to illuminate systems of inequality to this day.
-- Thomas Chatterton Williams San Francisco Chronicle


It is that history--of rich white men, enslaved black men, and the birth of American horse racing--that Katherine C. Mooney tells in Race Horse Men. Scholarly yet accessible, the book argues that far from subverting the racist notions of the slave-holding South, black horsemen were seen as ‘the perfect slaves, precisely calibrated extensions of a master’s will’ and ‘central figures in turfmen’s vision of the harmony of a slave society.’
-- Kate Tuttle Boston Globe

TABLE OF CONTENTS
Contents
Prologue: The Loss of the Stirrup Has Won the Race
1. The Glory of the Four-Mile Horse
2. Knowed a Horse When He Seed Him
3. A Storm Is Approaching
4. These Are the Verities
5. The Only Practical Means of Reunion
6. I Ride to Win
7. I Have Got That Nigger Beat
Epilogue: He Didn’t Go in No Back Doors!
Notes
Acknowledgments
Index