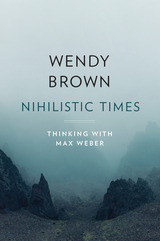 One of America’s leading political theorists analyzes the nihilism degrading—and confounding—political and academic life today. Through readings of Max Weber’s Vocation Lectures, she proposes ways to counter nihilism’s devaluations of both knowledge and political responsibility.

How has politics become a playpen for vain demagogues? Why has the university become an ideological war zone? What has happened to Truth? Wendy Brown places nihilism at the center of these predicaments. Emerging from European modernity’s replacement of God and tradition with science and reason, nihilism removes the foundation on which values, including that of truth itself, stand. It hyperpoliticizes knowledge and reduces the political sphere to displays of narcissism and irresponsible power plays. It renders the profound trivial, the future unimportant, and corruption banal.

To consider remedies for this condition, Brown turns to Weber’s famous Vocation Lectures, delivered at the end of World War I. There, Weber himself decries the effects of nihilism on both scholarly and political life. He also spells out requirements for re-securing truth in the academy and integrity in politics. Famously opposing the two spheres to each other, he sought to restrict academic life to the pursuit of facts and reserve for the political realm the pursuit and legislation of values.

Without accepting Weber’s arch oppositions, Brown acknowledges the distinctions they aim to mark as she charts reparative strategies for our own times. She calls for retrieving knowledge from hyperpoliticization without expunging values from research or teaching, and reflects on ways to embed responsibility in radical political action. Above all, she challenges the left to make good on its commitment to critical thinking by submitting all values to scrutiny in the classroom and to make good on its ambition for political transformation by twinning a radical democratic vision with charismatic leadership.

REVIEWS
In Nihilistic Times, the most important political theorist of her generation models how to think with someone else. Through a spirited engagement with Max Weber, Wendy Brown confronts the challenge of creating meaning in a disturbed age. To read this book is to rediscover what the real work of higher education is.
-- Kathryn Lofton, author of Consuming Religion


Drawing inspiration from Max Weber, as well as Friedrich Nietzsche, Wendy Brown boldly and incisively argues that nihilism underpins our current social, economic, and political crises. Brown is one of the most original political theorists writing today, and her analytically astute engagement with Weber’s Vocation Lectures is essential reading for everyone who harbors hope for a democratic repair of the world.
-- Robert Gooding-Williams, author of In the Shadow of Du Bois


In two luminous essays, Wendy Brown rereads Max Weber’s two iconic Vocation Lectures from a century ago. Retooling Weber’s attacks on nihilistic politics and nihilistic science, Brown helps us understand—and resist—current nihilisms, like techno-rationalism and demagoguery. She gives us back what should be our highest political value: the shared act of creating values, in a feeling–thinking way.
-- Paul North, author of Bizarre-Privileged Items in the Universe


In Max Weber, Wendy Brown finds an unexpected ally and a surprising contemporary who gives her the key to a post-nihilist strategy. It is the only chance we have of restoring meaning to politics, namely by shaping the world democratically and regaining control without destroying the world and our very sense of what is real. Both a masterful interpretation of Weber and a most urgent, necessary intervention in political discourse, Brown's book leads us to a new Weber for the left and a way out of what she calls our present-day ‘pre-apocalyptic survivalism.' A most exciting book that will change how we understand our disturbing times.
-- Rahel Jaeggi, author of Critique of Forms of Life


For Brown, scholarship and teaching are callings in the Weberian sense to the extent that they demand a range of renunciations (of political propagandizing, moral preaching, and practical payoff), but she departs from Weber in her far more optimistic assessment of scholarship’s role in ‘developing an informed, politically engaged citizenry.’
-- Len Gutkin Chronicle of Higher Education