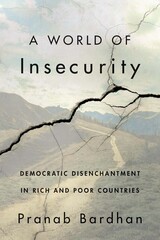 An ambitious account of the corrosion of liberal democracy in rich and poor countries alike, arguing that antidemocratic sentiment reflects fear of material and cultural loss, not a critique of liberalism’s failure to deliver equality, and suggesting possible ways out.

The retreat of liberal democracy in the twenty-first century has been impossible to ignore. From Wisconsin to Warsaw, Budapest to Bangalore, the public is turning against pluralism and liberal institutions and instead professing unapologetic nationalism and majoritarianism. Critics of inequality argue that this is a predictable response to failures of capitalism and liberalism, but Pranab Bardhan, a development economist, sees things differently. The problem is not inequality but insecurity—financial and cultural.

Bardhan notes that antidemocratic movements have taken root globally in a wide range of demographic and socioeconomic groups. In the United States, older, less-educated, rural populations have withdrawn from democracy. But in India, the prevailing Hindu Nationalists enjoy the support of educated, aspirational urban youth. And in Europe, antidemocratic populists firmly back the welfare state (but for nonimmigrants). What is consistent among antidemocrats is fear of losing what they have. That could be money but is most often national pride and culture and the comfort of tradition.

A World of Insecurity argues for context-sensitive responses. Some, like universal basic income schemes, are better suited to poor countries. Others, like worker empowerment and international coordination, have broader appeal. But improving material security won’t be enough to sustain democracy. Nor, Bardhan writes, should we be tempted by the ultimately hollow lure of China’s authoritarian model. He urges liberals to adopt at least a grudging respect for fellow citizens’ local attachments. By affirming civic forms of community pride, we might hope to temper cultural anxieties before they become pathological.

REVIEWS
Wide-ranging…Policy makers, labor activists, and economists will find much to chew on.
-- Publishers Weekly


Situating American Trumpism within a global story of the rise of antidemocratic politics in other big, diverse countries like Brazil and India,…[Bardhan] presents a sober contemplation of demagogues like Jair Bolsonaro and Narendra Modi, who weaken democracy with the support of disaffected electoral majorities.
-- Alexander Burns New York Review of Books


An accessible book, challenging but with impressive and topical examples.
-- Christine Shields Society of Professional Economists


In this important book, Pranab Bardhan explores how and why the insecurities of our age have metastasized into our democratic institutions. These cancers on democracy block the cooperation necessary for solution of all other major problems. Thus, they are arguably the most consequential developments of our times.
-- George Akerlof, 2001 Nobel Laureate in Economics


Pranab Bardhan is one of the wisest social scientists writing today, and the hallmarks of his writing are parsimony, clarity, and the depth of ideas. Indeed, the ratio of ideas to pages is among the highest in our field. A World of Insecurity is a panoramic book weaving together an analysis of the current economic and political crisis, acutely discussed by a master political economist.
-- John Roemer, Yale University


A World of Insecurity is an outstanding work. Bardhan tackles hard questions without illusions but also without becoming disillusioned.
-- Samuel Bowles, Santa Fe Institute, author of The Moral Economy: Why Good Incentives Are No Substitute for Good Citizens

TABLE OF CONTENTS
Cover
Title Page
Copyright
Contents
Introduction
1. Insecurity, Inequality, and Democracy
2. Taking Back Control: Back to the Community?
3. The Wildfire of Resurgent Nationalism
4. The Temptation of Authoritarianism
5. The Slippery Slope of Majoritarianism
6. Social Democracy Redux
7. Social Democracy and Capitalism: A Restructuring of Their Fraught Link
8. In Search of Economic Security: Universal Basic Income
9. In Search of Security: Other Policies
References
Acknowledgments
Index