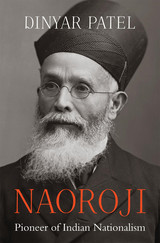 The definitive biography of Dadabhai Naoroji, the nineteenth-century activist who founded the Indian National Congress, was the first British MP of Indian origin, and inspired Gandhi and Nehru.

Mahatma Gandhi called Dadabhai Naoroji the “father of the nation,” a title that today is reserved for Gandhi himself. Dinyar Patel examines the extraordinary life of this foundational figure in India’s modern political history, a devastating critic of British colonialism who served in Parliament as the first-ever Indian MP, forged ties with anti-imperialists around the world, and established self-rule or swaraj as India’s objective.

Naoroji’s political career evolved in three distinct phases. He began as the activist who formulated the “drain of wealth” theory, which held the British Raj responsible for India’s crippling poverty and devastating famines. His ideas upended conventional wisdom holding that colonialism was beneficial for Indian subjects and put a generation of imperial officials on the defensive. Next, he attempted to influence the British Parliament to institute political reforms. He immersed himself in British politics, forging links with socialists, Irish home rulers, suffragists, and critics of empire. With these allies, Naoroji clinched his landmark election to the House of Commons in 1892, an event noticed by colonial subjects around the world. Finally, in his twilight years he grew disillusioned with parliamentary politics and became more radical. He strengthened his ties with British and European socialists, reached out to American anti-imperialists and Progressives, and fully enunciated his demand for swaraj. Only self-rule, he declared, could remedy the economic ills brought about by British control in India.

Naoroji is the first comprehensive study of the most significant Indian nationalist leader before Gandhi.

REVIEWS
Dadabhai Naoroji was a greatly influential figure in his time: a major political actor in India and Great Britain; a pioneer of struggles against racism and imperialism; and a prolific author on religious, economic, and social subjects. Yet Naoroji has been shockingly neglected by generations of historians—now, he has at last been rehabilitated in this magnificent new biography. Dinyar Patel draws on many new, rare, and obscure sources; he writes brilliantly, and he superbly sets Naoroji’s incident-filled life against the backdrop of the tumultuous times he lived through. This is an exemplary work of scholarship that emphatically restores Naoroji to his rightful place in the history of India, Great Britain, and the world.
-- Ramachandra Guha, author of Gandhi: The Years That Changed the World


An absorbing biography of the first Indian ever to be elected to the House of Commons…This ‘pioneer of Indian nationalism’ is almost entirely forgotten in India…The erudition of [Patel’s] enterprise, while everywhere evident, is never daunting.
-- Tunku Varadarajan Wall Street Journal


[An] important biography…Tells the story of a particular individual but also of the networks that shaped him: a global history of a single man. [Patel’s] account illuminates the intellectual richness and dynamism of the early Indian nationalist movement, but also opens a window onto the histories of Britain’s Indian community and the global Indian diaspora.
-- Priya Satia London Review of Books


Now we have the biography that Naoroji deserves…It powerfully restores Naoroji to his place as a central figure in India’s long struggle for freedom…A disciplined narrative, composed with a historian’s eye for detail. The result is a fine-grained account of Naoroji’s political life…A wonderful read that tells the story of a remarkable life and provides a compelling insight into Indian nationalism and the worlds of Bombay and Victorian London.
-- Abhimanyu Arni Literary Review


In this beautifully crafted and subtly argued biography, Dinyar Patel illuminates the Indian freedom struggle’s devastating critique of imperialism and its exemplary politics of resistance. Dadabhai Naoroji was at the forefront of them both. His politics and ideas, like those of his counterparts throughout the global south, are of equal relevance to Indian and European history and helped usher in the world we live in today.
-- Sven Beckert, author of The Empire of Cotton: A Global History


Dinyar Patel’s compelling biography traces the development of Dadabhai Naoroji’s prophetic thought. From scholar and religious reformer to the precursor and inspiration for Gandhi’s movement for Indian independence, Naoroji’s ideological trajectory is vividly presented by Patel as the gestation and triumph of historical anticolonialism.
-- Farrukh Dhondy, author of C. L. R. James: A Life


Naoroji is a lucid, well-paced, and wonderfully illuminating biography, one that should help return this important historical figure to scholarly and public attention. Patel demonstrates Naoroji’s remarkable capacities for political empathy and engagement with a parade of issues and causes, all the while staying true to his own core interests and values. An excellent portrait and authoritative account.
-- Sunil Khilnani, author of Incarnations: A History of India in Fifty Lives


Dinyar Patel’s splendid biography draws on an enormous collection of sources largely untouched by historians and illuminates the astonishing range of Naoroji’s public activities as a pioneering political figure in Britain and India. This superbly researched, revisionist account is unlikely to be surpassed any time soon.
-- Srinath Raghavan, author of Fierce Enigmas: A History of the United States in South Asia


A sophisticated and elegantly written intellectual biography and history of ideas, Dinyar Patel’s book on the ‘grandfather’ of the Indian nation sheds new light on Parsi political choices, the urban history of Bombay, and anti-colonial politics in metropolitan London. Patel’s exploration of Dadabhai Naoroji’s international itineraries provides a fascinating new angle to the study of Indian nationalism.
-- Sugata Bose, author of His Majesty’s Opponent: Subhas Chandra Bose and India’s Struggle against Empire


Straightforward in style, and well-detailed in approaches to a life as it intersected with multiple, complex movements, places, ideologies, Naoroji addresses the vacuum in the pre-Gandhian political history of modern India. It is a much-needed intervention in acknowledgment of the contribution of Indian freedom fighters before there were Indian freedom fighters.
-- Soni Wadhwa Asian Review of Books


A fine biography of the first Indian political leader of the modern era with a truly national following… Some defining features of Naoroji shine through in the book…Patel has done well to write a deeply researched biography of a man who has been largely forgotten.
-- Niranjan Rajadhyaksha Livemint


Will be of great interest to students of economics and political science as well as of Indo-British history. It draws the reader into Naoroji’s huge hinterland of knowledge, writings and achievements. What comes across is Naoroji’s passionate commitment to the concept of (an) Indian nationhood within the parameters of the British rule…[An] extraordinary biography…A hero and role model not only to his contemporaries but also to future leaders like Gandhi and Jinnah.
-- Ramnik Shah LSE Review of Books


[A] pioneering book…Patel does an admirable…job of presenting to his readers a full and rounded picture of Naoroji…I cannot see Patel’s book being surpassed in the sheer scale of his documentary coverage and empirical detail.
-- Rudrangshu Mukherjee Business Standard


Speaks volumes about his greatness…Naoroji was the most important modern Indian leader before Gandhi. It is hard to imagine what Indian nationalism would have looked like without him.
-- Kumar Chellappan The Pioneer


A definitive biography of the Indian leader, offering unique insights into his early life before he became a voice for free India.
-- Fiona Fernandez Mid-Day


This biography enlightened me about his extraordinary life.
-- Simon McGrath Liberal Democrat Voice


Splendidly researched, elegantly written…Not only extends our understanding of early Indian nationalism but also throws light on the world of Victorian Britain and the intellectual and political currents that fed into it…[An] engaging biography.
-- A. R. Venkatachalapathy The Wire