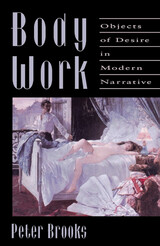 The desire to know the body is a powerful dynamic of storytelling in all its forms. Peter Brooks argues that modern narrative is intent on uncovering the body in order to expose a truth that must be written in the flesh. In a book that ranges widely through literature and painting, Brooks shows how the imagination strives to bring the body into language and to write stories on the body.

From Rousseau, Balzac, Mary Shelley, and Flaubert, to George Eliot, Zola, Henry James, and Marguerite Duras, from Manet and Gauguin to Mapplethorpe, writers and artists have returned in fascination to the body, the inescapable other of the spirit. Brooks's deep understanding of psychoanalysis informs his demonstration of how the "epistemophilic urge"--the desire to know-guides fictional plots and our reading of them.

It is the sexual body that furnishes the building blocks of symbolization, eventually of language itself-which then takes us away from the body. Yet mind and language need to recover the body, as an other realm that is primary to their very definition. Brooks shows how and why the female body has become the field upon which the aspirations, anxieties, and contradictions of a whole society are played out. And he suggests how writers and artists have found in the woman's body the dynamic principle of their storytelling, its motor force.

This major book entertains and teaches: Brooks presumes no special knowledge on the part of his readers. His account proceeds chronologically from Rousseau in the eighteenth century forward to contemporary artists and writers. Body Work gives us a set of analytical tools and ideas-primarily from psychoanalysis, narrative and film studies, and feminist theory-that enable us to read modern narrative afresh.

REVIEWS
A fascinating and most thought-provoking book.
-- Juliet Mitchell