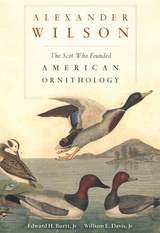 Audubon was not the father of American ornithology. That honorific belongs to Alexander Wilson, whose encyclopedic American Ornithology established a distinctive approach that emphasized the observation of live birds. In the first full-length study to reproduce all of Wilson’s unpublished drawings for the nine-volume Ornithology, Edward Burtt and William Davis illustrate Wilson’s pioneering and, today, underappreciated achievement as the first ornithologist to describe the birds of the North American wilderness.

Abandoning early ambitions to become a poet in the mold of his countryman Robert Burns, Wilson emigrated from Scotland to settle near Philadelphia, where the botanist William Bartram encouraged his proclivity for art and natural history. Wilson traveled 12,000 miles on foot, on horseback, in a rowboat, and by stage and ship, establishing a network of observers along the way. He wrote hundreds of accounts of indigenous birds, discovered many new species, and sketched the behavior and ecology of each species he encountered.

Drawing on their expertise in both science and art, Burtt and Davis show how Wilson defied eighteenth-century conventions of biological illustration by striving for realistic depiction of birds in their native habitats. He drew them in poses meant to facilitate identification, making his work the model for modern field guides and an inspiration for Audubon, Spencer Fullerton Baird, and other naturalists who followed. On the bicentennial of his death, this beautifully illustrated volume is a fitting tribute to Alexander Wilson and his unique contributions to ornithology, ecology, and the study of animal behavior.

REVIEWS
A definitive work on the history of bird art, ornithology, and nature writing. Volumes have been written on Audubon as though he were the dean of American ornithology, but Burtt and Davis reveal Alexander Wilson as providing the foundation.
-- Bernd Heinrich, author of The Nesting Season


Our knowledge of New World birds stems deeply from the adventurous spirit of a talented rebel poet, Alexander Wilson. This richly illustrated, very special book brings him back to life as an engaging and influential character whose passion for birds primed ours. I couldn't put it down.
-- Frank Gill, author of Ornithology, 3rd Edition

One of the objectives of this book is to publish all of Wilson's previously unpublished illustrations...Wilson's artwork is superb...The case Burtt and Davis make for Wilson being the true father of American ornithology is overwhelming, and in that sense they
have succeeded admirably.


Wilson has more birds named after him than any other American ornithologist, including Audubon, and now, thanks to Burtt and Davis, he has a superb modern-day biography and critical assessment, one every scholarly birder should buy and read. It's entirely right that we regularly remember to give Alexander Wilson the credit for inventing the school and ethos of American bird-study.
-- Steve Donoghue Open Letters Monthly


Before Audubon and Birds of America, there was Alexander Wilson and American Ornithology, a nine-volume work published between 1808 and 1814 that single-handedly transformed the study of birds in the wild and presaged the field guides of today. In addition to being the first to adopt the Linnaean system of binomial nomenclature to classify North American birds, Wilson was also one of the first to base his findings primarily on the 'observation and description of live birds.' By 1812, the Scottish poet had documented nearly 80% of bird species in the United States, and developed the discipline of 'economic ornithology,' whereby bird types are valued according to a kind of cost-benefit analysis (i.e. one that takes into account whether a bird is prone to destroy certain crops, whether they can be consumed, etc.)...What makes this book of such great value is the third chapter: 'Illustrating American Ornithology.' Composing over half of the book, this section features every illustration from Wilson's landmark publication. Alongside excerpts from Wilson's own commentary, the authors painstakingly detail how each sketch developed into its final iteration. A must-have for any serious bird-watcher."
-- Publishers Weekly


Wilson was first to describe 26 species of North American birds, he has more birds named after him than any other American ornithologist, and John James Audubon, Charles Lucien Bonaparte, Thomas Nuttall, Spencer Fullerton Baird, and Elliot Coues all were inspired by him, yet most people, when asked who the father of American ornithology is, say, wrongly, Audubon. This well-illustrated study, the first to reproduce many of Wilson's drawings and draft plates from American Ornithology, his nine-volume masterwork, sets the record straight.
-- Chuck Hagner and Matt Mendenhall Bird Watching


It is as the author of American Ornithology--a nine-volume work that aimed to list every species in the U.S.--that Wilson will be remembered. Wilson's books were revolutionary. He wrote his descriptions of birds from observing them in the field, rather than looking at stuffed birds in collections. It was an approach that helped promote the adoption of the scientific method in the U.S. He also penned his narrative so that readers would be able to identify birds themselves, making it the first field guide...Wilson's life and his struggle to publish American Ornithology are fascinating.
-- Peter Ranscombe The Scotsman


Burtt and Davis argue convincingly for Wilson's contribution to modern scientific ornithology and celebrate Wilson as the man who inspired John James Audubon...This book...give[s] us Wilson's wonderful illustrations--and a sense of the spirit of an extraordinary man whose curiosity reached far beyond the man-made world.
-- Karin Altenberg Wall Street Journal


A Scottish emigré, Alexander Wilson (1766-1813) became the preeminent ornithologist of early America. His systematic approach to the study of birds and his nine-volume American Ornithology (1808-14) greatly influenced John James Audubon, in whose shadow Wilson has since remained...Burtt and Davis describe Wilson's mentoring by such prominent figures as Thomas Jefferson, Meriwether Lewis, William Bartram, and the Philadelphia family of artists, the Peales...The authors show that it is Wilson, rather than Audubon, who deserves the sobriquet of the father of American ornithology...This excellent work is highly recommended for birders and for readers who appreciate American art or natural history.
-- Henry T. Armistead Library Journal


Alexander Wilson, the Scotsman who came to the United States in 1794, ...more than Audubon, deserves credit for having founded American ornithology, as biographers Edward Burtt and William Davis rightly insist.


[Burtt and Davis] are in no doubt that their man is the one to deserve the title of 'Father' [of American ornithology]...And it is a strong case, convincingly made...This will be a very valuable resource for scholars, and the drawings themselves are attractive and persuasive evidence for the authors' claims about Wilson's originality and importance. The authors and publishers have done full justice to these illustrations in this handsome volume and they are beautifully laid out and reproduced.
-- Jeremy Mynott Times Literary Supplement


Burtt and Davis include brief essays on the ornithologists whom Wilson read or corresponded with, providing a valuable overview of the burgeoning natural sciences of the early nineteenth century...They establish Wilson's stature as a bird illustrator, and their handsome volume reproduces them beautifully...Burtt and Davis successfully make clear Wilson's importance in establishing American ornithology on two firm pillars: international Linnaean binomial nomenclature and close observation of living birds as well as specimens...Wilson's position as the founder of American ornithology was won with intense struggle from inauspicious beginnings, and it seems secure.


The book includes many letters to and from U.S. naturalists and dozens of beautifully reproduced and previously unpublished line drawings and paintings of birds that contributed to Wilson’s greatest tangible achievement, the encyclopedic nine-volume American Ornithology. Unlike most of his contemporaries, such as Audubon, Wilson argued for the need for field observation to truly understand and illustrate the character of wild creatures, and he traveled thousands of miles across a wild continent to accomplish this. This book is full of delightful anecdotes and excellent detailed drawings; it will do much to elevate the reputation of Wilson among those with an interest in birds, illustration, and history.
-- D. Flaspohler Choice