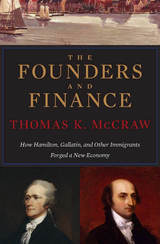 In 1776 the United States government started out on a shoestring and quickly went bankrupt fighting its War of Independence against Britain. At the war’s end, the national government owed tremendous sums to foreign creditors and its own citizens. But lacking the power to tax, it had no means to repay them. The Founders and Finance is the first book to tell the story of how foreign-born financial specialists—immigrants—solved the fiscal crisis and set the United States on a path to long-term economic success.

Pulitzer Prize–winning author Thomas K. McCraw analyzes the skills and worldliness of Alexander Hamilton (from the Danish Virgin Islands), Albert Gallatin (from the Republic of Geneva), and other immigrant founders who guided the nation to prosperity. Their expertise with liquid capital far exceeded that of native-born plantation owners Washington, Jefferson, and Madison, who well understood the management of land and slaves but had only a vague knowledge of financial instruments—currencies, stocks, and bonds. The very rootlessness of America’s immigrant leaders gave them a better understanding of money, credit, and banks, and the way each could be made to serve the public good.

The remarkable financial innovations designed by Hamilton, Gallatin, and other immigrants enabled the United States to control its debts, to pay for the Louisiana Purchase of 1803, and—barely—to fight the War of 1812, which preserved the nation’s hard-won independence from Britain.

REVIEWS
Well told by McCraw are the familiar stories of Hamilton’s consolidation and funding of the public debt, of his incessant fighting with Thomas Jefferson, and of his final duel with Aaron Burr… McCraw shows just how different was Jefferson’s party from the one doing business under the Republican banner today.
-- James Grant Wall Street Journal


As Thomas K. McCraw relates here, America lurched from one financial crisis to another between 1780 and 1840. At many times, it was entirely plausible that the young nation’s financial troubles might disintegrate it… The achievements of Morris, Hamilton, and Gallatin cannot be overstated. They erected America’s ‘basic capitalist framework’ by establishing a steady national currency and loosed gushing wells of both private and public credit. These immigrants also fashioned a system of taxation and collection, tamed the nation’s debt, and fostered the development of a manufacturing economy. And these astonishing achievements came despite ardent political opposition… The lessons of The Founders and Finance are that America’s finances have been far worse than they are today, and that good policies can triumph over political stupidity.
-- Kevin R. Kosar Weekly Standard


We may not know what we are doing with our own public finances, but perhaps we may take some comfort in the fact that the Founders, two centuries ago, did not know what they were doing, either.
-- Gordon Wood New Republic


A detailed account of the financial negotiations that helped underwrite the United States might not strike some readers as inherently gripping fare, but McCraw has made it every bit as interesting as the more standard accounts of battling redcoats. Men like Morris, Gallatin, and Hamilton had enormous potential to become ‘the most dangerous men in the world’ (in fact they did become so, in the eyes of their many enemies), and The Founders and Finance takes us into the heart of their temptations.
-- Steve Donoghue Open Letters Monthly


If you think the current system is a mess, consider the national economy after the American Revolution… A welcome addition to business and financial history, illuminating little-known aspects of the early republic.
-- Kirkus Reviews


Only two men are honored with statues outside the U.S. Treasury building: Alexander Hamilton and Albert Gallatin. McCraw explores their qualities, foibles, achievements, and failures in order to show why both deserve credit for laying the foundations of American governmental finance… McCraw is a talented storyteller. His highly readable and fascinating work portrays the brilliance of Hamilton and Gallatin against the difficulty of their time and is strongly recommended to all readers interested in American and financial history.
-- Lawrence Maxted Library Journal (starred review)


McCraw sheds light on personalities and policies in this overview of the development of early American finance. The newly independent United States ‘had long been bankrupt’; both the fledgling national government and the states were in hock for the War of Independence… Hamilton’s decisive advocacy of a national bank and assumption of state war debts laid the basis for economic expansion and cemented the dominance of federal power. McCraw then turns to Gallatin’s ascendancy in Congress, where in 1796 he denounced the growth in the national debt and decried high military spending. Starting with the still-resonant contrast between the ‘big government’ Hamilton and ‘small government’ Gallatin, McCraw’s wealth of historical data should interest any lay historian, particularly when he presents the many ‘what if’s.’
-- Publishers Weekly


Consistently interesting and beautifully written, McCraw’s narratives of the careers of Hamilton and Gallatin are simply splendid. We are in the hands of a master storyteller, as well as a master analyst of historical materials.
-- Robin Einhorn, University of California, Berkeley


A compulsively readable book that is both a dual biography of the two most influential Treasury Secretaries and a study of American exceptionalism—the way in which immigrants played a leading role in building American institutions.
-- Harold James, author of Making the European Monetary Union


McCraw has observed a singular fact about this nation’s early history: most of the people who directed its finances were immigrants. From Alexander Hamilton to Albert Gallatin, McCraw traces the influence of these remarkable foreign-born financiers, and reveals how their partly-imported sensibilities averted what seemed to be the fledgling republic’s most likely fate: bankruptcy. This is history of the highest order.
-- Roger Lowenstein, author of The End of Wall Street and When Genius Failed


Tom McCraw’s new book is a brilliant account of what the great immigrant financiers accomplished and why their wider-world perspectives became crucial to building the American nation and its economy.
-- Richard Sylla, New York University

TABLE OF CONTENTS
Contents
Introduction
Part I. Alexander Hamilton 1757–1804
1. St. Croix and Trauma
2. New York and Promise
3. War and Heroism
4. Love and Social Status
5. The Roots of His Thinking
6. Robert Morris, Hamilton, and Finance
7. The Constitution
8. New Government, Old Debt
9. The Fight over the Debt
10. The Bank of the United States
11. Diversifying the Economy
12. Tensions and Political Parties
13. The Decline
14. The Duel
Part II. Albert Gallatin 1761–1849
15. Choosing the New World
16. Moving to the West
17. Entering Politics
18. Becoming Jeffersonian
19. The Climb to Power
20. Debt, Armaments, and Louisiana
21. Developing the West
22. Embargo and Frustration
23. Dispiriting Diplomacy
24. The Fate of the Bank
25. Financing the Wayward War
26. Winning the Peace
27. His Long and Useful Life
Part III. The Legacies
28. Immigrant Exceptionalism?
29. Comparisons and Contingencies
30. Capitalism and Credit
31. The Political Economy of Hamilton and Gallatin
Notes
Acknowledgments
Credits
Index