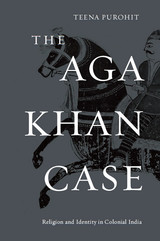 An overwhelmingly Arab-centric perspective dominates the West’s understanding of Islam and leads to a view of this religion as exclusively Middle Eastern and monolithic. Teena Purohit presses for a reorientation that would conceptualize Islam instead as a heterogeneous religion that has found a variety of expressions in local contexts throughout history. The story she tells of an Ismaili community in colonial India illustrates how much more complex Muslim identity is, and always has been, than the media would have us believe.

The Aga Khan Case focuses on a nineteenth-century court case in Bombay that influenced how religious identity was defined in India and subsequently the British Empire. The case arose when a group of Indians known as the Khojas refused to pay tithes to the Aga Khan, a Persian nobleman and hereditary spiritual leader of the Ismailis. The Khojas abided by both Hindu and Muslim customs and did not identify with a single religion prior to the court’s ruling in 1866, when the judge declared them to be converts to Ismaili Islam beholden to the Aga Khan.

In her analysis of the ginans, the religious texts of the Khojas that formed the basis of the judge’s decision, Purohit reveals that the religious practices they describe are not derivations of a Middle Eastern Islam but manifestations of a local vernacular one. Purohit suggests that only when we understand Islam as inseparable from the specific cultural milieus in which it flourishes do we fully grasp the meaning of this global religion.

REVIEWS
Purohit demonstrates admirably how, over the past two centuries, Satpanthi religious complexity has been ironed out into what she would term ‘identitarian religion.’ It is research much enriched by her deep understanding of the gināns…This book is an important contribution to understanding religious change in South Asia.
-- Francis Robinson American Historical Review


Teena Purohit’s book The Aga Khan Case: Religion and Identity in Colonial India develops a critical theme in the study of South Asian Islam, that of its heterogeneity. Despite the attention scholars have devoted to this topic, Islam persists in appearing to be a homogeneous category to many non-specialists. Purohit pushes against prevailing assumptions that Islam can be understood through studies of texts and the Arab world, showing instead how Islam is shaped by specific local contexts…The book engages essential sources for an important discussion of the diversity of South Asian Islam. Purohit’s argument that the Ismaili community was constituted in an Indian context and shaped by both local traditions and Quranic doctrines is valuable, especially in its close attention to the particulars of the case. She offers a model for how scholars might understand identity formation in India, the influence of the categories of colonial modernity and why we should be wary of accepting the assumptions about identity that dominate the religious landscape of the subcontinent today. The Aga Khan Case will prove useful for graduate students—those with a foundation in the history of Islam and/or South Asia, especially—and for students of empire and comparative religions more broadly.
-- Amber H. Abbas Bulletin of the School of Oriental and African Studies


[A] compelling study of the religious practices of Khojas in western India…Purohit’s most important contribution to the field of South Asian religious studies and to the broader field of Islamic studies is her powerful and persuasive analysis of the vernacular Gujarati texts that give us insight into the religious practice of the Khojas…Purohit’s work challenges and provides new insights into the history of the practice of South Asian Islam…The book will, no doubt, appeal to an educated public interested in the global history of Islam, as well as to scholars and students of Islamic studies and South Asian studies.
-- Rama Sundari Mantena History


This is an innovative, conceptually rich, and philologically adept intervention in the overcrowded field of syncretism and 'conversion studies,' the dominant apertures through which the question of Islam in India in historical perspective is usually viewed. Purohit in a welcome move is able to break free of specialisms and focus on a medley of key religious texts.
-- Shahid Amin, University of Delhi


Teena Purohit presents us with a highly original study of the making of sectarian identity in modern India. Very suggestive is her argument about the way in which one such identity, Khoja Ismailism, was created as Muslim by an erasure of messianism as a form of non-identitarian interaction.
-- Faisal Devji, Oxford University

TABLE OF CONTENTS
Contents
Acknowledgments
Note on Transliteration
Introduction
1. Prehistories of the Isma‘ili Sect in Nineteenth-Century Bombay
2. Sectarian Showdown in the Aga Khan Case of 1866
3. Reading Satpanth against the Judicial Archive
4. Comparative Formations of the Hindu Swami Narayan “Sect”
5. Sect and Secularism in the Early Nationalist Period
Conclusion
Notes
Index