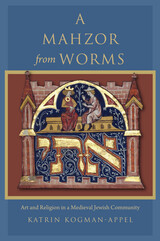 The Leipzig Mahzor is one of the most lavish Hebrew illuminated manuscripts of all time. A prayer book used during Jewish holidays, it was produced in the Middle Ages for the Jewish community of Worms in the German Rhineland. Though Worms was a vibrant center of Judaism in the eleventh and twelfth centuries and drew celebrated rabbis, little is known about the city's Jews in the later Middle Ages. In the pages of its famous book, Katrin Kogman-Appel discovers a portal into the life of this fourteenth-century community.

Medieval mahzorim were used only for special services in the synagogue and "belonged" to the whole congregation, so their visual imagery reflected the local cultural associations and beliefs. The Leipzig Mahzor pays homage to one of Worms's most illustrious scholars, Eleazar ben Judah. Its imagery reveals how his Ashkenazi Pietist worldview and involvement in mysticism shaped the community's religious practice. Kogman-Appel draws attention to the Mahzor's innovations, including its strategy for avoiding visual representation of God and its depiction of customs such as the washing of dishes before Passover, something less common in other mahzorim. In addition to decoding its iconography, Kogman-Appel approaches the manuscript as a ritual object that preserved a sense of identity and cohesion within a community facing a wide range of threats to its stability and security.

REVIEWS
In this meticulously researched book, Kogman-Appel casts new light on the religious concepts, ideas, rituals, and values in 14th-century Worms and in Ashkenaz in general. Her work provides us with historical insights about one of the important Jewish communities of medieval Europe about which we still know too little. We learn how the Jews of Worms 'saw' the Mahzor, how they saw themselves, and how they perceived their community in a time of decline.
-- Shmuel Shepkaru, The University of Oklahoma


Katrin Kogman-Appel has established herself as perhaps the foremost expositor of medieval illuminated Hebrew manuscripts today. Her treatment of the Leipzig Mahzor demonstrates once again that she is a scholar of formidable erudition who peels away the layers of these magnificent manuscripts to reveal the rich complexity of medieval society and the important role that visual culture plays in it.
-- Adam S. Cohen, University of Toronto


An authoritative study of a stunning manuscript, Katrin Kogman-Appel's A Mahzor from Worms illuminates one of the great masterpieces of medieval Hebrew book painting. With great learning and historical imagination, Kogman-Appel unravels the Mahzor's intricate integration of ritual and pietistic practice in Worms, one of the great centers of medieval Ashkenazi culture.
-- Jeffrey Hamburger, Harvard University


A Mahzor from Worms offers a notably learned and thoughtful examination of a fascinating manuscript that has received surprisingly little scholarly attention. Conceptually sophisticated and thoroughly interdisciplinary, it convincingly reads the Mahzor as a kind of self-portrait created by and for the Worms Jewish community. The sensitive analysis reveals a still vibrant but increasingly pressured community struggling to honor sometimes-conflicting traditions and reconcile a proud heritage with contemporary needs. It is a significant contribution to cultural history as well as art history and Judaic Studies.
-- Sara Lipton, State University of New York at Stony Brook