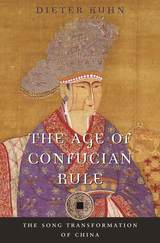 Just over a thousand years ago, the Song dynasty emerged as the most advanced civilization on earth. Within two centuries, China was home to nearly half of all humankind. In this concise history, we learn why the inventiveness of this era has been favorably compared with the European Renaissance, which in many ways the Song transformation surpassed.

With the chaotic dissolution of the Tang dynasty, the old aristocratic families vanished. A new class of scholar-officials—products of a meritocratic examination system—took up the task of reshaping Chinese tradition by adapting the precepts of Confucianism to a rapidly changing world. Through fiscal reforms, these elites liberalized the economy, eased the tax burden, and put paper money into circulation. Their redesigned capitals buzzed with traders, while the education system offered advancement to talented men of modest means. Their rationalist approach led to inventions in printing, shipbuilding, weaving, ceramics manufacture, mining, and agriculture. With a realist’s eye, they studied the natural world and applied their observations in art and science. And with the souls of diplomats, they chose peace over war with the aggressors on their borders. Yet persistent military threats from these nomadic tribes—which the Chinese scorned as their cultural inferiors—redefined China’s understanding of its place in the world and solidified a sense of what it meant to be Chinese.

The Age of Confucian Rule is an essential introduction to this transformative era. “A scholar should congratulate himself that he has been born in such a time” (Zhao Ruyu, 1194).

REVIEWS
[An] admirable account of the Song dynasty...This series on China, brilliantly overseen by Timothy Brook, is a credit to Harvard University Press. Above all, it encourages us to think of China in different ways.
-- Jonathan Mirsky Literary Review


One hopes [Kuhn's] work will find a larger audience, for he has much to teach to general readers, world historians, and China specialists alike.
-- Mark Halperin American Historical Review


The Age of Confucian Rule is a book that everyone who teaches Chinese history should have on his or her shelf and consult frequently...The attention [Kuhn] gives material culture is refreshing and helps him to make his case for the importance of China in Song times.
-- Patricia Ebrey International Journal of Asian Studies


The first four chapters of this well-researched, clearly written book present a balanced synopsis of the political, institutional, and military history of Song and its neighbors during some three centuries, when this was 'the most advanced civilization on earth.' The remaining eight chapters deal with thought, life cycle rituals, poetry and painting, education and the examination system, dynastic capitals, the world of production, money and taxation, private lives, and the public sphere. The author's enthusiasm is matched by his erudition and outstanding expertise in Song material culture as he ranges widely from the plethora of goods for sale in bustling shops and markets to the origins of foot binding, and finds space for dental hygiene as well as tomb construction...Scholars already versed in the period can learn much from this book, while those just beginning to delve into Chinese history are very well served.
-- C. Schirokauer Choice


One of the leading historians of the Song period offers an empirically rich and well-informed book that is especially good on material culture and the history of technology. Kuhn offers strong overviews of the transformation of the capital cities, education and examination, commerce, and the Song fiscal system, as well as lively discussions of religious beliefs, the study of natural phenomena, and private life in the public sphere. For readers who want an in-depth look at mid-imperial Chinese history and culture, Dieter Kuhn's Age of Confucian Rule promises to become the book of choice.
-- Paul Jakov Smith, Haverford College