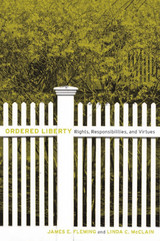 Many have argued in recent years that the U.S. constitutional system exalts individual rights over responsibilities, virtues, and the common good. Answering the charges against liberal theories of rights, James Fleming and Linda McClain develop and defend a civic liberalism that takes responsibilities and virtues—as well as rights—seriously. They provide an account of ordered liberty that protects basic liberties stringently, but not absolutely, and permits government to encourage responsibility and inculcate civic virtues without sacrificing personal autonomy to collective determination.

The battle over same-sex marriage is one of many current controversies the authors use to defend their understanding of the relationship among rights, responsibilities, and virtues. Against accusations that same-sex marriage severs the rights of marriage from responsible sexuality, procreation, and parenthood, they argue that same-sex couples seek the same rights, responsibilities, and goods of civil marriage that opposite-sex couples pursue. Securing their right to marry respects individual autonomy while also promoting moral goods and virtues. Other issues to which they apply their idea of civic liberalism include reproductive freedom, the proper roles and regulation of civil society and the family, the education of children, and clashes between First Amendment freedoms (of association and religion) and antidiscrimination law. Articulating common ground between liberalism and its critics, Fleming and McClain develop an account of responsibilities and virtues that appreciates the value of diversity in our morally pluralistic constitutional democracy.

REVIEWS
In this robust defense of political liberalism, James Fleming and Linda McClain argue that protecting rights and promoting personal responsibility are not in conflict. Both state and civil society should help people learn how to govern themselves, respect each other, and develop their own moral capacities. This is an important book that moves beyond old debates about rights and addresses the problems of pluralism in the twenty-first century.
-- Jack M. Balkin, Yale Law School


Fleming and McClain defend principles, policies, and institutions designed to form responsible citizens. They affirm that parents, government, and civil society, including religious institutions, share the responsibility for fostering capacities for democratic and personal self-government. Learned, balanced, humane, and clear, this book epitomizes the virtues of that reasonable constitutional liberalism that Americans should count among their proudest achievements.
-- Stephen Macedo, Princeton University


Ordered Liberty provides a novel exploration of the relation between First Amendment rights of conscience and the Fourteenth's rights of equality, a valuable discussion of the relative duties, rights and powers of parents and states for the education of children, and rich and original defenses of a woman's right and responsibility to decide on the course of a pregnancy, and a same-sex couple's decision to marry. The authors deepen our understanding of what liberal constitutionalism requires of us as well as the rights it accords us as citizens of law's empire.
-- Robin L. West, Georgetown University Law Center


Numerous theorists have claimed that liberal rights come at the expense of individual responsibility and that liberal autonomy fosters indifference to civic virtue. In this important response, James Fleming and Linda McClain argue that contemporary liberalism not only accommodates but also requires both responsibility and virtue. Political liberalism is a form of ordered liberty, not an alternative to it.
-- William A. Galston, The Brookings Institution


Engage[s] with important and popular contemporary philosophical and theoretical positions in the liberalism literature on liberalism, from Michael Sandel on one side to Cass Sunstein on another…In bringing together many strands critical in the questioning of liberal orthodoxies, engaging in spirit with a broad range of theorists and philosophers and applying their theory in an illuminating way to current constitutional questions, Fleming and McClain introduce the interested reader to an important conversation and jog us out of old, unthinking habits.
-- Ekow Yankah Jotwell


Critics of liberalism--including communitarians, civic republicans, and progressives--charge that the American constitutional order, and the liberal theories of rights on which it is based, idolize individual rights while marginalizing personal responsibility, civic virtue, and the welfare of the community. In this new work, Professors James Fleming and Linda McClain respond to these critics by developing a liberal account of rights in which responsibility and virtue also play a role. Government may properly encourage citizens to make socially responsible decisions, to participate in democratic self-government, and to live virtuously--but it may not compel citizens to sacrifice the core of their personal autonomy. Fleming and McClain illustrate the interplay of rights, responsibilities, and virtues by exploring such timely issues as same-sex marriage, abortion, education, assisted suicide, religious institutions’ discriminatory practices, and hate speech. They consider, in particular, cases in which the Supreme Court and lower federal courts have determined the extent of government power in these fields, and they discuss how judges committed to ordered liberty might approach the same questions. Ordered Liberty thus offers readers a lively and readable synthesis of political theory, legal philosophy, and constitutional interpretation.
-- Harvard Law Review