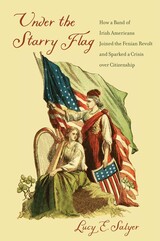 “A stunning accomplishment…As the Trump administration works to expatriate naturalized U.S. citizens, understanding the history of individual rights and state power at the heart of Under the Starry Flag could not be more important.”
—Passport

In 1867 forty Irish American freedom fighters, outfitted with guns and ammunition, sailed to Ireland to join the effort to end British rule. They were arrested for treason as soon as they landed. The Fenians, as they were called, claimed to be American citizens, but British authorities insisted that they remained British subjects. Following the Civil War, the Fenian crisis dramatized the question of whether citizenship should be considered an inalienable right.

This gripping legal saga, a prelude to today’s immigration battles, raises important questions about immigration, citizenship, and who deserves to be protected by the law.

REVIEWS
A stunning accomplishment…As the Trump administration works to expatriate naturalized U.S. citizens, understanding the history of individual rights and state power at the heart of Under the Starry Flag could not be more important…Salyer’s work on expatriation recalls a different time, when the U.S. government worked hard to protect and reinforce the rights of immigrants in the United States and those that became U.S. citizens.
-- Torrie Hester Passport


Under the Starry Flag is a brilliant piece of historical writing as well as a real page-turner. Salyer seamlessly integrates analysis of big, complicated historical questions—allegiance, naturalization, citizenship, politics, diplomacy, race, and gender—into a gripping narrative.
-- Kevin Kenny, author of The American Irish: A History


Salyer offers a compelling account of how the right of expatriation won recognition during the second half of the nineteenth century through the efforts of immigrants themselves, and then gestures at the darker story of how the U.S. government wielded expatriation against both native-born and naturalized citizens in the twentieth century, often to devastating effect.
-- Kunal Parker, author of Making Foreigners: Immigration and Citizenship Law in America, 1600–2000


Under the Starry Flag is a beautifully written account of the Irish Americans who fought for Ireland’s freedom in the 1860s and for their protection, as naturalized U.S. citizens, from British prosecution. Irish freedom fighters, the Civil War and slave emancipation, the color line in American law, and international relations—all told by Lucy Salyer with elegance, drama, and erudition.
-- Mae Ngai, author of Impossible Subjects: Illegal Aliens and the Making of Modern America


Beautifully crafted and compelling, Lucy Salyer’s illuminating narrative of Irish American freedom fighters is a reminder of the pathos and passion in the history of citizenship. Highly recommended.
-- Mary Dudziak, author of War Time: An Idea, Its History, Its Consequences


Do individuals have an inherent right to change their national allegiance? Are naturalized citizens the equal of birthright citizens? What power do sovereign states wield in a world of nation-states? Salyer gives us a history of expatriation in the era of Reconstruction that is both a riveting story and a brilliant contribution to our understanding of citizenship.
-- Barbara Young Welke, author of Law and the Borders of Belonging in the Long Nineteenth Century United States

TABLE OF CONTENTS
Cover
Title Page
Copyright
Dedication
Contents
Prologue: Erin’s Hope and the Forgotten Right of Expatriation
Part One: The Fenians and the Making of a Crisis
1. Clonakilty, God Help Us!
2. Exiles and Expatriates
3. The Fenian Pest
4. Civis Americanus Sum
Part Two: Citizenship on Trial
5. A Floating Rebellion
6. The Voice from the Dungeon
7. All the World’s a Stage
Part Three: Reconstructing Citizenship
8. Are Naturalized Americans, Americans?
9. This Is a White Man’s Government!
10. The Politics of Expatriation
11. Private Diplomatizing
12. Treating Expatriation
Epilogue: Exits
Notes
Acknowledgments
Credits
Index