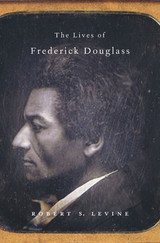 Frederick Douglass’s fluid, changeable sense of his own life story is reflected in the many conflicting accounts he gave of key events and relationships during his journey from slavery to freedom. Nevertheless, when these differing self-presentations are put side by side and consideration is given individually to their rhetorical strategies and historical moment, what emerges is a fascinating collage of Robert S. Levine’s elusive subject. The Lives of Frederick Douglass is revisionist biography at its best, offering new perspectives on Douglass the social reformer, orator, and writer.

Out of print for a hundred years when it was reissued in 1960, The Narrative of the Life of Frederick Douglass (1845) has since become part of the canon of American literature and the primary lens through which scholars see Douglass’s life and work. Levine argues that the disproportionate attention paid to the Narrative has distorted Douglass’s larger autobiographical project. The Lives of Frederick Douglass focuses on a wide range of writings from the 1840s to the 1890s, particularly the neglected Life and Times of Frederick Douglass (1881, 1892), revised and expanded only three years before Douglass’s death. Levine provides fresh insights into Douglass’s relationships with John Brown, Abraham Lincoln, William Lloyd Garrison, and his former slave master Thomas Auld, and highlights Douglass’s evolving positions on race, violence, and nation. Levine’s portrait reveals that Douglass could be every bit as pragmatic as Lincoln—of whom he was sometimes fiercely critical—when it came to promoting his own work and goals.

REVIEWS
[A] thoughtful, ground-setting book… Levine scrutinizes not merely the times and the life-circumstances surrounding the generation of [the] three very different accounts Douglass wrote of himself but also the texts themselves, the tectonic changes running underneath them. It’s a sustained performance of first-rate literary analysis on Levine’s part.
-- Steve Donoghue Open Letters Monthly


Over the course of his life (1818–1895), Douglass published three autobiographies, continually revising and restructuring his life story as an ex-slave. Yet he is read and celebrated mostly for his first, The Narrative of the Life of Frederick Douglass, published in 1845 under the aegis of William Lloyd Garrison’s Massachusetts Anti-Slavery Society. In this finely delineated look at Douglass’ writing, Levine urges new readings of his subject’s other autobiographical works, as well as his 1853 novella, The Heroic Slave, in order to grasp a fuller understanding of how Douglass came into his own and began to move away from Garrison’s ‘moral suasion’ to an advocacy of black militancy and beyond… Levine’s exploration of the character of Madison Washington in The Heroic Slave as Douglass’ alter ego and his views of John Brown and President Abraham Lincoln are especially elucidating. An astute, thorough literary study that will invite fresh readings of Douglass’ writing.
-- Kirkus Reviews


Levine offers a fascinating study of the most famous African American of the mid-19th century.
-- Patricia Ann Owens Library Journal


A groundbreaking work of revisionary biography that reveals Douglass as a canny writer far ahead of his time.
-- John Stauffer, Harvard University


This is a richly detailed and nuanced portrait of the artist and social reformer as a ‘compulsive revisionist.’ Impressive in its reach and scope.
-- Robert Stepto, Yale University


Levine is very good at showing how Douglass modulated the stories he told about his life and times in order to serve his political and personal purpose of the moment.
-- Andrew Delbanco New York Review of Books


Show[s] how Douglass’ attention to his self-representation predates our modern malleability, and was part and parcel to his becoming one of the most famous and influential Americans of the 19th Century…Levine clearly shows how Douglass amplified some parts of his life and de-emphasized others in his writings and speeches as his views and purposes evolved over time.
-- Mark Reynolds PopMatters


The Lives of Frederick Douglass offers us welcome insights into Douglass’s powers of combination and a compelling reason to refocus some of our attention from the first Narrative to the rest of his remarkable and remarkably embattled career.
-- John Michael American Literary History


Pay[s] tribute to Douglass’s immense literary talents…His was one of the most remarkable and revolutionary lives of the 19th century, and he did not shy from writing about it…Levine’s book, which takes [his] autobiographies as its primary subject, retraces Douglass’s lifelong effort to tell and retell his own astonishing story…As Levine shows, even his autobiographies were chiefly political documents. They were less concerned with exploring his private identity in formation than with exposing public crimes and inspiring a mass movement against them.
-- Matt Karp The Nation


[An] inspirational study…Levine’s approach is groundbreaking…Breaking new and difficult ground, he examines the ‘productive role’ played by William Lloyd Garrison ‘and his antislavery society’ in the construction of Douglass’s Narrative. Adopting a scholarly decision that is not without risk, Levine succeeds in extrapolating the tangled skeins of black–white influence and exchange that were in evidence during the abolitionist era. He meticulously navigates this complex and unequal terrain with the result that he does a powerful job not of detracting from but of reinforcing Douglass’s agency and artistry. More particularly, Levine’s exemplary close readings trace Douglass’s ‘skill in negotiating his situation’ and ‘new ways of telling his life story’ in invaluable ways. He provides an indispensable blueprint for scholars by newly mapping the indivisible yet under-researched power dynamics at work within antislavery networks as characterized by competing forms of oratorical performance, epistolary prowess, political proselytizing, and authorial self-construction. Levine’s indefatigable examination of Douglass’s syntax and spelling in his private writings adds grist to his mill that figures such as Garrison had an important, if repeatedly misconstrued, role to play in Douglass’s formative stages as a writer. As he is careful to argue, this was a role that in no way minimizes Douglass’s own virtuosity as an orator, performer, and author…[A] pioneering volume.
-- Celeste-Marie Bernier Slavery & Abolition


Through his critical analysis of what Levine describes as Douglass’s autobiographical project, Levine looks to Douglass’s evolving ideas of race, violence, and abolitionism and advances insights into Douglass as a writer and as a social reformer…Levine’s The Lives of Frederick Douglass provides a detailed look at the choices Douglass made when he sat down to write, yielding a clearer picture of the man as a writer and reformer while also evoking questions that invite further scholarship on Douglass. Levine’s book will interest those seeking to understand the intellectual life of Douglass and more fully appreciate Douglass’s political acumen.
-- Jonathan Lande Civil War Book Review

TABLE OF CONTENTS
Cover
Title
Copyright
Dedication
Contents
Introduction: Lives after the Narrative
Chapter 1. The Massachusetts Anti-Slavery Society Narrative
Douglass’s Writing Workshop
Black and White Envelope
The Fruit of Abolition
$2.75 Per Dozen
Chapter 2. Taking Back the Narrative: The Dublin Editions
The Cambria Riot
The Books Go off Grandly
The Second Dublin Edition
A Narrative of his Previous Life
Chapter 3. Heroic Slaves: Madison Washington and My Bondage and My Freedom
The Spirit of Freedom
Their Heroic Chief and Deliverer
The Black Man and the Brotherhood
The Tillman Argument
Chapter 4. Tales of Abraham Lincoln (and John Brown)
A Noble, Heroic, and Christian Martyr
Evil by Choice, Right from Necessity
Lincoln’s Tale of Douglass
The White Man’s President
Chapter 5. Thomas Auld and the Reunion Narrative
A Very Mean Man
The Daughter of the Owner of a Slave
A Sort of Final Settlement of Past Differences
Dear Captain Auld
Epilogue: Posthumous Douglass
Notes
Acknowledgments
Index