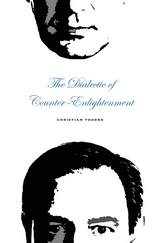 In this wide-ranging, ambitious, and engaging study, Christian Thorne confronts the history and enduring legacy of anti-foundationalist thought.

Anti-foundationalism—the skeptical line of thought that contends our beliefs cannot be authoritatively grounded and that most of what passes for knowledge is a sham—has become one of the dominant positions in contemporary criticism. Thorne argues that despite its ascendance, anti-foundationalism is wrong. In The Dialectic of Counter-Enlightenment, he uses deft readings of a range of texts to offer new perspectives on the ongoing clash between philosophy and comprehensive doubt.

The problem with anti-foundationalism is not, as is often thought, that it radiates uncertainty or will unglue the university, but instead that it is a system of thought—with set habits that generate unearned certainties. The shelves are full of histories of modern philosophy, but the history of the resistance to philosophical thought remains to be told. At its heart, The Dialectic of Counter-Enlightenment is a plea not to take doubt at its word—a plea for the return of a vanished philosophical intelligence and for the retirement of an anti-Enlightenment thinking that commits, over and over again, the very crimes that it lays at Enlightenment’s door.

REVIEWS
This provocative, highly original book masterfully reverses received views on skepticism's role in history and, in consequence, raises probing questions about the continued position of skepticism at the heart of contemporary criticism. Although thoughtful and carefully contextualized, Thorne's claims are delivered with the wit and sense of repartee of a brilliant conversationalist, almost as if Samuel Johnson were resurrected to join the fray of post-theory debates.
-- George Hoffmann, University of Michigan


Thorne raises a question about the history and enduring legacy of anti-foundationalist thought with broad implications for the entire field of literary studies, and he tells a story that is compelling and wide-ranging. Each of his chapters is rich enough to be somebody else's book. The Dialectic of Counter-Enlightenment reminds us that literary studies matter: this field can illuminate the very biggest questions, in this case the very form and future of thought itself.
-- Helen Deutsch, University of California, Los Angeles


Christian Thorne's delightful and stimulating The Dialectic of Counter-Enlightenment manages a stunning achievement. You begin reading in the presence of such an engaging and encouraging narrative voice that you feel as if you are negotiating the trickiest Adornian turns without training wheels, only to realize, as the argument twists and soars, that you have been strapped into the Batmobile all along. The stakes of the book are prodigious: a careful and devastating conceptual-historical critique of the political confidence of poststructuralist anti-foundationalism, secure in its leftish effects. Not so fast, warns Thorne: anti-foundationalism can support right-leaning towers as well as left-leaning ones. It comes with no guarantees. Beginning with a primer on classical skepticism, Thorne wrenches it face to face with the emergence of "modern" epistemology in the European sixteenth and seventeenth century, a push-me, pull-you era of "scientific skepticism" and "natural philosophy" waging war on the very principles that are typically taken to be modernity's raison d'être. This is the Dialectic of Enlightenment through the looking glass. However sure you are of your take on Montaigne, the emergence of utopian literature, seventeenth century theater, Hobbes, eighteenth century satire or the rise of the novel, this book will unsettle it. You might not always agree, but you will surely see European modernity fresh and new, and view the poststructuralist ascendancy from a clarifyingly-disorienting perspective. Urgent and compelling, Thorne's book tempers the melancholy aspect of negative dialectic by asserting its shimmering utopian promise.
-- Crystal L. Bartolovich, Syracuse University


An important work of criticism that makes crucial points about skepticism (which can be construed as a lack of belief in the possibility of universal rational agreement) and its ties to regressive politics...This is an important discussion of pre-Enlightenment opponents of enlightenment, of those who wanted to stand pat all in the defense of standing pat with the king or tyrant we know (whether devil or not), rather than either following the demands of philosophy or embracing egalitarianism. And it is flat out entertaining, to boot.
-- Robert Moore PopMatters.com