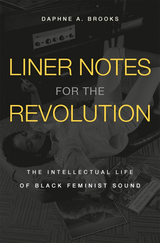 “Brooks traces all kinds of lines, finding unexpected points of connection…inviting voices to talk to one another, seeing what different perspectives can offer, opening up new ways of looking and listening by tracing lineages and calling for more space.”
—New York Times

An award-winning Black feminist music critic takes us on an epic journey through radical sound from Bessie Smith to Beyoncé.

Daphne A. Brooks explores more than a century of music archives to examine the critics, collectors, and listeners who have determined perceptions of Black women on stage and in the recording studio. How is it possible, she asks, that iconic artists such as Aretha Franklin and Beyoncé exist simultaneously at the center and on the fringe of the culture industry?

Liner Notes for the Revolution offers a startling new perspective on these acclaimed figures—a perspective informed by the overlooked contributions of other Black women concerned with the work of their musical peers. Zora Neale Hurston appears as a sound archivist and a performer, Lorraine Hansberry as a queer Black feminist critic of modern culture, and Pauline Hopkins as America’s first Black female cultural commentator. Brooks tackles the complicated racial politics of blues music recording, song collecting, and rock and roll criticism. She makes lyrical forays into the blues pioneers Bessie Smith and Mamie Smith, as well as fans who became critics, like the record-label entrepreneur and writer Rosetta Reitz. In the twenty-first century, pop superstar Janelle Monae’s liner notes are recognized for their innovations, while celebrated singers Cécile McLorin Salvant, Rhiannon Giddens, and Valerie June take their place as cultural historians.

With an innovative perspective on the story of Black women in popular music—and who should rightly tell it—Liner Notes for the Revolution pioneers a long overdue recognition and celebration of Black women musicians as radical intellectuals.

REVIEWS
Brooks traces all kinds of lines, finding unexpected points of connection…inviting voices to talk to one another, seeing what different perspectives can offer, opening up new ways of looking and listening by tracing lineages and calling for more space.
-- New York Times


Daphne Brooks has written a gloriously polyphonic book. Moving through the tumult of the twentieth century and the millennium, she scores, archives, and curates the history of Black woman musicians and their radical modernities, all created in a culture that presumed they had no voices or minds. What did they do to be so Black, brilliant, and blue? Listen. And read on.
-- Margo Jefferson, author of the National Book Critics Circle Award–winning Negroland


Brooks takes on a wide-ranging study of Black female artists, from elders like Bessie Smith and Ethel Waters to Beyoncé and Janelle Monáe. But she reaches far beyond music, exploring writers like Zora Neale Hurston and Pauline Hopkins…Liner Notes is a secret history in the spirit of Greil Marcus, connecting the sonic worlds of Black female mythmakers and truth-tellers.
-- Rob Sheffield Rolling Stone


Brooks moves deftly between eras, from early-twentieth-century blues and vaudeville to Lemonade-era Beyoncé…In articulating the intellectual labor of so many Black women artists—unknown, ‘undertheorized,’ or both—she implicitly acknowledges those who, for whatever reason, didn’t make it into the capital-A archive, but whose contributions surround us nonetheless…Liner Notes is a loud warning shot: seeing Black women everywhere is not the same as seeing Black women.
-- Rawiya Kameir Bookforum


Takes on the weighty task of sifting through more than a century’s worth of music history, cultural criticism and long forgotten archives to explore the revolutionary practices of Black women musicians…Brooks is effusive in her belief that not only did these women exist in spaces previously thought to be exclusively white, she suggests their impact can be felt in all spheres of music today.
-- Stephanie Phillips The Wire


A passionate book, written with a vigorous confidence…Brooks’s command of history and her reading are broad and deep…Instinct says there is a large audience that is not only sympathetic to what she has to say but would be charged up by Brooks’s ideas, that would hear in the music what Brooks hears.
-- George Grella Brooklyn Rail


Daphne Brooks’s brilliant evocation of what gets lost when women of color don’t speak, let alone sing, is one of the most moving testaments to the power of silence, and what breaking that silence means, that I have ever read. Vivid, joyful, and heartbreaking in its passionate understanding of soul in all its manifestations, Liner Notes for the Revolution is itself a new kind of music: propulsive, witty, wise, and true.
-- Hilton Als, author of White Girls


For Daphne Brooks, black feminist sound is sensuous thought. In Liner Notes for the Revolution, she feels and shows and says this with such devotion, such critical and emotional intelligence, such archival commitment and dexterity, and such urgent social aspiration that listening itself is new again.
-- Fred Moten, author of All That Beauty


Liner Notes for the Revolution is a groundbreaking and breathtaking volume from one of our leading cultural historians that will forever change the way we write and think about American culture. Daphne Brooks insists upon the genius of Black women music-makers, listeners, and critics. This transformative work of intellectual generosity is sure to join the ranks of classic works such as Amiri Baraka’s Blues People and Greil Marcus’s Lipstick Traces.
-- Farah Jasmine Griffin, author of Harlem Nocturne


It went so many unexpected places and it fed me. I was especially drawn to the under-told stories of trailblazing women who were the collectors, archivists, and storytellers. She’s made what has been in the shadows legible. It’s full of stories of creative resistance and persistence. Perfect for this moment.
-- Los Angeles Times


A sweeping survey of Black women’s contributions to music history and a rigorous mapping of their lives as intellectuals. From Bessie Smith to Beyoncé…A positively revolutionary ‘critical re-attunement.’
-- Pitchfork


Enlightening…a fresh perspective on more than a century’s worth of Black female musicians…Brooks combines an impressive archive of musical works and the artists’ own words to convincingly reveal how they each impacted popular culture. Music aficionados should take note.
-- Publishers Weekly


A spirited study of how Black women musicians and writers have informed each other despite gatekeepers’ neglect and dismissals…A sui generis and essential work on Black music culture destined to launch future investigations.
-- Kirkus Reviews (starred review)


A lyrical masterpiece that takes readers on an exhilarating journey through a century of Black sound from Bessie Smith to Beyoncé…Brooks’ liner notes are a ‘requiem’ for the oversight of Black women musicians and their intellectual resonance.
-- New Books Network

TABLE OF CONTENTS
Cover
Title Page
Copyright
Dedication
Contents
Author’s Note
Introduction
Side A
1. Toward a Black Feminist Intellectual Tradition in Sound
2. “Sister, Can You Line It Out?”: Zora Neale Hurston Notes the Sound
3. Blues Feminist Lingua Franca: Rosetta Reitz Rewrites the Record
4. Thrice Militant Music Criticism: Ellen Willis & Lorraine Hansberry’s What Might Be
Side B
5. Not Fade Away: Looking After Geeshie & Elvie / L. V
6. “If You Should Lose Me”: Of Trunks & Record Shops & Black Girl Ephemera
7. “See My Face from the Other Side”: Catching Up with Geeshie and L. V.
8. “Slow Fade to Black”: Black Women Archivists Remix the Sounds
Epilogue: Going to the Territory
Notes
Acknowledgments
Credits
Index