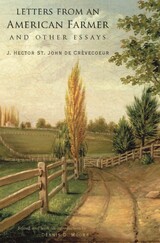 Letters from an American Farmer was published in London in 1782, just as the idea of an “American” was becoming a reality. Those epistolary essays introduced the European public to America’s landscape and customs and have since served as the iconic description of a then-new people. Dennis D. Moore’s convenient, up-to-date reader’s edition situates those twelve pieces from the 1782 Letters in the context of thirteen other essays representative of Crèvecoeur’s writings in English.

The “American Farmer” of the title is Crèvecoeur’s fictional persona Farmer James, a bumpkin from rural Pennsylvania. In his Introduction to this edition, Moore places this self-effacing pose in perspective and charts Crèvecoeur’s enterprising approach to self-promotion, which involved repackaging and adapting his writings for French and English audiences.

Born in Normandy, Crèvecoeur came to New York in the 1750s by way of England and then Canada, traveled throughout the colonies as a surveyor and trader, and was naturalized in 1765. The pieces he included in the 1782 Letters map a shift from hopefulness to disillusionment: its opening selections offer America as a utopian haven from European restrictions on personal liberty and material advancement but give way to portrayals of a land plagued by the horrors of slavery, the threat of Indian raids, and revolutionary unrest. This new edition opens up a broader perspective on this artful, ambitious writer and cosmopolitan thinker who coined America’s most enduring metaphor: a place where “individuals of all nations are melted into a new race of men.”

REVIEWS
No one has better stated what Americans have most wanted to believe about themselves and their society. Crèvecoeur seems especially persuasive because he claimed to be a common American farmer--a pose rendered plausible by his richly detailed and affectionate descriptions of nature and rural work. But Crèvecoeur was no mere celebrator of American materialism. He understood that abundance could corrupt as well as liberate. Nor was he any champion of rugged individualism. He regarded social bonds as essential to sustained prosperity in the new land... No champion of competitive individualism, Crèvecoeur regarded unity, mutuality, sociability, and equality as essential to healthy communities and their families... Crèvecoeur concluded that American abundance did not automatically lead to American freedom and equality... Most readers know Crèvecoeur only from his famous third letter with its sunny optimism. That selective reading creates a misleading impression of his entire work, which ripens into a long expose of the American Revolution as brutal, divisive, and hypocritical. Often misread as a champion of American independence and democracy, Crèvecoeur instead mourned the demise of British America. In its full arc, Letters reveals a descent into political madness: it better resembles Heart of Darkness than Rebecca of Sunnybrook Farm.


Moore has compiled a more complete, authoritative collection of the works of French-born, naturalized American writer J. Hector St. John de Crèvecoeur than has heretofore been available...This collection offers the 12 letters originally included in the 1782 and 1783 London editions of Letters from an American Farmer, five of Crèvecoeur's essays that were never published until1995, and eight other short works. Moore provides a wide-ranging introduction in which he describes in broad strokes the ways in which the newly appended essays may affect an understanding of Crèvecoeur and his literary goals. Overall, the additional essays provide an illuminating context in which to read Crèvecoeur's major work.


Dennis Moore's new edition of the writings of J. Hector St. John de Crèvecoeur makes available, for the first time to the wider public, both canonical and less well-known archival materials by this classic and foundational early American author. The result is a Crèvecoeur who is notable less for his provincial agrarianism and more for a cosmopolitanism that is deeply engaged with the global implications of the American hemisphere in world history and literature. Moore's introduction and edition are both scholastically impeccable and immensely readable, making this book useful for teaching and invaluable to scholarship.
-- Ralph Bauer, University of Maryland


Moore's edition supplants earlier versions of this foundational early American text. Moore's graceful introduction deftly weaves together both traditional and emergent interpretations of Crèvecoeur, and his selection of an additional 13 essays further serves to open up new interpretive horizons and critical possibilities. Scholars of early American culture will find much to admire in this thought-provoking edition, and--without question--their students will find it an engaging and invaluable resource.
-- Duncan Faherty, Queens College and the CUNY Graduate Center


With the help of Moore's clear, insightful introduction and the inclusion of 13 additional letters, we find in this new edition a Crèvecoeur who is deeply enmeshed in the eighteenth-century Atlantic world, and who is self-conscious about his literary aspirations; we find a Farmer James whose voice becomes more distinctive and more compelling alongside a larger set of narrators; and we find a text that is far more ambitious, more poignant, and more complex than we have been reading to date. This edition will quickly become a standard for both students and scholars of early America.
-- Cristobal Silva, Columbia University

TABLE OF CONTENTS
Contents
Introduction: Moving Beyond “The Farmer of Feelings”
A Note on Crèvecoeur’s Text and on Emendations
Letter I. Introductory Letter
Letter II. Thoughts, Feelings and Pleasures of an American Farmer
Letter III. What Is an American?
Letter IV. Description of the Island of Nantucket, with the Manners, Customs, Policy and Trade of the Inhabitants
Letter V. Customary Education and Employment of the Inhabitants of Nantucket
Letter VI. Description of the Island of Martha’s Vineyard and of the Whale-Fishery
Letter VII. Manners and Customs at Nantucket
Letter VIII. Peculiar Customs at Nantucket
Letter IX. Description of Charles-Town; Thoughts on Slavery; on Physical Evil; a Melancholy Scene
Letter X. On Snakes; and on the Humming-Bird
Letter XI. From Mr. Iw-nAl-z, a Russian Gentleman; Describing the Visit He Paid at My Request to Mr. John Bertram, the Celebrated Pennsylvanian Botanist
Letter XII. Distresses of a Frontier Man
A Happy Family Disunited by the Spirit of Civil War
Rock of Lisbon
Sketches of Jamaica and Bermudas and Other Subjects
The Commissioners
Ingratitude Rewarded
Susquehannah
The Grotto
Hospitals
A Sketch of the Contrast between the Spanish and the English Colonies
A Snow-Storm as It Affects the American Farmer
The Frontier Woman
History of Mrs. B.
The Man of Sorrow
Suggestions for Further Reading
Acknowledgments
Index