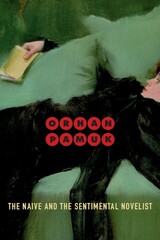 The Naive and the Sentimental Novelist
by Orhan Pamuk and Nazim Dikbaş
Harvard University Press, 2010
Cloth: 978-0-674-05076-1
Nobel prize winning Orhan Pamuk takes us on a journey into the worlds of readers and writers through the lens of his own life. Pamuk’s very personal, autobiographical stories explain how he came to reading and writing. As someone who started out as a painter in his early twenties, Pamuk approaches his discussion of the novel with a strong visual sense. Explaining that readers and writers need to be both naïve and sentimental, he looks back to his early years and the varied works that inspired him, including writers such as Tolstoy, Dostoevsky, Stendhal, Flaubert, Proust, Mann, and Naipaul.
TABLE OF CONTENTS
Contents
1. What Our Minds Do When We Read Novels
2. Mr. Pamuk, Did All This Really Happen To You?
3. Literary Character, Plot, Time
4. Words, Pictures, Objects
5. Museums and Novels
6. The Center
Epilogue
Index