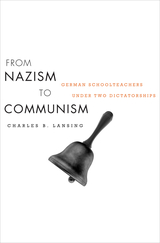 Tracing teachers' experiences in the Third Reich and East Germany, Charles Lansing analyzes developments in education of crucial importance to both dictatorships. Lansing uses the town of Brandenburg an der Havel as a case study to examine ideological reeducation projects requiring the full mobilization of the schools and the active participation of a transformed teaching staff. Although lesson plans were easily changed, skilled teachers were neither quickly made nor easily substituted. The men and women charged in the postwar era with educating a new “antifascist” generation were, to a surprising degree, the same individuals who had worked to “Nazify” pupils in the Third Reich. But significant discontinuities existed as well, especially regarding the teachers' professional self-understanding and attitudes toward the state-sanctioned teachers' union. The mixture of continuities and discontinuities helped to stabilize the early GDR as it faced its first major crisis in the uprising of June 17, 1953.

This uniquely comparative work sheds new light on an essential story as it reconceptualizes the traditional periodization of postwar German and European history.

REVIEWS
A compelling study that makes an original contribution. Lansing presents an intriguing local case, the industrial city of Brandenburg an der Havel, which allows him to probe the interaction of the district administration with the citywide teaching staff, individual schools, and specific teachers. This is a considerable advance in the literature, which has so far mostly been confined to the national level. Through this case study Lansing portrays a more graphic view of how dictatorships work or fail to work on the local level.
-- Konrad H. Jarausch, University of North Carolina


Lansing takes a fascinating subject--how two German totalitarian regimes tried to transform the teaching bodies they inherited from previous regimes--and shows the degree to which both regimes were forced to compromise and restrict their ambitions for making large scale changes. This is the only book that traces the transformations--from republican through Nazi and Communist rule--in a single town, a unique perspective that provides valuable insight into shifts in political and academic culture at the local level. The material is fresh, the arguments original, the writing clear. This is an important, even pioneering, work of German and European history.
-- John Connelly, University of California, Berkeley