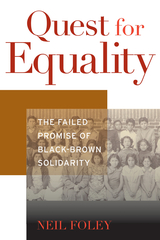 As the United States championed principles of freedom and equality during World War II, it denied fundamental rights to many non-white citizens. In the wake of President Franklin Roosevelt's "Good Neighbor" policy with Latin America, African American and Mexican American civil rights leaders sought ways to make that policy of respect and mutual obligations apply at home as well as abroad. They argued that a whites-only democracy not only denied constitutional protection to every citizen but also threatened the war effort and FDR's aims.

Neil Foley examines the complex interplay among regional, national, and international politics that plagued the efforts of Mexican Americans and African Americans to find common ground in ending employment discrimination in the defense industries and school segregation in the war years and beyond. Underlying differences in organizational strength, political affiliation, class position, and level of assimilation complicated efforts by Mexican and black Americans to forge strategic alliances in their fight for economic and educational equality. The prospect of interracial cooperation foundered as Mexican American civil rights leaders saw little to gain and much to lose in joining hands with African Americans.

Over a half century later, African American and Latino civil rights organizations continue to seek solutions to relevant issues, including the persistence of de facto segregation in our public schools and the widening gap in wealth and income in America. Yet they continue to grapple with the difficulty of forging solidarity across lines of cultural, class, and racial-ethnic difference, a struggle that remains central to contemporary American life.

REVIEWS
This is a brave book. Neil Foley is as astute and clear-eyed an analyst of race as anyone in this country, and this sobering account of Mexican American and African American attempts at civil rights solidarity demonstrates how ultimately the two groups were not in the fight together.
-- Richard White, Stanford University


In this provocative and pathbreaking study, Neil Foley looks beyond the borders of the U.S. to understand the racial and political calculus of Latinos and African Americans in their early civil rights struggles. Quest for Equality is essential reading for all interested in the transnational, Cold War politics of race relations in the U.S.
-- Henry Louis Gates, Jr., W.E.B. Du Bois Institute, Harvard University


Foley provides a powerful new perspective on the wartime and postwar evolution of racial ideology, the evolving legal logic (and illogic) of racial segregation, and the conflicts over strategy within and among black and brown activist organizations about how to dismantle America's racial regime.
-- Thomas Holt, University of Chicago


One of the most comprehensive and significant works available on race and the possibility of multiracial coalitions during the World War II and postwar eras in the United States.
-- George Sanchez, author of Becoming Mexican American


Neil Foley reveals a history of race relations that is sadly overlooked, or worse, denied. For those of us with deep border/barrio roots, who have held the secret knowledge of the racial tension that still claws at the peripheries of our communities, it is long overdue. We need and deserve more brave scholarship like this.
-- Luis Urrea, author of The Devil's Highway


While Foley ably explores American efforts to end discriminatory practices, he is at his best reviewing the Mexican-American experience, and how 'Mexican and African Americans pursued their struggles for equality…in largely parallel universes.' When Mexico's foreign minister banned Texas from receiving Mexican contract workers under the 1943 bracero program due to the state's 'extreme and intolerable racial discrimination against Mexicans,' the legislature attempted several times to pass an antidiscrimination bill that could embrace Mexicans as Caucasians. Its failure rested in the fear that 'to enact laws to end discrimination against Mexicans might also strike a blow against Jim Crow laws and customs segregating black Texans.' …Foley's accessible history shines fresh light upon the regional issues that make American conceptions of racial and national identity so tangled.
-- Publishers Weekly


This concise, important work considers the possibilities but ultimate failure of the African American and Mexican American communities to unite in their struggle for civil rights.
-- D. O. Cullen Choice