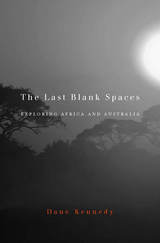 For a British Empire that stretched across much of the globe at the start of the nineteenth century, the interiors of Africa and Australia remained intriguing mysteries. The challenge of opening these continents to imperial influence fell to a proto-professional coterie of determined explorers. They sought knowledge, adventure, and fame, but often experienced confusion, fear, and failure. The Last Blank Spaces follows the arc of these explorations, from idea to practice, from intention to outcome, from myth to reality.

Those who conducted the hundreds of expeditions that probed Africa and Australia in the nineteenth century adopted a mode of scientific investigation that had been developed by previous generations of seaborne explorers. They likened the two continents to oceans, empty spaces that could be made truly knowable only by mapping, measuring, observing, and preserving. They found, however, that their survival and success depended less on this system of universal knowledge than it did on the local knowledge possessed by native peoples.

While explorers sought to advance the interests of Britain and its emigrant communities, Dane Kennedy discovers a more complex outcome: expeditions that failed ignominiously, explorers whose loyalties proved ambivalent or divided, and, above all, local states and peoples who diverted expeditions to serve their own purposes. The collisions, and occasional convergences, between British and indigenous values, interests, and modes of knowing the world are brought to the fore in this fresh and engaging study.

REVIEWS
Scholars and biographers have tirelessly eulogized, analyzed and demystified individual explorers, but the field has long lacked a synthesizing study of overland exploration… As with all grand comparative works, subsequent scholars will no doubt spend decades picking critical holes in Kennedy’s convincingly systematic survey. But this will only confirm the breadth and originality of The Last Blank Spaces, which successfully extracts a coherent and illuminating narrative from a bewildering array of texts, archives and institutions.
-- Brian H. Murray Times Literary Supplement


The Last Blank Spaces is magisterial in its sweep, thorough in its exegesis of exploration, and compelling in its careful dissection of what the explorers accomplished and what they failed to accomplish.
-- Robert I. Rotberg American Historical Review


Considering Australia and Africa together enables Kennedy to dispel the fog of romance that still envelops the figure of the explorer and to make some cogent observations on imperialism, the organization of knowledge, nationalism, and the role of indigenous people in facilitating exploration.
-- Norman Etherington Australian Book Review


With publication of The Last Blank Spaces, Dane Kennedy has breathed new life into the well-worn narratives of explorers and exploration in Africa and Australia… Rather than simplification, Kennedy complicates both the process of exploration and the explorers engaged in it by reading primary sources against the grain, by avoiding and questioning heroic stereotypes, by looking for inferences and by examining discourse in a creative but controlled fashion. He writes engagingly and clearly, thus attracting both the savant and those with little detailed knowledge of the field… The differences and similarities of exploring these two continents and the men engaged in this activity are truly illuminating and make for fascinating reading… This book deserves a wide readership.
-- Jane Carruthers Australian Historical Studies


The Last Blank Spaces is particularly worth a read for historians of other nineteenth-century empires… The Last Blank Spaces at once surprises and makes the reader wonder why no one has thought to look at this subject in this way before… Kennedy raises new and provocative questions in the long and often fraught conversation about power, class, and race on the margins of the British Empire.
-- Toby Harper H-Net Reviews


It is a rare book that is scholarly, well-written, and accessible—while being enlightening and often fascinating. This is one such and Dane Kennedy should be congratulated… I found this book especially interesting in the accounts of the relationships explorers formed with their key guides and informants—who sometimes even helped plan the expeditions… Dane Kennedy gives human will and effort their due, accords the explorers their humanity, but shows how metropolitan outreach and conquest, followed by latter-day metropolitan nostalgia, are imperial. The terrains and societies they encountered were complex and difficult—not pure and pastoral, not arcadian. But, for the sheer complexity the explorers faced, and how they faced them, in looking at their immediacies, Dane Kennedy shows an astute soft spot.
-- Stephen Chan Australasian Review of African Studies


As a result of Kennedy’s excellent analysis, we see more clearly what Australian exploration was, and what it was not.
-- Jim Davidson The Australian


Kennedy’s analysis gains by acknowledging the courage of most explorers and the respect some held for the people whose lives they would change forever. He builds our understanding of their circumstances but less so of their longer-term importance in shaping the futures of two continents. The most significant thing about the explorers from Europe is that what they encountered became part of a new worldwide network of knowledge.
-- Stephen Wilks Canberra Times


This fine book breathes new life into the history of exploration. In a fresh and creative way, Dane Kennedy juxtaposes the familiar stories of the European exploration of Australia and sub-Saharan Africa, enlivening the histories of both continents… [The] precise and elegant prose carries the reader effortlessly forward.
-- Henry Reynolds Inside Story


Kennedy sorts through a far more complicated and messy history of 19th-century British exploration than the record has assumed, taking into account much failure as well as a deep reliance on indigenous help. The author asserts that the first British explorers of Australia and Africa looked to the vast continents much as the seafaring explorers had regarded the sea before them, as great unknown oceans, blank spaces to be ‘measured, mapped, quantified, classified, catalogued, and compared.’ …Kennedy teases out a fascinating comparative study of Australian versus African exploration thattakes into account the early British settlers’ colonies in the former and the richly entrenched indigenous societies and forbidding disease environment in the latter… A wealth of research for the armchair traveler and historian.
-- Kirkus Reviews


Triumphalist narratives of European trailblazers leave out complexity and conflict, along with the contributions of indigenous peoples, according to this probing social history of 19th-century imperialist British exploration… Kennedy shrewdly dissects the ideology of exploration as the adventurous standard-bearer of progress and sets it against the record of British explorers confronting sophisticated, canny, contentious locals with their own agendas and formidable resources. These locals helped, thwarted, and sometimes even took command of European expeditions. Kennedy’s erudite yet highly readable study restores much of the nuance and drama that has been airbrushed out of standard accounts of Western exploration.
-- Publishers Weekly


Nineteenth-century explorers did not merely discover the truths about landscapes and peoples they encountered: instead, as Dane Kennedy shows, they created new ways of knowing them, shaped as much by colonial realities as by metropolitan science. A masterful study of exploration.
-- Felix Driver, author of Geography Militant: Cultures of Exploration and Empire


In this beautifully written and strikingly original account of British exploration of Africa and Australia in the nineteenth century, Dane Kennedy demonstrates the limits as well as the violence of imperial power and the vulnerability as well as the vainglory of the explorers. The vast ‘blank spaces’ of the European imagination in fact sustained complex and ancient civilizations, whose peoples challenged even as they helped produce the explorers’ knowledge of the world.
-- Marilyn Lake, coauthor of Drawing the Global Colour Line: White Men’s Countries and the International Challenge of Racial Equality


Groundbreaking and deeply satisfying, The Last Blank Spaces provocatively argues that the blank spaces on nineteenth-century maps of Africa and Australia actually represented the limits of western knowledge. This marvelous book delivers on the promise of the ‘new imperial history’ by providing a refreshingly original perspective on imperial power in the age of exploration.
-- Timothy Parsons, Professor of African History, Washington University in St. Louis