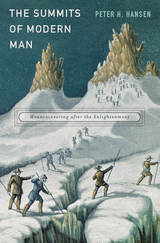 The history of mountaineering has long served as a metaphor for civilization triumphant. Once upon a time, the Alps were an inaccessible habitat of specters and dragons, until heroic men—pioneers of enlightenment—scaled their summits, classified their strata and flora, and banished the phantoms forever. A fascinating interdisciplinary study of the first ascents of the major Alpine peaks and Mount Everest, The Summits of Modern Man surveys the far-ranging significance of our encounters with the world’s most alluring and forbidding heights.

Our obsession with “who got to the top first” may have begun in 1786, the year Jacques Balmat and Michel-Gabriel Paccard climbed Mont Blanc and inaugurated an era in which Romantic notions of the sublime spurred climbers’ aspirations. In the following decades, climbing lost its revolutionary cachet as it became associated instead with bourgeois outdoor leisure. Still, the mythic stories of mountaineers, threaded through with themes of imperialism, masculinity, and ascendant Western science and culture, seized the imagination of artists and historians well into the twentieth century, providing grist for stage shows, poetry, films, and landscape paintings.

Today, we live on the threshold of a hot planet, where melting glaciers and rising sea levels create ambivalence about the conquest of nature. Long after Hillary and Tenzing’s ascent of Everest, though, the image of modern man supreme on the mountaintop retains its currency. Peter Hansen’s exploration of these persistent images indicates how difficult it is to imagine our relationship with nature in terms other than domination.

REVIEWS
[A] learned and complex analysis of 'multiple modernities' as seen through the prism of mountaineering… One of the most revealing accounts of the Everest expedition that I have read.
-- Adam Thorpe Times Literary Supplement


[A] marvelous book...The Summits of Modern Man handily dispels rosy visions of the past...putting the lie to the contention that mountaineering was a once noble, principled pursuit that has only recently deteriorated.
-- Colin Dickey Los Angeles Review of Books


In this treatise on peak bagging and its post-Enlightenment significance, Peter Hansen unearths stories with a crampon-like grip. We meet star summiteers such as Michel-Gabriel Paccard and Jacques Balmat, who both ascended Mont Blanc in 1786; nineteenth-century 'golden age' alpine mountaineers like physical scientist John Tyndall; and Edmund Hillary and Tenzing Norgay on Everest. But with today's retreating glaciers, Hansen reminds us that the idea of what it means to 'conquer' nature needs reconfiguring.
-- Nature


In his monumental work on mountaineering Peter Hansen explores the intricacies of climbing and theorizes on the act's social and psychological significance. The book under review is a serious engagement with men and mountains from the vantage points of social history, eco-critical theorizing and cultural geography...The Summits of Modern Man is a phenomenal achievement; it links facts, figures, and theory into one powerful and intriguing tale of the trekkers who ventured in to the vertical heights of mountains in search of solitude and victories...The Summits of Modern Man is not just another book on mountain climbing. It is an inquiry into the making of the modern world.
-- Murali Sivaramakrishnan The Hindu


In this wide-ranging and subtle cultural history of climbing, Peter H. Hansen explores our evolving relationship with the rocky heights. At the center of this (beautifully presented) study is the paradox that mountaineering, the ultimate team pursuit, has been mythologized as an individualistic contest.
-- Michael Kerrigan The Scotsman


[Hansen] focuses on the relationship between climber and mountain, the ropes that link humankind to the natural world, and how people have defined themselves through the summits they have ‘conquered.’ Nowhere is Hansen better than when he details the complex and varied meaning of the first successful Everest summit. Climbing, for Hansen, is an ascent into the clouds of ideas and images, and nature, as much as humans, is at the center of his quest.
-- R. W. Roberts Choice


Peter H. Hansen has long been known to specialists in the field of climbing history as a tireless researcher, subtle theorist, and compelling storyteller. The publication of The Summits of Modern Man brings him to the summit of mountaineering scholarship.
-- Maurice Isserman, Hamilton College


No one writes more interestingly about mountains and mountaineering than Peter Hansen. He is one of the best cultural historians of mountaineering out there.
-- Stewart Weaver, University of Rochester