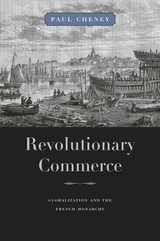 Combining the intellectual history of the Enlightenment, Atlantic history, and the history of the French Revolution, Paul Cheney explores the political economy of globalization in eighteenth-century France.

The discovery of the New World and the rise of Europe's Atlantic economy brought unprecedented wealth. It also reordered the political balance among European states and threatened age-old social hierarchies within them. In this charged context, the French developed a "science of commerce" that aimed to benefit from this new wealth while containing its revolutionary effects. Montesquieu became a towering authority among reformist economic and political thinkers by developing a politics of fusion intended to reconcile France's aristocratic society and monarchical state with the needs and risks of international commerce. The Seven Years' War proved the weakness of this model, and after this watershed reforms that could guarantee shared prosperity at home and in the colonies remained elusive. Once the Revolution broke out in 1789, the contradictions that attended the growth of France's Atlantic economy helped to bring down the constitutional monarchy.

Drawing upon the writings of philosophes, diplomats, consuls of commerce, and merchants, Cheney rewrites the history of political economy in the Enlightenment era and provides a new interpretation of the relationship between capitalism and the French Revolution.

REVIEWS
A fascinating, thoroughly researched, and beautifully written intellectual history depicting the emergence of the novel eighteenth-century 'science of commerce.' A major asset of the work is that while Montesquieu serves as its central figure, the reader learns about so much more, including the relationship between commerce and statecraft, the prevalence of social-scientific comparisons between absolutism and republicanism in the century before the American and French revolutions, and the birth of philosophical history. Cheney shows great skill in elucidating the sometimes dense works of eighteenth-century economists in language that is at once remarkably spare and vivid. Lucid, lively, and informative, this book was truly a pleasure to read.
-- Mary D. Lewis, author of The Boundaries of the Republic


This engaging book powerfully conveys the dual sense of opportunity and risk felt by the thinkers, politicians, and merchants who experienced the eighteenth century's global revolution in commerce. With sensitive and precise attention to the language and concerns of the writers he treats, Cheney makes an excellent case for rejecting conventional narratives such as the transition from a mercantilist to a laissez-faire phase of French economic thought. This is a signal contribution to the emerging literature about the place of colonies and global commerce in French revolutionary politics.
-- Jennifer Pitts, author of A Turn to Empire


In this ambitious and timely book, Cheney argues that the pressures of globalization strained French political institutions and social structures, issuing in the revolutionary transformations of the 1790s. By focusing on the economic thought of the old regime, which was preoccupied with the challenges of international competition, he shows how globalization became central to political debate. Revolutionary Commerce makes a major contribution to the intellectual history of the old regime and to debates on the origins of the French Revolution.
-- John Shovlin, author of The Political Economy of Virtue


The very intelligent, novel, and meaningful achievement of this book is to show how and why France's eighteenth-century colonies--in the Caribbean mostly--mattered critically to the French reading and writing public's understanding of their country's economic and political place in the world.
-- Patrice Higonnet Times Literary Supplement