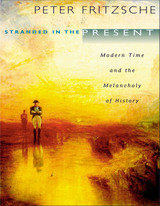 In this inventive book, Peter Fritzsche explores how Europeans and Americans saw themselves in the drama of history, how they took possession of a past thought to be slipping away, and how they generated countless stories about the sorrowful, eventful paths they chose to follow.

In the aftermath of the French Revolution, contemporaries saw themselves as occupants of an utterly new period. Increasingly disconnected from an irretrievable past, worried about an unknown and dangerous future, they described themselves as indisputably modern. To be cast in the new time of the nineteenth century was to recognize the weird shapes of historical change, to see landscapes scattered with ruins, and to mourn the remains of a bygone era.

Tracing the scars of history, writers and painters, revolutionaries and exiles, soldiers and widows, and ordinary home dwellers took a passionate, even flamboyant, interest in the past. They argued politics, wrote diaries, devoured memoirs, and collected antiques, all the time charting their private paths against the tremors of public life. These nostalgic histories take place on battlefields trampled by Napoleon, along bucolic English hedges, against the fairytale silhouettes of the Grimms' beloved Germany, and in the newly constructed parlors of America's western territories.

This eloquent book takes a surprising, completely original look at the modern age: our possessions, our heritage, and our newly considered selves.

REVIEWS
Peter Fritzsche's prose is both elegant and arresting, his insights always interesting. Stranded in the Present will attract a wide audience not only of experts but of general readers interested in how modern culture constructs its own past.
-- James Sheehan, Stanford University


An elegantly written book on an important and long neglected topic. Peter Fritzsche weaves a fascinating tale of how we came to our sense of modern time and the consequences of it. I expect this book to become a standard point of reference for the argument that the notion of modern time had an abrupt 'beginning' in the French revolutionary and especially Napoleonic wars. These upheavals created a kind of nostalgia about the past, that is, for what was lost in the transition to the modern. Thus melancholy and the conviction that our times are distinctly modern go hand in hand. Stranded in the Present provides an accessible, thoughtful, and even beautiful example of how to think about the category of time. It will be much discussed in many different circles.
-- Lynn Hunt, University of California, Los Angeles


In an evocatively titled work, Fritzsche conveys the disruption of time-honored social customs and intellectual assumptions in Prussia, France, Britain, and the United States caused by the French Revolution. More profound and ideological than its predecessor in the American Colonies, the French Revolution was similar to World War I in the proportion of civilian and military casualties, the collapse of old political systems, the new visibility given to the military in cultural life, and the anomie induced among writers and common folk alike. Drawing upon letters, journals, and resurgent fairy tales by the likes of the Brothers Grimm, Fritzsche reveals how many people recognized their contemporaries as fellow 'time comrades,' affected by a new concept of history that was no longer circular but linear.
-- Frederick J. Augustyn Library Journal


Fritzsche argues forcefully and convincingly for the revolutionary mindsets that accompanied the events of the [French] Revolution and its seemingly endless aftershocks. The creation of a new sensibility about the place of the individual in the drama of history provides the impetus for Fritzsche's work, which traces the dislocations experienced by individuals living through these literally unsettling times...A rich cultural history that draws upon an impressive array of sources to create a tapestry of this new historical awareness...The work is written quite well, making it accessible to a wide readership beyond specialists in modern history. Its style is evocative, eloquent, at times poetic. The author effectively captures the richness of the period under investigation, roughly 1780-1850. We meet some lesser-known figures in the history of Western Europe and the United States, as well as some more familiar names whose stories are told in intriguing ways. Fritzsche's readings of primary sources are sound, at times quite illuminating, and his mastery of secondary literature on a wide variety of topics stands out, revealing the challenge and reward of writing this type of cultural history. In a word, Stranded in the Present is an enjoyable and informative work whose relatively short length disguises its richness and depth.
-- Matthew E. Brown H-Net Reviews


Fritzsche's book surveys the culture of everyday, postrevolutionary life, turning up a surprising range of provocative details about the melancholy that the rupture of the French Revolution effected, creating the sense of the past as lost. Drawing mainly from letters, memoirs, biographies, journals, fiction, and poetry, rather than "official documents" of the period, Fritzsche's study brings us closer to the intimate effects of large-scale historical change, above all to the self-conscious "historicization of private life."...What is most exciting about the study, however, is cumulative: The way in which Fritzsche imagines an alternative to the choice between rupture and continuity in the sense of history. The sense of rupture, Fritzsche's study helps us to see, was the necessary predecessor to self-conscious engagement with the past, and the only creative means forward.
-- Emily Rohrbach Studies in Romanticism


Stranded in the Present offers an insightful treatment of the modern period and the changing concept of historical time.
-- Bette W. Oliver Libraries and Culture


[An] inspiring book...A brilliant study on the history of the making of remembrance and of our feelings toward the past.
-- Hasso Spode Journal of Social History


Peter Fritzsche has given us a bold and ambitious book which will confirm his status as one of the leading intellectual and cultural historians of modern Europe...Fritzsche marshals a fascinating array of evidence, ranging from well-known products of the Romantic period like the writings of Francois-Rene Chateaubriand, William Cobbett, the Grimm Brothers, and Sir Walter Scott to those of more obscure but no less interesting personalities, such as the German art collector Sulpiz Boisserée and Friedrich Schlegel's wife Dorothea, whose correspondence Fritzsche mines to good effect...Who, after finishing Fritzsche's book, will be able to think about the early nineteenth century as other than lost, fragmented, ruptured, shipwrecked, dispossessed, melancholic, broken, nostalgic.
-- Robert Wohl Modernism/modernity