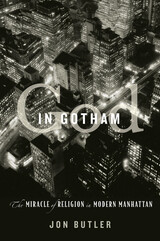 A master historian traces the flourishing of organized religion in Manhattan between the 1880s and the 1960s, revealing how faith adapted and thrived in the supposed capital of American secularism.

In Gilded Age Manhattan, Catholic, Jewish, and Protestant leaders agonized over the fate of traditional religious practice amid chaotic and multiplying pluralism. Massive immigration, the anonymity of urban life, and modernity’s rationalism, bureaucratization, and professionalization seemingly eviscerated the sense of religious community.

Yet fears of religion’s demise were dramatically overblown. Jon Butler finds a spiritual hothouse in the supposed capital of American secularism. By the 1950s Manhattan was full of the sacred. Catholics, Jews, and Protestants peppered the borough with sanctuaries great and small. Manhattan became a center of religious publishing and broadcasting and was home to august spiritual reformers from Reinhold Niebuhr to Abraham Heschel, Dorothy Day, and Norman Vincent Peale. A host of white nontraditional groups met in midtown hotels, while black worshippers gathered in Harlem’s storefront churches. Though denied the ministry almost everywhere, women shaped the lived religion of congregations, founded missionary societies, and, in organizations such as the Zionist Hadassah, fused spirituality and political activism. And after 1945, when Manhattan’s young families rushed to New Jersey and Long Island’s booming suburbs, they recreated the religious institutions that had shaped their youth.

God in Gotham portrays a city where people of faith engaged modernity rather than foundered in it. Far from the world of “disenchantment” that sociologist Max Weber bemoaned, modern Manhattan actually birthed an urban spiritual landscape of unparalleled breadth, suggesting that modernity enabled rather than crippled religion in America well into the 1960s.

REVIEWS
Are you there, God? It’s me, Manhattan…Butler…argues that far from being a Sodom on the Hudson, New York was a center of religious dynamism throughout the 20th century…[He] reminds us that New York was a center for Catholic religious orders too, their numbers rivaling any city’s except Rome.
-- Katrina Gulliver Wall Street Journal


In his enthralling God in Gotham, Butler takes us through the mighty city’s neighborhoods, traditions old and new, and bustling heterogeneous populations to illuminate the ways diverse Manhattanites have organized themselves in pursuit of community and faith. I learned something rich and surprising on every single page of this compelling book, as fascinating as Gotham itself.
-- Elizabeth Alexander, President, Andrew W. Mellon Foundation


Enlightening and engaging, God in Gotham chronicles the collision of religion and modernity in Manhattan with incredible skill. Butler not only reveals traditional religious forms challenged and changed by their confrontation with a secular city, but also a major metropolis sacralized by the work of the faithful. A must-read for anyone in search of the soul of America.
-- Kevin M. Kruse, author of One Nation Under God


A masterwork by a master historian. Butler’s lively multidisciplinary, multidenominational book will serve as a model for all future work on the subject. God in Gotham should be an instant classic.
-- Jonathan D. Sarna, author of American Judaism


What a pleasure it is to take a tour of Manhattan’s sacred past led by one of the nation’s preeminent religious historians…Butler offers yet one more reason why contemporary Americans might want to ask hard questions the next time they hear someone declaiming against urban places. The worlds of the city, the suburbs, and beyond are more interdependent than we sometimes think. And an unrelenting pursuit of the divine is common to them all.
-- Heath W. Carter Christianity Today


Elegantly written and persuasively argued…You cannot put this book down without feeling that Sin City has gotten a bad rap from the media. The metropolis has long been characterized by deep religious feeling and expression…This is a major book on a major topic in American history. It will complicate our judgements about the nation’s biggest city.
-- Kenneth T. Jackson Gotham


An expansive work on a sweeping subject. Butler persuasively argues that religion flourished rather than foundered in Manhattan—not in spite of modernity but precisely because of the ways diverse communities of faith engaged with modern structures, sensibilities, challenges, and opportunities. He shows religious traditions as fluid, dynamic, and resilient.
-- Heather D. Curtis, author of Holy Humanitarians


With lively prose, fascinating accounts, and riveting analysis, Butler transforms our understanding of urban religion and the very meanings of modernity as he convincingly portrays a city at once notably secular and a religious ‘hothouse.’ Whether considering the uses of urban space, the impact of racial segregation, or the significance of technologies such as electricity, radio, and sound recordings, he has produced nothing less than a distinctive urban history as well. God in Gotham is history at its finest.
-- Michele Mitchell, author of Righteous Propagation


Butler’s marvelous contrarian intelligence is on full display, as is his silky smooth prose. Could any other author help us better understand James Baldwin, Abraham Heschel, Norman Vincent Peale, and Dorothy Day? Read God in Gotham as a primer on almost the whole of modern U.S. religious history and beyond.
-- John T. McGreevy, author of Catholicism and American Freedom


[An] illuminating history [of] why religious practice flourished in Manhattan during a period when urbanization and its associated ‘spiritual exhaustion’ were destroying it elsewhere…This eye-opening history is sure to enlighten anyone interested in cultural histories of New York City.
-- Publishers Weekly (starred review)


God in Gotham shows how religion in Manhattan thrived as the borough barreled along the leading edge of American modernity—defying the prophets of secularization who looked for piety to wither away. In elegant prose, Butler tours Manhattan’s evolving religious landscape, showing how the city’s crowded pluralism nurtured both ugly prejudices and brilliant theological breakthroughs that left a lasting imprint on American culture well beyond New York.
-- Molly Worthen, author of Apostles of Reason


If I were still teaching Introduction to Religion in American History, I would assign Jon Butler’s God in Gotham, with its excellent cameos of Reinhold Niebuhr, Paul Tillich, Abraham Heschel, Dorothy Day, the Reverends Adam Clayton Powell Jr. and Sr., and other great or notorious divines who shaped Manhattan’s religious landscape from the Gilded Age to the Sixties.
-- Bob Carey The Metropole


Butler paints a landscape of religious vitality in arguably the heart of burgeoning modernity—Manhattan…[He] shows that religion adapted to modernity rather than being trampled on the concrete.
-- Justin McGeary Modern Reformation


Proves that ‘tools of modernity’ were also the tools of religion. Scholars of urban history, American religion, urban religion and modernity and secularism will find much to think with in God in Gotham’s compelling history of how congregations responded to the technologies, pace, and cityscape of Manhattan to engage with ‘the enchanted,’ not turn away from it.
-- Alyssa Maldonado-Estrada Journal of Ecclesiastical History


Serves as a reminder of how vital religiosity was to the old New York of 1900–1960…Butler gives readers a deeper sense of how ‘New York values’ were once a modus vivendi for religious pluralism that provided a broadly religious foundation for American culture. He believes that it could be so again.
-- James M. Patterson Law & Liberty


Spans the 1880s to the 1960s, arguing that contrary to the expectations of many, modern Manhattan did not suffocate organized religion…Will certainly resituate the place and significance of Manhattan for American religious life more broadly.
-- Justin McGeary Reading Religion


A splendid read, the most instructive feature of the work is the author’s ability to capture the resourcefulness of the city’s faith communities. With material drawn from the area’s rich collections, the work will remain a textbook model for courses on urban religion for a long time to come.
-- A.J. Scopino, Jr. Religious Studies Review