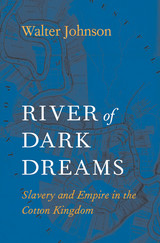 “[One] of the most impressive works of American history in many years.”
—The Nation

A landmark history, by the author of National Book Critics Circle Award finalist The Broken Heart of America, that shows how slavery fueled Southern capitalism.

When Jefferson acquired the Louisiana Territory, he envisioned an “empire for liberty” populated by self-sufficient white farmers. Cleared of Native Americans and the remnants of European empires by Andrew Jackson, the Mississippi Valley was transformed instead into a booming capitalist economy commanded by wealthy planters, powered by steam engines, and dependent on the coerced labor of slaves. River of Dark Dreams places the Cotton Kingdom at the center of worldwide webs of exchange and exploitation that extended across oceans and drove an insatiable hunger for new lands. This bold reconsideration dramatically alters our understanding of American slavery and its role in U.S. expansionism, global capitalism, and the upcoming Civil War.

Walter Johnson deftly traces the connections between the planters’ pro-slavery ideology, Atlantic commodity markets, and Southern schemes for global ascendency. Using slave narratives, popular literature, legal records, and personal correspondence, he recreates the harrowing details of daily life under cotton’s dark dominion. We meet the confidence men and gamblers who made the Valley shimmer with promise, the slave dealers, steamboat captains, and merchants who supplied the markets, the planters who wrung their civilization out of the minds and bodies of their human property, and the true believers who threatened the Union by trying to expand the Cotton Kingdom on a global scale.

But at the center of the story are the enslaved people who pulled down the forests, planted the fields, picked the cotton—who labored, suffered, and resisted on the dark underside of the American dream.

“Shows how the Cotton Kingdom of the 19th-century Deep South, far from being a backward outpost of feudalism, was a dynamic engine of capitalist expansion built on enslaved labor.”
—A. O. Scott, New York Times

“River of Dark Dreams delivers spectacularly on the long-standing mission to write ‘history from the bottom up.’”
—Maya Jasanoff, New York Review of Books

REVIEWS
With deep insights, original readings, expansive vision, and dramatic narratives, Walter Johnson reconfigures both the political economy of American slavery and the landscape of struggle in the slave South.
-- Steven Hahn, author of A Nation under Our Feet


River of Dark Dreams is a unique, brilliant, and relentless critique of the sordid logic of American slavery as it unfolded on cotton plantations, aboard steamboats plying the Mississippi, and in toxic proslavery adventures that spilled across the country’s borders. The next generation of debates over slavery in the United States must wrestle with Johnson’s startling and profound insights.
-- Adam Rothman, author of Slave Country


Johnson’s book attempts something daring and bold. Instead of perpetuating the regularly compartmentalized treatment of American slavery and the global antebellum political economy, he follows the example of Eric Williams’s Capitalism and Slavery (1944) by bringing both together. He does this with an eye toward the enslaved on the ground, observing what they ate and produced, how they lived, how they were brutalized and died. Johnson is brilliantly attuned to the stories of the enslaved whose lives were coexistent with the cycle of production, who planted and harvested cotton but were at the same time commodities themselves, whose every biological function (reproduction, waste elimination) was an economic calculation.
-- Lawrence P. Jackson Los Angeles Review of Books


River of Dark Dreams is an important, arguably seminal, book… It is always trenchant and learned. And in highly compelling fashion, it helps us more fully appreciate how thoroughly the slaveholding South was part of the capitalist transatlantic world of the first half of the 19th century.
-- Mark M. Smith Wall Street Journal


Johnson has written a book as big and bold as the Mississippi River valley region it surveys. In it, he maps the various interlocking connections among slavery, land surveys and speculation, steamboats, capital and credit, cotton planting, and more to show how President Jefferson’s promise of an ‘empire for liberty’ to come from the Louisiana Purchase became instead a place of people grasping for advantage, gouging for wealth, and gaining through will and brutality… An essential book for understanding the dynamism and direction of American economic ambitions and the human and environmental costs of the physical, political, and social energy that drove such ambitions and ended in civil war.
-- Library Journal (starred review)


River of Dark Dreams is at its best when it focuses on the day-to-day lives of slaves in the valley. Johnson empathizes with his subjects, allows them to speak for themselves through written records they left behind, and is a gifted enough writer to make the past come alive in his prose…Few books have captured the lived experience of slavery as powerfully as River of Dark Dreams.
-- Ari Kelman Times Literary Supplement


This most impressive piece of history writing will be a source of inspiration and debate for many years to come. It demonstrates the national significance of regional history and the transnational scope of ‘slave holding agro-capitalism.’ It has an overarching story to tell and argument to make, but many of its meaty chapters take a vital area of research and decisively reorder it.
-- Robin Blackburn Dissent


River of Dark Dreams solidifies Walter Johnson’s standing as a brilliantly gifted interpreter of the past, whose work sets the benchmark for a powerfully lucid—sometimes heart-wrenching—vision of what enslavement meant for slaveowners, for the women and men they enslaved, and for the nations that participated in the trans-Atlantic slave trade.
-- Jennifer L. Morgan, author of Laboring Women: Gender and Reproduction in New World Slavery


Johnson shows in horrific detail how the culture of slave society—intellectual, social, sexual—arose out of the imperative of more and more cotton cultivation. In a brilliant chapter titled ‘The Carceral Landscape,’ Johnson’s book reads as a kind of scholarly companion to Quentin Tarantino’s studiously gothic film Django Unchained… What makes Johnson’s book more than a catalogue of horrors is its account of how slave-owners, too, were caught in the cycle of fear… As new technologies (not only the cotton gin) and new markets (Europe as well as the industrializing North) drove the expansion of cotton production against any and all compunction, talk of ending slavery, which had once been central to debate about the future of the republic, became a deadly threat to the economy of the South and, to a significant degree, of the whole nation… Johnson’s point is not to equate the suffering of slaves with the anxiety of slaveholders; but his book has the effect of showing their interdependence in a way that makes the abstractions of political history—‘property,’ ‘expansion,’ even ‘slavery’ itself—feel vivid and immediate.
-- Andrew Delbanco New Republic


Walter Johnson’s River of Dark Dreams shows how the Cotton Kingdom of the 19th-century Deep South, far from being a backward outpost of feudalism, was a dynamic engine of capitalist expansion built on enslaved labor.
-- A. O. Scott New York Times


The artistry of River of Dark Dreams lies in the close-up—in Johnson’s mesmerizing attention to the ‘material’ in historical-geographical materialism. In the pointillist style so dexterously displayed in his reconstruction of the New Orleans slave market, Soul by Soul, Johnson zooms in on the ‘nested set of abstractions’ that made the Cotton Kingdom run: money, markets, maps, labor… River of Dark Dreams delivers spectacularly on the long-standing mission to write ‘history from the bottom up’: from the soil tangy and pungent with manure, and the Petit Gulf cotton plants rooted into it, and the calloused fingers plucking its blooming, sharp-edged bolls. This is a history of how wilderness became plantations that became states, nations, and empires—of how an overseer’s lashes sliced into a slave’s back turned ‘into labor into bales into dollars’ into visions of America’s future in the world… Johnson recreates the grinding, sometimes deadly work of moving in the Mississippi Valley with such originality that it doesn’t much matter that the analytical payoff rests largely in metaphor… Whereas Johnson’s analysis of steamboat imperialism turns on metaphor, his detailed description of slavery acts as a rebuke to the oversimple metaphors that are used to describe slaves’ lives and labor: money and markets.
-- Maya Jasanoff New York Review of Books


The American Civil War is still being fought. The racist inheritance of the South now permeates the collective unconscious of many who are taking their stand against African Americans and other people of color through this country’s racist legal and prison system and also through cutbacks in government that fall most heavily on those whom this society dragged across oceans to enslave and exploit. To understand the dynamics of the present, we must perceive the peculiar way in which racism is intertwined with a global system of economic exploitation that continues to flourish, rewarding some while disinheriting many others. Walter Johnson’s magnum opus puts the economy of slavery at the center of American history. His account succeeds in avoiding the sort of vulgar Marxist reductionism that misses the depth of human suffering that reached an apex in the first sixty-five years of the nineteenth century—suffering which in its modern twenty-first century manifestations continues to exact a heavy price from the bodies of African Americans and from the emotional well-being of everyone else. Johnson’s detailed account of the Cotton Kingdom prepares us to understand the later manifestations of oppression and imperialism that have shaped much of the world ever since slavery was officially abolished (but more plausibly taken into new forms and globalized).
-- Tikkun


As the Harvard historian Walter Johnson explains in his bracing new history of slavery and capitalism in the Deep South, River of Dark Dreams, the slaveholders were the quintessential American capitalists… River of Dark Dreams…casts his insight about slavery-as-capitalism onto a broader canvas: the history of the Mississippi Valley and its political economy in the first half of the nineteenth century. Johnson, of course, is hardly the first historian to think about slavery in the context of capitalism… But Johnson moves in another direction. The relationship between slavery and capitalism, he insists, does not depend on any connection between American slavery and European (or American) industry. On the contrary, plantation slavery was capitalism.
-- Robin Einhorn The Nation


[One] of the most impressive works of American history in many years.
-- Timothy Shenk The Nation


An important book… Johnson sees slavery not just as an integral part of American capitalism, but as its very essence.
-- Sven Beckert Chronicle of Higher Education


Johnson’s luminescent prose lends moral weight to the harrowed tribulations of the past, but he also has a keen geographical imagination that captures the spatial upheavals, the recurring conflicts and contradictions over land and water, that marked the history of slavery and capitalism in the Mississippi Valley.
-- Peter James Hudson Boston Review

TABLE OF CONTENTS
Contents
Introduction: Boom
1. Jeffersonian Visions and Nightmares in Louisiana
2. The Panic of 1835
3. The Steamboat Sublime
4. Limits to Capital
5. The Runaway’s River
6. Dominion
7. “The Empire of the White Man’s Will”
8. The Carceral Landscape
9. The Mississippi Valley in the Time of Cotton
10. Capital, Cotton, and Free Trade
11. Tales of Mississippian Empire
12. The Material Limits of “Manifest Destiny”
13. “The Grey-Eyed Man of Destiny”
14. The Ignominious Effort to Reopen the Slave Trade
Notes
Acknowledgments
Index