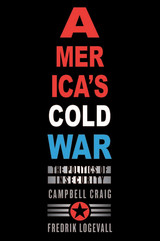 The Cold War dominated world affairs during the half century following World War II. It ended in victory for the United States, yet it was a costly triumph, claiming trillions of dollars in defense spending and the lives of nearly 100,000 U.S. soldiers. Apocalyptic anti-communism sharply limited the range of acceptable political debate, while American actions overseas led to the death of millions of innocent civilians and destabilized dozens of nations that posed no threat to the United States.

In a brilliant new interpretation, Campbell Craig and Fredrik Logevall reexamine the successes and failures of America’s Cold War. The United States dealt effectively with the threats of Soviet predominance in Europe and of nuclear war in the early years of the conflict. But in engineering this policy, American leaders successfully paved the way for domestic actors and institutions with a vested interest in the struggle’s continuation. Long after the U.S.S.R. had been effectively contained, Washington continued to wage a virulent Cold War that entailed a massive arms buildup, wars in Korea and Vietnam, the support of repressive regimes and counterinsurgencies, and a pronounced militarization of American political culture.

American foreign policy after 1945 was never simply a response to communist power or a crusade contrived solely by domestic interests. It was always an amalgamation of both. This provocative book lays bare the emergence of a political tradition in Washington that feeds on external dangers, real or imagined, a mindset that inflames U.S. foreign policy to this day.

REVIEWS
This is a creative, carefully researched, and incisive analysis of U.S. strategy during the long struggle against the Soviet Union. There are plenty of good books on this topic already, but Craig and Logevall’s is one of the best, and their interpretation has important implications for contemporary strategic debates.
-- Stephen M. Walt Foreign Policy


Campbell Craig and Fredrik Logevall accomplish something amazing: in a mere 370 pages of text they present a cogent, well-written, highly informative, yet accessible narrative of the forty-five-year history of the Cold War… Together they bring a level of expertise to more facets of the Cold War than the vast majority of single-authored works could possibly emulate… There is much to applaud in this work and the authors will, I am sure, reap many accolades because of it. Due to its brevity and jargon-free writing style the book will be especially useful for undergraduates as well as the general public, but even specialists will find it worth reading.
-- Gregory Mitrovich American Historical Review


It is an excellent history, providing the best treatment of the question, ‘Who ended the Cold War, Reagan or Gorbachev?’
-- H. Nelsen Choice


Craig and Logevall compellingly argue that the American experience in the Cold War must be understood in terms of the interplay between domestic and international politics. American history, political culture, and raw partisanship shaped attitudes and responses just as encounters with the USSR affected internal politics, economy, and society. This is an important book that will be read for years to come.
-- Robert Jervis, author of American Foreign Policy in a New Era


A landmark study that takes a remarkably fresh approach to the Cold War, asking not only how it began or ended but why it lasted so long. The answer—that the U.S.–Soviet confrontation was perpetuated largely by the imperatives of American electoral politics and an ever expanding military–industrial complex—demands the serious attention of anyone interested in global affairs, past or present. Craig and Logevall remind us that American foreign policy is decided as much by domestic pressures as external threats. America’s Cold War is history at its provocative best.
-- Mark Atwood Lawrence, author of The Vietnam War: A Concise International History


In this beautifully incisive and important reinterpretation of U.S. foreign relations history, Craig and Logevall demonstrate why Cold War America could never shake its own insecurity complex. It is a must read, not simply for understanding U.S. national security in the second half of the twentieth century, but for insight into why the politics of insecurity persist.
-- Timothy Naftali, coauthor of One Hell of a Gamble


Much ink has been spilled on the history of the Cold War, but Craig and Logevall have written a wholly new and original book. In beautiful, compelling prose, America’s Cold War unearths the inner dynamic of American foreign policy by highlighting its intimate but hidden links with both domestic politics and economics. With its revealing insights into the partisan political influence upon U.S. foreign policy, this brilliant book offers a timely reminder that politics doesn’t always stop at the water’s edge.
-- Andrew Preston, author of The War Council: McGeorge Bundy, the NSC, and Vietnam


A refreshingly incisive analysis of U.S. foreign policy during its long struggle with the Soviet Union. Craig and Logevall show how the interplay of structural forces and domestic politics led U.S. leaders to consistently exaggerate foreign threats, leading to costly misadventures that squandered much blood and treasure and inflicted considerable harm on other countries. Their judgments are subtle and balanced, the writing is clear and concise, and the implications for today’s leaders are profound.
-- Stephen M. Walt, author of Taming American Power