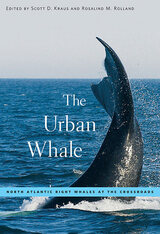 In 1980 a group of scientists censusing marine mammals in the Bay of Fundy was astonished at the sight of 25 right whales. It was, one scientist later recalled, “like finding a brontosaurus in the backyard.” Until that time, scientists believed the North Atlantic right whale was extinct or nearly so. The sightings electrified the research community, spurring a quarter century of exploration, which is documented here.

The authors present our current knowledge about the biology and plight of right whales, including their reproduction, feeding, genetics, and endocrinology, as well as fatal run-ins with ships and fishing gear. Employing individual identifications, acoustics, and population models, Scott Kraus, Rosalind Rolland, and their colleagues present a vivid history of this animal, from a once commercially hunted commodity to today’s life-threatening challenges of urban waters.

Hunted for nearly a millennium, right whales are now being killed by the ocean commerce that supports our modern way of life. This book offers hope for the eventual salvation of this great whale.

REVIEWS
Whales depend on sound for intraspecies communication, and according to one of the studies republished in this book ‘the chance of two animals hearing each other today has been reduced to 10 percent of what it was one hundred years ago.’ Add imprecise (but real) threats such as general habitat loss and degradation, and, of course, climate change, and you begin to understand why the North Atlantic right whale is under siege. Will we stand by and watch the last of the great whales vanish? Scott D. Kraus and Rosalind M. Rolland, who wrote the final chapter of The Urban Whale, are not optimistic, but they are not without hope.
-- Richard Ellis Times Literary Supplement


The book has been superbly edited, and to my mind each chapter is as clear, concise, informative, and downright pleasant to read as the next. While it is certainly a science treatise written by the world’s experts on the species, there is much intelligently summarized information, and very little in the way of primary figures and tables to bog us down. Instead, black and white photos are sprinkled throughout, and a color plate section occurs in the middle, to illustrate the whales themselves, their behavior, research techniques, and aspects of habitat such as temperature and chlorophyll. Each chapter begins with a personal vignette, in logbook fashion, of an experience with a particular whale, a thought about conservation management needs, or a similar non-scientific treatise. These notes lend a personal, almost romantic, air to the text… I recommend The Urban Whale for all those interested in whales, problems of fishing and shipping, and marine vertebrate conservation. I also recommend it to students and educators who wish to discover first-hand how superb thought and editing can produce one of the finest books on a marine mammal I have read in quite some time.
-- Bernd Würsig Quarterly Review of Biology


[T]his book deserves to be studied with care by all marine biologists, but certainly read as well by everyone concerned with the cavalier relationship we have with the wildlife with which we share the planet.
-- Arthur Westing Brattleboro Informer


Some readers might be put off by a book of nearly 600 pages written by a group of 35 scientists, but they shouldn’t be, at least in the case of The Urban Whale. Those who have seen a whale, or hope to see one someday, will find much of interest in this comprehensive resource on North Atlantic right whales… [T]here are captivating descriptions of right whale behavior and clear, concise summaries throughout this book, as well as 32 pages of color photographs and illustrations.
-- Lee Bumsted Gulf of Maine Times


In all, the authors have done an admirable job in putting this volume together. It is a visual delight, with a nice section of color plates in the Lentex, and well reproduced black and white illustrations throughout. The book succeeds in being a valuable reference to those in the field, by providing a useful summary of our current knowledge. It also serves as a valuable work for students, both undergraduate and graduate, by providing them with promising avenues of study that could be undertaken to advance our state of knowledge. It is also a powerful tool for managers who need this compendium at their fingertips… [It] should be on the shelf of everyone with an interest in this highly endangered and urbanized whale species.
-- Mason Weinrich Marine Technology Society Journal


The Urban Whale is the story of a population of 300 right whales living on the east coast of North America, facing a host of real and potential threats to their survival and procreation, many of them human-related. Seventeen chapters summarize the background and present the results of 25 years of research into this population, but it is the tales of the individual whales themselves—tragic Churchill, intrepid Shackleton, inspiring Calvin and the peripatetic Porter—that bring home the realities of the situation to the reader. This book is destined to become a classic amongst individual-based studies of mammal populations.
-- Peter Best, Extraordinary Professor, University of Pretoria, South Africa


This book tells an extraordinary story about one of the most compelling endangered species on the planet and it does so with great lucidity and depth. It also carries a fascinating subtext: the Herculean work of dozens of scientist-detectives who are struggling to unravel the mysteries of these creatures in time to prevent their extinction.
-- Malcolm L. Hunter, Jr., University of Maine


Hunted to near extinction, the long-suffering right whales are now endangered by massive fast-moving ships and fixed fishing gear. If they survive, it will be in part thanks to this long-term study by Kraus and Rolland. They bring to the page both deep scientific understanding and intimate knowledge of these remarkable animals. This seems destined to become the definitive book on right whales for years to come, though I hope that some time soon a sequel about the species’ successful recovery—not its extinction—will follow.
-- Joe Roman, Environmental Policy Fellow, American Association for the Advancement of Science, and author of Whale


This book is a must for anyone interested in the plight of whales and their conservation. It describes the efforts of a group of biologists to understand why, nearly a century after whaling ceased, the right whale population off the eastern seaboard of America has not rebounded. Central to their research is a catalog of every individual right whale in the North Atlantic, tracking their 300 lives amid the dangers and detritus of our industrial culture. The authors present a sobering view of the threat our modern way of life poses to wildlife, but they balance this with their intense commitment to find a way to prevent the extinction of the right whale. Let us hope that they succeed.
-- Peter L. Tyack, Woods Hole Oceanographic Institution

TABLE OF CONTENTS
Cover
Title Page
Copyright
Dedication
Contents
Preface
List of Marine Species
Abbreviations
1. Right Whales in the Urban Ocean
2. Near-Annihilation of a Species: Right Whaling in the North Atlantic
3. Right Whales Tell Their Own Stories: The Photo-Identification Catalog
4. Surveying for Discovery, Science, and Management
5. Enormous Carnivores, Microscopic Food, and a Restaurant That’s Hard to Find
6. High Investment, Low Return: The Strange Case of Reproduction in Eubalaena glacialis
7. Right Whales Past and Present as Revealed by Their Genes
8. The Inner Whale: Hormones, Biotoxins, and Parasites
9. External Perspectives on Right Whale Health
10. Acoustic Communication: Social Sounds and the Potential Impacts of Noise
11. Listening to Their World: Acoustics for Monitoring and Protecting Right Whales in an Urbanized Ocean
12. Right Whale Mortality: A Message from the Dead to the Living
13. The Entangled Lives of Right Whales and Fishermen: Can They Coexist?
14. Running the Gauntlet: Right Whales and Vessel Strikes
15. Right Whales and Climate Change: Facing the Prospect of a Greenhouse Future
16. The Big Picture: Modeling Right Whales in Space and Time
17. The Urban Whale Syndrome
Appendix A: Permit Information
Appendix B: Opportunistic Contributors to the Right Whale Catalog
Appendix C: Other Resources
Acknowledgments
Contributors
Index